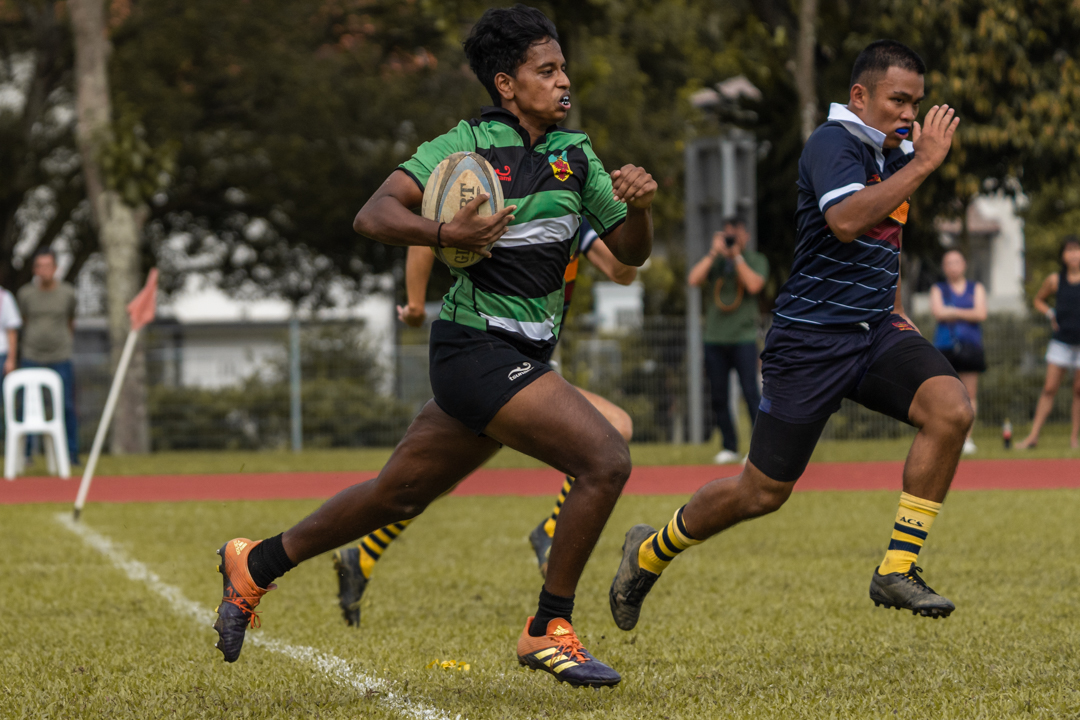 RI’s Dhanasekeran Janaardhanaprabu breaks through the ACJC defence and made a half-field run to score. (Photo 1 © Bryan Foo/Red Sports)

MOE (Evans Road), Wednesday, May 4, 2022 — Watched by a coterie of returning student and parent supporters, Raffles Institution beat Anglo-Chinese Junior College 32-22 on aggregate in a close semi-final to earn a spot in the final in the A Division Rugby National School Games.

Decisive tries scored by Tyler Leong (#25) in the first match-up and Dhanasekeran Janaardhanaprabu (#21) in the second helped the Rafflesians edge out ACJC 17-10 and 15-12. RI will play Anglo-Chinese School (Independent) in the final scheduled for May 6, in a repeat of the 2019 final, the last time NSG rugby was contested before the Covid-19 pandemic.

The return of NSG rugby was not without some changes due to the prevailing Covid-19 situation. Instead of the usual 15-a-side rugby union matches, this year’s matches were 7-a-side affairs, with each school fielding two teams of 15 registered players each. The first team played a match of 7-minute halves against the first team of the opposing team, while another set of players played against each other in the second match. The winning school team was the one with the higher aggregate points total.

The A Division semi-finals saw the return of the boisterous atmosphere that characterised school sports in the past. Student supporters are allowed to cheer on their school mates from one side of the stadium following the easing of Covid social distancing measures. To prevent inter-mingling, parent supporters watched their sons play from the opposite end of the stadium.

ACJC drew first blood, with Ramanathan Annamalai (#11) scoring a try off a well-placed kick behind the Raffles lines. Kicker Alldan Chan (#28) was, unfortunately, unable to successfully make the conversion. Aiden Khoo (#10) put another 5 points on the board for ACJC with a try.

The Rafflesians were quick to reply with a pair of unconverted tries by Tristan Ang (#10) and scrumhalf Patrick Seow (#9) as the first half ended 10-10.

Raffles opened the second half with a try by Tyler Leong (#25), which Tristan Ang (#10) converted, taking the score to 17-10. The second half would go on without any further points added to the scoresheet.

With ACJC only trailing by 7 from the first game, it was all to play for — if they were to make their first A Division rugby Cup final since 2009.

The Rafflesians had other ideas though, as they swiftly extended their lead with a converted try by Lee Jhinng Hwee (#8). ACJC fought back with a pair of tries by Jaylen Ang (#22) and Aidan Toh (#17), and a successful conversion by Muhammad Elyas Amir (#2) to take a 12-5 lead, before Dhanasekeran Janaardhanaprabu (#21) scored two tries to secure the win for the RI boys.