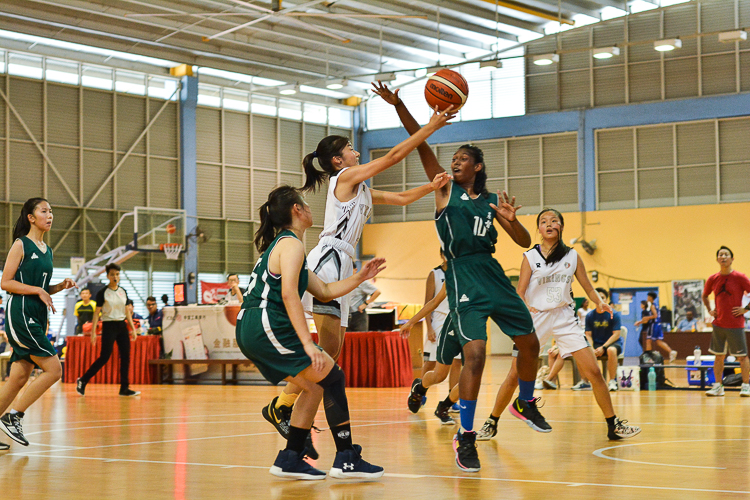 Xavlyn Yek (NV #7) is unfazed by the outstretched arms of Mayuri Lalique Mohan (CC #10) as she scores a basket. (Photo 1 © Zachary Foo/Red Sports)

Singapore Basketball Centre, Tuesday, July 30, 2019 — Resilient play by North Vista Secondary (NVSS) gave them the competitive edge against Christchurch Secondary (CCS) to put them over the top and win 45-25 in the semi-finals of the North Zone C Division Girls Basketball Championship. The win puts them through to the finals against Singapore Chinese Girls School (SCGS) in a bid to earn the zone championship.

NVSS captain, Chloe Luar (NVSS #27), accorded 18 points unto the scoreboard while a joint performance by Xavlyn Yek (NVSS #7) and Sammi Tan (NVSS #22) contributed a stellar performance by scoring six points each. The top scorer of CCS was Grace (CCS #7), who managed to put in a total of 10 points.

Chloe (NVSS #27) had this to say about the win: “We feel good because we made a comeback from the first half. It was only after the half-time talk, that we played a lot better as a team.”

Right from the first quarter, Xavlyn (NVSS #7) led the tireless half court press against CCS. Their defensive efforts proved to be efficient as it allowed for steals and fast breaks which converted to points for NVSS. In addition, tight man-on-man marking in the frontcourt causes CCS to make mistakes. These mistakes often caused ball possession to be handed over to NVSS.

The tight affair began when CCS settled their nerves and fought for possession. Though the first quarter ended before CCS could erase the point gap of 8-4, they remained motivated and hungry. Thus, CCS rode on the wave of increased morale into the second quarter. NVSS’ failure to make accurate passes were quickly intercepted, which resulted in a closely-matched second quarter.

However, after the break, NVSS came through with a sudden burst of energy and increased tempo. It seemed that they were determined to finish the game on the winning end, and aggressively took back every ball that was stolen from them. CCS were unable to catch up in time and this led to a huge point gap of 32-19 which secured a comfortable lead for NVSS.

Nevertheless, true sportsmanship was shown in the last quarter, where a spirited CCS refused to give an easy game to their opponent. CCSS began to retrieve every rebound, both on opponent’s and their ends. With the help of Iffa (CCS #5), they managed to obtain opportunities to shoot, though they had trouble scoring.

The last quarter was slow paced with many stoppages due to free throws and changes of possession. The both teams exhibited hunger for the ball and show it in their display on the court. This meant that it was not only hard to score, but maintain possession as well. Unfortunately for CCS, the point gap from the third quarter lasted through the end and rendered them unable to catch up to NVSS’ scoring momentum.

The game ended at 45-25, with NVSS taking the spot in the finals. With heads held up high, a confident Chloe (NVSS #27) added: “We are looking forward to play against SCGS. It is the first finals for most of us, so we are going to play our best no matter the opponent.”