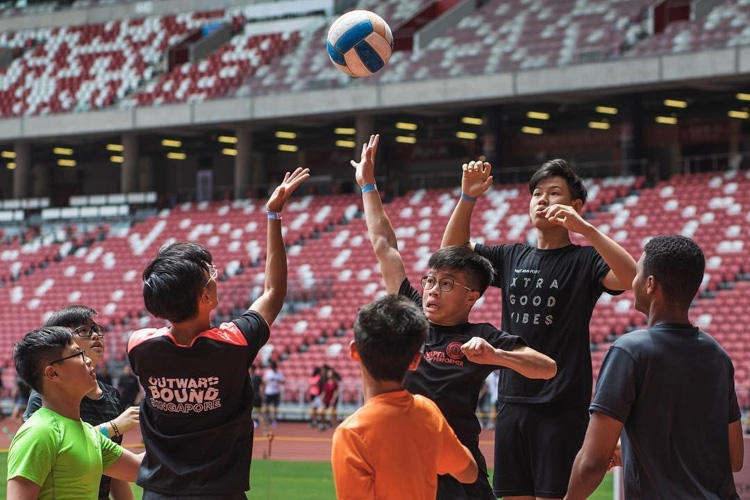 Sport teams made up of youths from all backgrounds fight it out in a game of Captain’s Ball. (Photo 1 © HIGHER)

National Stadium, Sunday, March 17, 2019 — On the striking dark red track of the National Stadium, several youth sports teams run, leap and throw a ball seamlessly to each other. They punch their fists in the air when they score, and pat fellow team players on the back to keep each other going.

But they are not familiar friends. In fact, most of the 500 youths met only a few hours before the start of the event.

Come Play Play is a sports meet open to all youths in Singapore organised by HIGHER, the youth arm of non-profit organisation City Harvest Church Services Association (CHCSA). HIGHER aims to bring youths from all walks of life together.

Regardless of school, background and even sports experience, youths came together to play a variety of sports, including Dodgeball and Captain’s Ball.

Julian Lee, the main organiser of the sports meet, believes in the power of sport to bring people together.

“We have always loved the idea of a massive sports carnival, where multiple games would be played continuously by hundreds of people in a single venue, all in a day,” said the 35-year-old.

He believes that in a sport meet, youths would learn invaluable skills from the sport and each other.

Julian said: “Through Come Play Play, many of them have witnessed first-hand that it is possible to strive hard in life, and yet at the same time show a caring heart to others who may be very different from themselves.” 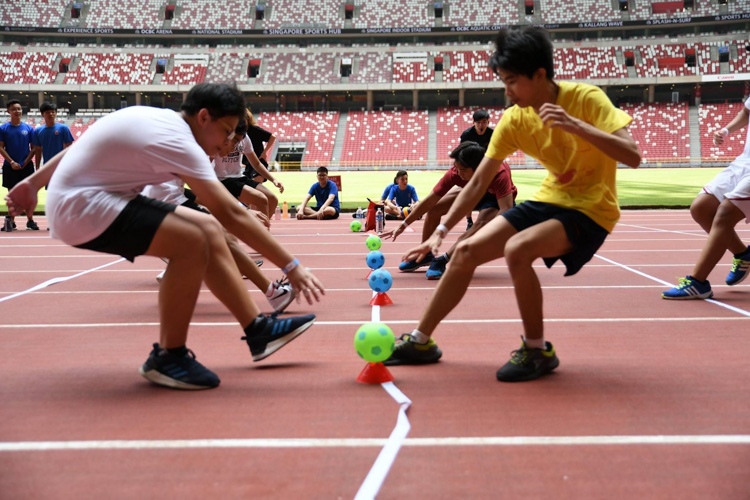 As the whistle sounds in a game of dodgeball, teams race to the middle line and grab the plastic balls, ready to attack. (Photo 2 © HIGHER)

While many were immersed in their games, youths could be found cheering for their teams. Bernice Hing, 16, from Hillgrove Secondary School, was one of them, even as she nursed an injury. “I screamed and cheered for my school teams; I was kind of like a cheerleader because my leg was injured and I couldn’t really play to my fullest potential.”

Bernice also took the chance to actively connect with other youths, starting right on her campus. She gathered friends, juniors and even friends’ of juniors to form teams made up entirely of Hillgrove Secondary School students. Eventually, they clinched the Best School Award that day, a recognition of their team spirit as a school.

Beyond her own school, Come Play Play was also a chance for Bernice to meet youths from different schools through other teams, which consisted of people she did not know from other campuses.

When asked how she felt about meeting new people, Bernice replied, “Honestly, I love making new friends even if they are not from my school. I think it was quite easy for me to just slot myself in and ask random questions. It is fun and really enjoyable to make friends that are not from your own school too, you can see the differences in the campuses.”

Since Come Play Play had the privilege to use the National Stadium this year, the final game was revealed to be a mixed gender relay.

Marcus Ho’s team won the mix gender relay race. When interviewed, the 19-year-old from Temasak Polytechnic said it was the most memorable moment of the day for him.

“It was the only competition that we won. It felt really good to see my friends taking part and winning,” said Marcus.

But the competition was not over yet. The youths were also challenged to connect with another silver-generation athletes who were more than twice their age. In a heartwarming inter-generational relay, youths were paired up with an elderly, racing against each pair to reach the finish line.

Jessie Lim, 20, from Republic Polytechnic, participated in the inter-generational relay. She recalled, “The experience was special and memorable because it’s actually my first time doing this. It was nice at the same time to see that there are actually so many people who are cheering them on when they are running, especially the younger generation.”

This is the third edition of Come Play Play, ever since its first run in 2017. Last year, HIGHER also spearheaded Singapore’s first carpark race for youths, Carpark King, a sporty event that got youths to race up Shaw Towers’ multi-storey carpark, conquering games and obstacles along the way.

HIGHER wants to continue reaching new heights. But in every event they plan, their heart for youths remains the same.

“We hope that we can continue to cultivate a strong and meaningful purpose for youths and provide a channel for them to build meaningful relationships, where they can rub off positive attitudes, values and energy on one another,” said Julian.