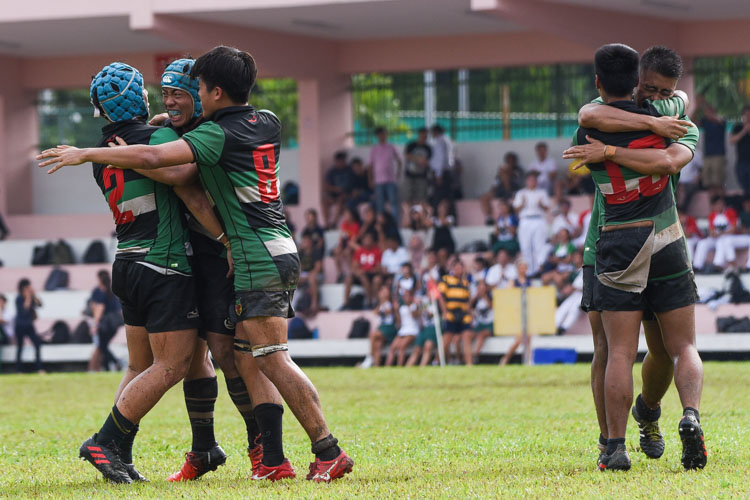 RI players celebrate after holding off a late Saints challenge to move on to their fourth straight A Division rugby final. (Photo 1 © Iman Hashim/Red Sports)

PSOEB, Wednesday, May 8, 2019 — Raffles Institution (RI) survived a late gutsy fightback from St. Andrew’s Junior College (SAJC) to edge past their traditional rivals 17-15 and book their place in the final of the National A Division Rugby Championship.

Raffles were headed for a flattering 17-5 win with only 10 minutes to go, before two unconverted Saints tries saw the boys in green-black-white having to hang on precariously in the dying seconds.

Said RI captain Gideon Kee (#19) of their performance: “I think my team performed well today, we followed the structure, we followed the game plan. Just that, at the end we had a slip of concentration which let (Saints) score twice.”

After the dust — and final-whistle euphoria — had settled, the RI boys were on a receiving end of a few harsh words from their coach during the post-match debrief. Gideon, though, insisted that his team deserved the chiding.

“I’d rather he be harsh now, than to sugarcoat things when we lose the final,” said the RI fly-half. “So I guess we understood where he was coming from and we know what we need to work on.”

RI appeared to be favourites prior to the match, having beaten the same opponents twice this season — 19-5 in the round robin stage and 14-5 at January’s 26th Kiwi Cup, an annual traditional contest between both teams — but the Saints were never to be written off, especially since a topsy-turvy round of results in the preliminaries saw RI losing to Anglo-Chinese Junior College (ACJC) whom SAJC beat convincingly.

And the warning shots were fired right from the start of the match, with Saints scoring an unconverted try via Kiane Rashidale (SA #8) as early as the third minute.

RI were shaken, but they soon regained their groove with a penalty by scrum-half Bervyn Wong (RI #10) to cut the deficit to two.

“I think for this game especially, we switched things up, and we knew that mistakes would happen. And the worst thing that could happen was giving away a try so early in the game,” said captain Gideon (RI #19). “There were still 55 minutes to come back, so I think that mistake, we took it as it didn’t happen, we reset from there, and we played with our structure without letting that affect us.”

Gideon proved to be instrumental down the middle for RI with a couple of mazy runs, and his efforts earned a tangible reward at the stroke of half-time. Following a scrum inside Saints’ 22-metre line, Gideon bravely intercepted an attempted SAJC kick clearance with his arms, and duly dived past the try-line with the ball.

The Raffles boys extended their lead again 10 minutes after the restart, with another converted try this time via Jonathan Christopher Lim (RI #9). Once again capitalising on a Saints mistake, the ball was intercepted and saw Javille Goh (RI #13) sprinting up the field before laying out to full-back Jonathan (RI #9) on the right flank, who dashed into the try zone and still had the composure to cut in to the centre for the touch-down.

Twelve up with only about one-sixth of the game to go, RI looked comfortable. But Saints were not about to back down.

The boys in blue and white first pulled five back with a try by Ryan Ham (SA #25). Gaining possession of a loose ball, he kicked the ball down the muddy pitch on the right wing before gathering it in his arms for the try. The pendulum had swung.

Moments after, Saints #12 looked destined to score when he side-stepped into open space and sprinted into RI’s 22, if not for a last-ditch tackle. A couple of rucks later, though, a pass out to the left flank saw Matthew Ng (SA #15) hurl himself over the try-line. The Saints were ecstatic — the comeback was there for the taking.

As his teammates huddled together, Saints #17 readied himself for the conversion which would have brought the scores level. Alas, he missed from the tight angle.

The Saints wasted no time from the restart, constantly pinning Raffles back in their half — but it was a case of too little, too late. The final whistle was blown to send RI into their fourth A Division rugby final on the trot.

It would take quite something, however, for them to dethrone five-time defending champs Anglo-Chinese School (Independent), who eased through their semi-final with a 39-7 thumping of ACJC. But Gideon (RI #19) believes.

“Definitely there is a chance,” said the Raffles captain. “Like I said this team has a lot of potential, though we are not forgetting that AC is a strong team that has been winning for many years.

“Despite that, we are putting that aside, every year is a new year. We are going there to play our best.”

We were unable to obtain the full team roster for SAJC. If you know the players’ names and jersey numbers, do drop us a comment below and the post will be updated accordingly.