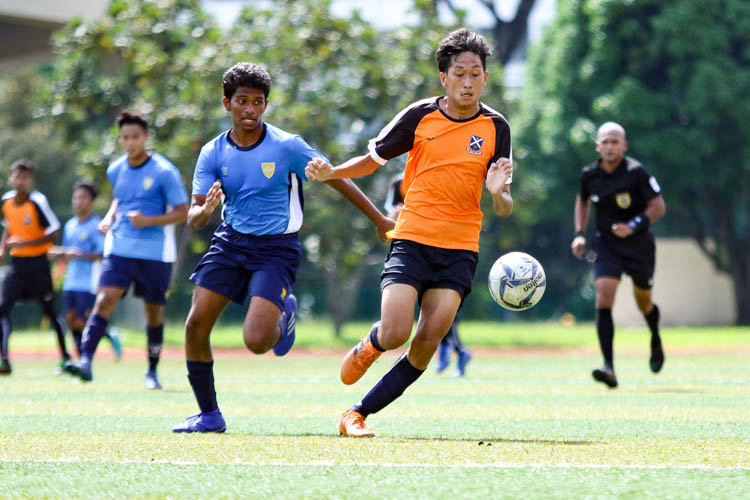 With SAJC going into the match knowing that a win or draw would ensure qualification into the next round, goal-scorer Naeemur Raham (#SAJC #14) reflected on the game and complimented his team’s attitude and performance, stating: “I’m really glad we all went into today’s game focused and I’m proud of how we performed today.”

As soon as the match kicked off, SAJC showed their attacking intent and started constructing opportunities to take the lead.

Just six minutes in, Zachariah Lim (SAJC #11) was presented with a golden opportunity to score the opening goal of the game. A lofted through-ball from midfield saw Zachariah speed clear of his marker and one-on-one with the keeper, but his volleyed attempt flew narrowly over the bar.

In the 11th minute, SAJC found themselves one-on-one with the CJC keeper yet again. This time is was Naden Joshua Timothy Koh (SAJC #10), whose powerful strike on goal was denied by Kendrick Lim (CJC #20).

The breakthrough finally came in the 24th minute when Naeemur Raham (SAJC #14) found himself with space at the edge of the box. He calmly dribbled the ball to his dominant right foot and firmly slotted the ball into the bottom left corner of the goal.

After he scored the first goal, Naeemur still felt no place for complacency saying: “I just wanted to keep my concentration after we took the lead.” This mentality helped him maintain his focus, and in the 38th minute Naeemur was able to find the back of the net again to extend SAJC’s lead.

The goal came after Enoch Lim’s (SAJC #7) work down the right wing saw him outmanoeuvre his marker and allow him to send a cross right into Naeemur’s path on the edge of the six-yard-box. The SAJC number 14 made no mistake and finished the ball on the volley to double SAJC’s lead.

The teams went into the half with the score at 2-0.

The second half saw CJC step up and succeed in getting more possession of the ball. CJC’s captain Lionel Tiong (#1) commented: “We had a shaky first half causing us to concede the two goals of the game. The half-time talk by our coach was crucial as it put us in the right mindset despite the two-goal deficit, allowing us to play a better game in the second half.”

Despite the disappointing result, captain Lionel Tiong (CJC #1) praised the efforts of his team saying: “I was delighted to see that they did not give up in the second half and continued to strive.”

Seeing that this was CJC’s final fixture of the tournament as they were unable to qualify for the semi-finals, Lionel ended off by saying a few words to his team: “It has been a pleasure to be able to lead you guys in this tournament and even though we have not hit our goal of becoming top 4, I’m still proud of what we have achieved together.”

For SAJC, this win ensures that they top their Round Two matrix table and head for the semi-finals. Their semi-final match will be on Monday, May 13 against Tampines Meridian Junior College.