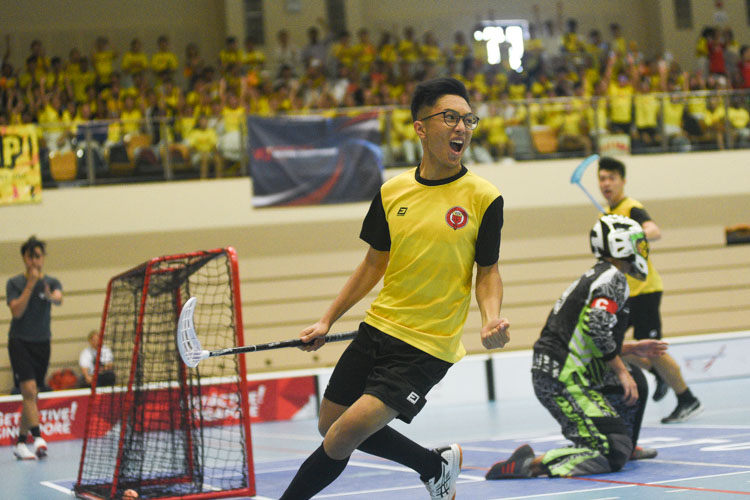 Our Tampines Hub, Tuesday, May 7, 2019 — In a face-off between two undefeated teams this season, Victoria Junior College (VJC) came out on top against Raffles Institution (RI) to win 6-4 as they look to clinch their second National A Division Floorball title in three years.

It was an evenly-contested match between the two powerhouses with VJC’s early goals being the main difference. Defending champions RI have gone unbeaten in six matches before this game with a tight defence that only conceded three goals so far. But within the first five minutes of the first period, they have already conceded the same number of goals conceded in all six of their group matches.

The early lead was definitely not expected by the VJC team, said Darius Phua (VJC #67).

“We really didn’t expect (the early goals) but from the beginning, we really wanted to give them a good pressure from the start because we knew that for Raffles, they didn’t have a very strong opponent in the round one,” said the VJC captain, who felt their tough grouping with Tampines Meridian Junior College and Eunoia Junior College gave them an edge.

“So we wanted to be the first one to hit them hard and we did,” added Darius.

The RI boys in black looked shell-shocked in the opening minutes as VJC blitzed them with their high pressing and swift counter-attacks. Mikail Sumono Ramli (VJC #23) opened the scoring after VJC managed to intercept the ball right after the face-off during their first attack. Riding on their momentum, Fares Aqil (VJC #65) quickly doubled their advantage with another goal in the second minute of the game.

It was only then that RI settled into their rhythm. But they still couldn’t stop VJC’s skipper Darius from scoring the third goal in the fifth minute following a fortunate deflection. Raffles finally pulled one back mid-way through the period through Brandon Chen (RI #23) who scored from point blank after receiving a cross from the left.

RI depended more on their intricate build-up play while VJC were capitalising a lot on quick counter attacks and intense pressuring which forced mistakes from their opponents.

The second period was a much more open affair and the momentum was clearly swinging towards RI as VJC took their foot off the pedal.

“The beginning of the second period, we were starting to get a little bit sloppy, and we weren’t pressuring Raffles as hard as we were supposed to,” admitted Darius after the match.

Sensing an opportunity, RI attempted to mount a comeback and was aided by Tham Hao Wei (RI #17) who had multiple chances in the opening minutes. He finally converted one in the 18th minute after receiving a slick through pass by Jayden Tan (#7) down the middle to narrow the deficit to just one goal.

But their comeback was disrupted by a stunning goal by Kaung Zin Ye Naung (VJC #10). Against the run of play, Kaung ran onto a long ball from defence by Amir Hamdan (VJC #25) and in one smooth motion, caught it on the bounce with a volley to smash the ball into the net to loud cheers from the VJC bench.

RI’s outstanding Muhammad Alfian (#13) then tried to swing the momentum back to his team and managed to shorten VJC’s lead again towards the end of the second period when he pounced on a mistake by the VJC defence to score from a tight angle. But VJC quickly replied with another goal through Sanjeevan Selvam (#55).

The second period ended with the score at 5-3.

VJC edged closer to booking their spot in the final when Meximmus Ow (#66) scored their sixth goal midway through the final period as the boys in yellow capitalised against a four-man RI team, who had Hao Wei (RI #17) out in the sin bin.

A missed penalty by Muhammad Alfian (RI #13) was a blow to RI’s chances to advance. Hao Wei (RI #17) would eventually add a second to his tally with a goal in the dying minutes of the game, combining well with Muhammad Alfian to score but RI eventually had to settle for the third and fourth match.

“Of course losing sucks, but then I think we played hard right from the start… we might have gotten a shock at the start but I think after that we played much better,” said RI’s captain Dylan Wong (#19).

VJC will now play against Eunoia Junior College, who dominated their semi-final with a 6-1 win, as RI battle for third place against River Valley High on May 15 at Our Tampines Hub.