National A Div Basketball (Boys): HCI top Group D with 60-38 win over TJC to progress to next round 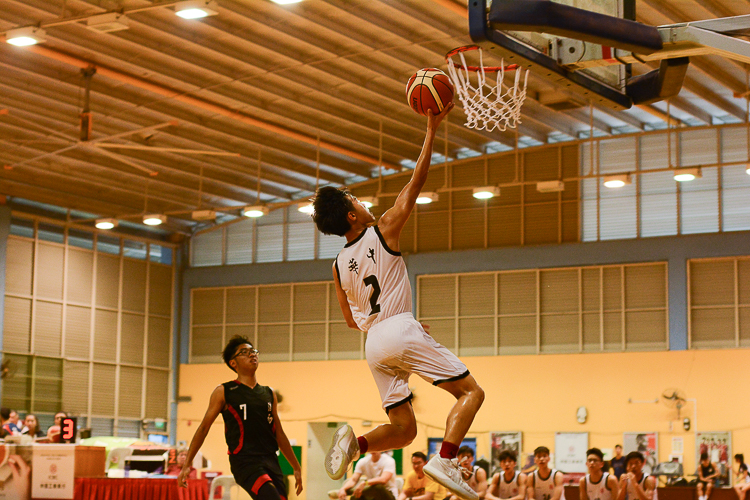 Lim Jing Jie (HCI #2) shows perfect form on this lay-up. HCI progressed to the next round behind Jing Jie’s 15-point effort, which led all scorers. (Photo 1 @ Zachary Foo/Red Sports)

Singapore Basketball Centre, Wednesday, May 2, 2019 — Hwa Chong Institution (HCI) punched its ticket in the next round of the National A Division Basketball Championship with a convincing 60–38 win over Temasek Junior College (TJC). The win means that HCI will progress to the next round as the top seed in Group D.

TJC drew first blood with a quick lay-up in traffic by TJC #14. However, HCI showed their mettle by responding with a 12–0 run, mostly by capitalising on TJC turnovers generated HCI’s full court press. TJC struggled with their execution on offence early on, seemingly having their passing and rhythm rattled by HCI’s press.

The second quarter was a more tepid affair, as both teams struggled to put points on the board. TJC settled down on offence and were able to generate open looks, but their players were unable to convert these opportunities. On the other hand, HCI struggled in the half-court, instead relying on their press to generate turnovers leading to easy lay-ups on the other side.

TJC changed tack in the third quarter, seeking to get to the rim more frequently. However, they either lost the ball to the HCI press or could not convert these opportunities at the room. As such, the lead stretch further past the 20-point mark by the end of the quarter.

TJC showed that they were not going down without a fight in the final quarter, starting off with a 7–0 run. HCI responded immediately, making use of good fundamental basketball to regain the 20-point lead midway through the quarter. TJC’s fightback lost its steam towards the end and HCI eventually emerged 60–38 victors. As a result of this win, HCI gained the top seeding for the group, ensuring that they would have a favourable pairing in the next round.

HCI Captain Ondre Tann (HCI #3) had this to say about the win: “I think this group was difficult given the teams involved. Our loss to CJC in the previous match was important for us as it served as a wake-up call to our team. It showed us that we needed the right mindset for each game and that we have to respect any opponent that comes before us.”

HCI Vice-Captain Dong Hun, who is unable to play due to an injury, added: “I hope our team is able to finish the season on a high and that we do well. Team-bonding is especially important and I think the matches have shown that we are able to do that together as a team.”

TJC Roster
We were unable to obtain the roster for Temasek Junior College. If you know any of the players, kindly post them in the comments below and we’ll update the post. Thanks.