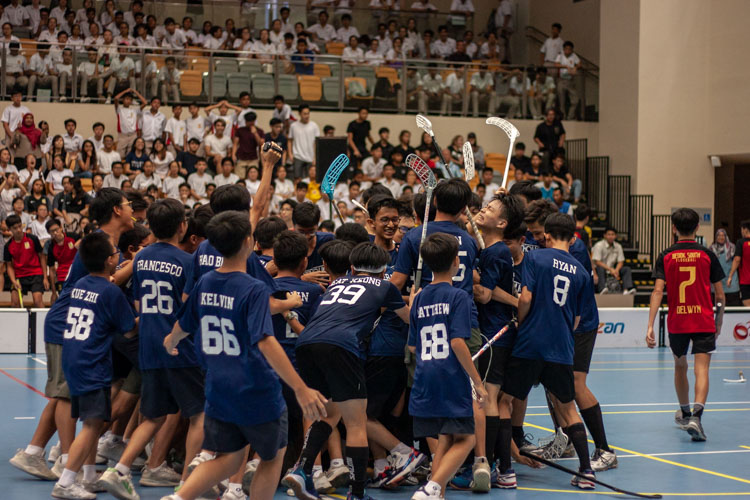 Our Tampines Hub, Tuesday, April 9, 2019 — Having won all but one of their matches throughout the season, it is of no surprise that Catholic High School (CHS) took home the crown for this year’s National B Division Boys’ Floorball Championship.

However, unlike the complete dominance on the scoreboard like they had in earlier matches, Bedok South Secondary (BDS) put on a spectacular fight and threw CHS off-guard, culminating in a final score of 2-1.

“We had lost the previous year, and really wanted to win the crown back this year,” said Alexander Lim (CHS #4). “That’s why this victory meant everything to us. We clinched the victory, something we couldn’t have done without each other.

“No matter what, the team will have your back, and going through difficulties together is much easier than facing it alone.”

Right from the buzzer, CHS put up an aggressive front by high-pressing the opponent’s defenders despite losing the first face-off.

While the effort was tiring, the hunger to win the ball quickened the pace of the match.

Within seven minutes, the first goal from CHS was scored by Tan Jia Hao (CHS #12), who squeezed the ball into goal after observing a tight spot not covered by the keeper.

Though the next few minutes were filled with many shots on target by CHS, the Bedok South defenders put up a combative stance.

The invulnerable defense provided an avenue for a counter-attack to be taken by Heng Tze Yi (BDS #20), who scored the equaliser in the very last minute of the first period.

With 1-1 reflected on the scoreboard, the second period carried on with a greater tempo. This time, Bedok South adopted a patient and tactical playing style while Catholic High continued with their aggressive gameplay.

Much like the first period, shots were met with a sturdy defense and counter-attacks were issued out one after another, but no goal was conceded for the first few minutes.

Unfortunately for Bedok South, two of their players were sin-binned for two minutes due to foul play, leaving two men on court against the four from CHS.

Though the lack of players on court resulted in the Bedok South goalie having to catch the ball at every attempt, the teamwork between both players and goalie ensured that it was a clean two minutes.

However, Choo Keat Keong (CHS #39) took centre-stage and out-dribbled every player on court, finding himself one versus one with the BDS goalie. With a clean fake to the left, he took the ball and shot it to the right of the goalie, earning a one-goal advantage for Catholic High which they managed to hold on to until the end of the match.

On the other hand, although Bedok South went into the last period with a deficit, they showed commendable spirit by playing their hearts out.

Even when two BDS players faced a two-minute penalty again in the last minute of the game, Shaqil Bin Mohammed Dalis (BDS #31) and Kim Changgeon (BDS #3) proved themselves worthy opponents by never letting the ball past their defense.

“I think that this year’s season was a great, thrilling and unforgettable experience,” shared Bedok South captain Changgeon (BDS #3). “We worked really hard to get to where we are now.”

“As it was the first time that our B Division team has managed to get into the final, it was truly an accomplishment for all of us,” he added. “Despite setbacks and doubts during the season, we kept our confidence high and expectations low. With this mindset, we were able to perform much better.

“All in all, I’m extremely proud of my teammates and appreciative of each and everyone of them.”