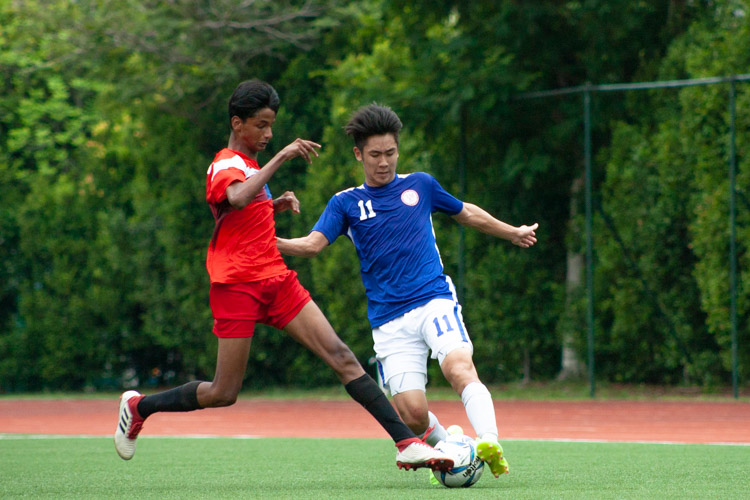 A midfield battle takes place as both teams vie for the ball. (Photo 1 © REDintern Jordan Lim)

After the game, Jordan Ng (TMJC #11), who scored the penalty, said: “Today’s game was a real test for us to see just how disciplined and ready we are for the A Division. Throughout the game the boys managed to keep our cool and didn’t lose focus right from kick off.”

The TMJC team started off the goalscoring early on in the match, when in the third minute, Kaung Htet Lu (TMJC #6), toed in a ball in the box from a corner kick.

The corner, delivered by Jordan (TMJC #11), caused a scramble in the box, with the YIJC defenders struggling to clear the ball. Taking advantage of the confusion, Kaung (TMJC #6) who was covering the far post, used the opportunity to quickly toe the ball into the goal.

Just three minutes later, in the sixth minute of play, TMJC were awarded a penalty after a foul was committed by the YIJC defenders in the box.

Stepping up to the spot, Jordan (TMJC #11) was set to take the penalty.

“When I placed the ball on the spot my mind was focusing on the side I’ve chosen to slot the ball. I shut out any distractions, and completed the routine,” explained the second-year junior college student.

Confidently, he slotted the ball into the bottom right of the net to bring the score to 2-0 in just six minutes.

Stunned by the goals, YIJC were struggling to keep up with the pace and tempo of the match, but tried their very best to hold off the TMJC attack, with the defenders shouting instructions to each other.

The third goal for TMJC came a little over 10 minutes later when Kaung (TMJC #6) scored his second goal of the match.

Receiving a pass, he dribbled past defenders in the box to coolly pass the ball into the net, making the score 3-0.

In the 21st minute, YIJC were awarded a freekick, taken by Syabil Qusyairi (YIJC #18). However, the attempt at goal had too much power in it, and the ball sailed high above the crossbar.

Ten minutes later, YIJC almost scored an own goal when Jeremy Chin (YIJC #8) attempted to pass the ball back to the keeper. Not anticipating the pass, the keeper had already run out of the box, leaving the goal unguarded.

Luckily, the ball rolled out of play just mere centimetres shy of the left post, ensuring the score still stood at 3-0.

Three minutes later, in the 34th minute, Jordan (TMJC #11) claimed his brace as well, with an excellent solo goal from midfield.

Dribbling the ball past defenders, he ran the ball down the field. Blasting it into the top net from an acute angle, his goal drew loud cheers from the TMJC supporters present.

Just when it seemed as though the action for the first half was over, Hameezan (TMJC #23), scored an impressive goal from a corner kick.

Calmly taking the corner, his effort curved straight into goal at the far post, needing no touch from the TMJC players.

Sharing what he had told his team going into the second half, YIJC team captain Isaac Ong (YIJC #7) said: “Being down a few goals in the first half, I knew that some of my players were feeing discouraged, so I urged them to have fun and do our best no matter the outcome — because as long as they leave the field without any regrets, I’m happy enough for them as a leader and friend.”

True enough, the second half of the game was tougher for TMJC — the YIJC players were more tactically sound, tightening their defense. This made it much harder for the TMJC players to score in the second half, frustrating them even.

The second half of the game was an uneventful back and forth between both teams, as TMJC struggled to keep up with the change in tactics by YIJC.

On his team’s performance in the second half, Isaac (YIJC #7) said: “I felt like my team needed to find our balance in the game before we could execute our tactics. The results are unfortunate for us and we expected more out of ourselves, but in a game of football, nothing is ever predictable. I’m glad we were able to find our momentum coming into the second half and I think that helped us a lot in trying to withstand the attacking force and pressure that TMJC put on us.”

With the good defense by YIJC, the final score stood at 5-0, with no new goals scored in the second half.

Reflecting on the match, Jordan (TMJC #11) said: “YIJC is a very physical team, and to play against them required lots of grit and aggression to match up to them. They are a good team and well organised, and scoring against them wasn’t easy.”

“We definitely came into this game knowing our opponents’ reputation and expected the game to be a tough and physical battle. We tried our best to adjust our tactics to their style of play but still were unable to find the flaw in their system and exploit it soon enough,” he said. “They are a tough team to beat and their past competition records show that. But I’d like to congratulate them and wish them luck for their upcoming games as we fight for a spot in the next round.”

Encouraging his team, Jordan (TMJC #11) said: “Consistency is key, and we now focus on the next match. We’ve got a long way to go, let’s keep this up.”