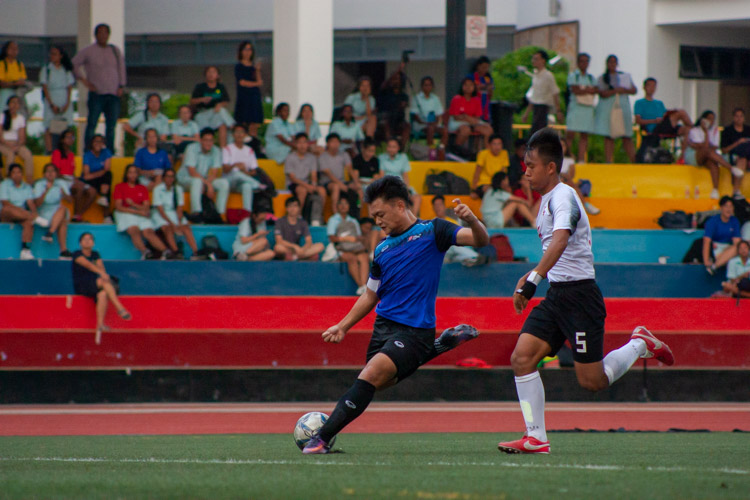 Millennia Institute, Monday, April 8, 2019 — It was a convincing win for Millennia Institute (MI) as they took on Hwa Chong Institution (HCI) in the preliminary round of the National Schools A Division Football Boys’ Championship. MI secured the win with three goals — two of which were scored in the second half.

When asked about the match, Zahier Zulkiflee (MI #2) said: “I felt it was a great match. Both teams out up solid performances, both sides had several wonderful opportunities. However, some moments of brilliance made the difference between both sides. A lot of fighting spirit was shown by everyone on the field, they definitely put in their all.”

The match started off slowly, both sides unsure if the game was going to be called off due to the looming thunderclouds in the distance. The previous match between Raffles Institution and National Junior College had ended prematurely at 74 minutes, due to the lightning alert.

MI were given early opportunities in the game, having been awarded a corner in the fifth minute of play. However, nothing came out of it, as the ball was quickly cleared away by the HCI defenders.

Another opportunity for MI came just six minutes later in the 11th minute in the form of a freekick. However, the header by Roy (MI #12) flew just shy of the far post.

HCI had a promising break in the 20th minute when they were awarded a freekick from the midfield. HCI captain Ong Kang Jun (HCI #10) stepped up to take the freekick, which flew dangerously at goal. The resulting freekick was spilled by a panicked MI keeper, but the MI defenders were alert and quick to defend.

Just two minutes later, in the 22nd minute, MI scored their first goal through Amrin Taufan (MI #6). Amrin chested in a cross from Louis Chng (MI #14) and tapped in a low goal just out of reach of the HCI keeper.

MI almost scored their second goal of the match just ten minutes later, when Ibrahim Halil (MI #7) dribbled past the HCI defense for a 1v1 with the HCI keeper, Tan Jing Xuan (HCI #1). Ibrahim chipped the ball calmly over the keeper to what seemed like a definite goal, but HCI defenders soon swarmed the box, deflecting the ball out for a corner kick.

“(At half-time) I told my team that we were doing well, and to keep up the intensity, to fight for the result and most importantly to trust in each other while doing so,” quipped HCI team captain Kang Jun (HCI #10).

HCI started off strongly in the second half, almost scoring the equaliser in the eighth minute. The break came during a HCI counterattack where Ethan Tan (HCI #13), fired a shot at goal. The ball was barely just deflected out by the MI keeper for a HCI corner.

HCI looked a better team in the second half, stringing more passes together and playing more confidently.

Despite better play by HCI, MI were still able to score their second goal of the game via a header by Louis (MI #14) in the 25th minute. It was an easy goal for MI, as Louis headed in the ball at close range into the back of the net, leaving the stunned HCI keeper helpless.

With the match coming to a lull in the last 15 minutes, it seemed as though the game would end with a final score of 2-0. However, MI’s last stunner was reserved for the final two minutes of play.

In the 38th minute, Zahier (MI #2) took a seemingly routine corner kick for an MI set-piece. However, there was nothing that needed to be done as the well-taken corner curved into the goal, hitting the far post before bouncing into the goal, to thunderous applause and cheering from the MI players and supporters alike.

With the sound of the referee’s whistle, the final score stood at 3-0.

When asked what the mentality going into the match was, Zahier (MI #2) said: “We went into the match with a winning mindset. We were disappointed with the previous result (0-0 draw against Temasek JC) and this match was the perfect opportunity for us to bounce back. We were confident and I am glad this was shown on the field today by the way we played. Overall, I am proud of the team’s performance and hope we can bring our form into our next matches.”

Adding on, he said: “HCI put up a good fight today. They displayed some quality and their defense was pretty disciplined. It took a while for us to finally get our breakthrough goal. Also, they were more physical than most of our players — but what we lacked in physicality we outplayed with our intelligent play.”

Similarly, Kang Jun said, “The match was a tough one, and although we gave our best, a few costly errors decided the game. Nevertheless, I’m proud of my team who never gave up on the fight throughout the game and pushed for each other.”

“I think that they’re definitely a strong opponent because of their great teamwork and effort on both ends of the pitch,” he said.

When asked whether he had anything to say to his team for the upcoming matches, Kang Jun (HCI #10) said: “We continue to fight for the next few games the way we did today and we won’t lose another game. We were unfortunate to have slipped up at crucial moments but we only look forward from here.”

Ending it off, Zahier said: “I would like to praise my team for putting up constant great performances these past few matches and hope we can continue to perform even better. The next few matches are going to get tougher so we’ll have to up our game and not become complacent. With the right mentality and attitude, I believe we would be able to reach greater heights as a team.”