National B Div Floorball: Victoria School and East Spring take turns to lead in intense match with score of 8-8 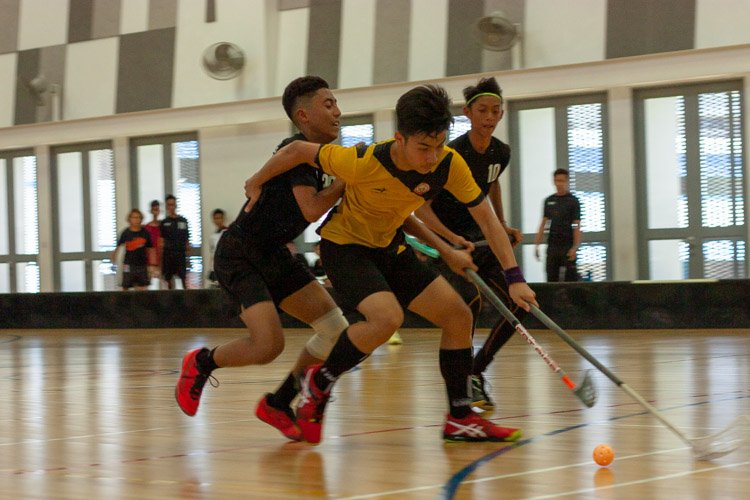 Holy Innocents’ High School, Wednesday, March 27, 2019 — The scoreline says it all. In one of the most intense matches of the B Division Boys’ Floorball preliminary round, Victoria School (VS) and East Spring Secondary (ESS) went head-to-head in a game of bob and weave, each team refusing to be defeated.

With a draw of 8-8, VS managed to claim top spot in the grouping, while ESS secured second position. Nevertheless, both teams advanced to the semi-finals on April the fourth.

“I thought it was an intense game. Both teams fought hard, but I think both teams also played well, and thus both deserved the win,” shared Victoria School’s Amir Haziq Bin Abdul Halim (VS #22).

“There were a lot of ups and downs, surely for East Spring as well. Our hearts were beating really fast, as we didn’t know if we would score or concede as the game was really tight.”

The game started off with a goal within the first two minutes, with a fast pace to match.

After gaining possession, East Spring’s Muhammad Ilhan (ESS #7) did a quick drag shot that sent the ball directly to the top corner of the net.

The goal seemed to boost their morale as East Spring continued to hold majority of ball possession.

Less than a minute later, East Spring’s Veshran Lingasvaran (ESS #11) did the same trick as his teammate, and in one motion, sent the ball from the side of the court to the back of the net.

At this point, VS maintained a strong defense, with Abdul Matin B Samri (VS #34) forming a one-man wall near the goalpost to prevent any more goals.

However, the defense could not hold back the rapid shots that were constantly fired from East Spring’s gun.

ESS’ Mohd Syabil Tijani (ESS #10) took his chance to take a shot, increasing the team’s lead as the VS’ goalie failed to catch the ball.

With a 3-0 lead by East Spring, Victoria School were clearly shaken, though still hungry for ball possession.

And the moment they got it, Ethan Wong (VS #36) sent a drag shot to the top left corner of the post, marking the first goal for VS.

The momentum began to build up for VS, as the ball started to be played strategically around the centre and sides.

Matin (VS #34) led the counter-attack, displaying team chemistry as they sent the ball to the net in one-two movement.

In the last few minutes, both teams were exchanging shooting attempts but no one conceded nor scored till the second period.

With one score down to ESS’ three, VS carried on to the second period with minds set on winning.

This was evident in that within two minutes, Muhammad Danial Bin Shazli (VS #37) hungrily snatched ball possession from ES, and shot to gain an equalising point for VS.

Iyad Syarf Bin Johari (ESS #26) displayed exemplary stick work as he tricked two VS defenders in the tight space behind the goalpost.

He then sent them stumbling over one another as he manoeuvered the ball into the goalpost through a neat and quick wrap-around, gaining back a one-point lead for ESS.

Unfortunately for ESS, they went on to the third period one man down through the referee’s call for a foul move.

VS showed no mercy, reverting immediately to power-play and sending a goal in through Matin (VS #34) with assistance from Amir Haiidar Bin Muhammad Khidhir (VS #23).

Equalisers after equalisers were scored, both teams evading defeat and fighting for the top spot.

When Muhammad Hezri Haizal Bin Wahindra (ES #23) sent in a clean open goal in the last two minutes, the coaches called for a time out.

At present, the score was down to 8-7, with VS gaining dominance and leading by one point.

As the game resumed, the intensity of the match was like no other, the boys sprinting their hearts out and fighting to steal or maintain possession.

While all seemed good for VS, hunger worn out on ESS’ side, and Nuqman Sharhan Bin Shahrian (ESS #16) took a shot in the centre to swing the ball into the goalpost with 20 seconds left on the clock.

His goal was the equaliser that ESS needed to take home and led to the 8-8 finish that only increased both teams’ hunger to fight again.

“We could have done a lot better,” said Veshran (ESS #11), who scored two goals for the team. “While we had a lead in the first period, we dribbled too much, and were not composed.”

“While we made a comeback during the third period, we could have converted many more chances into a goal. Nevertheless, I am sure that the team will do much better in the next round.”