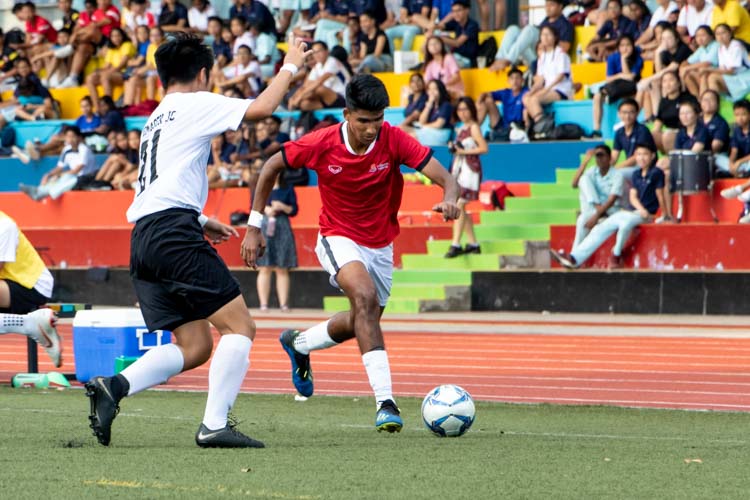 Millennia Institute, Thursday, April 4, 2019 — In a tight, hard-fought match between Millennia Institute (MI) and Temasek Junior College (TJC), both teams had to settle for a 0-0 draw in the preliminary rounds of the National Schools A Division Football Boys’ Championship.

Speaking about the draw, MI Team Captain Louis (MI #14) said: “I felt that personally, we deserved all three points considering our dominance throughout the entire game. But it wasn’t to be. However, to touch on my team’s performance, we had a classy game, maintained composure and played to the best of our abilities but were unlucky not to convert our numerous chances.”

It was a tough game for TJC as well, having to constantly defend the various shots by the MI attackers.

Commenting on the game, TJC Team Captain Skyler (TJC #11) said: “I think both teams played very well, it was very competitive. However, I think my team managed to hold on. Considering we didn’t actually perform as well last year, and managed to draw with a good team, it’s very commendable.”

The first half started off uneventfully, as both teams started off trying to gain dominance and battled for the ball. However, it soon became clear that TJC were playing a more defensive strategy, while MI were attacking at every available opportunity.

In the 11th minute, TJC keeper Gerome (TJC #17) defended his team’s clean sheet by tipping a rocket of a shot above the bar, to loud applause from his fellow TJC teammates.

A chance for MI soon came four minutes later, when Zahier (MI #3) had a chance to convert a loose ball. However, he blasted his attempt way over the bar, ensuring the score stayed at 0-0.

A more tangible chance for MI came in the 29th minute, when Sanchay (MI #15), took a nicely lined up shot from outside the box. The shot seemed almost sure to go in, but it flew agonisingly over the crossbar, to loud groans from the MI crowd.

Speaking about the missed opportunities, MI Team Captain Louis replied: “I felt frustrated as we had so many chances to score but we just couldn’t add the finishing touch to our attacks. This is something that the team has acknowledged and will rectify in the upcoming games.”

Another chance to take the lead was presented to MI in the 32nd minute, when Riaz (MI #10), was fouled just outside the box. The shot taken by Louis (MI #14) flew to the top of the goal, but TJC’s custodian Gerome made sure of his clean sheet by tipping the effort above the bar.

The second half proved to be just as intense, with Zahier (MI #3) almost scoring consecutively in the 49th minute of the game. However, both his attempts were once again saved by the TJC keeper.

TJC Team Captain Skyler encouraged his team throughout the match, keeping tensions low and pushing his teammates to hold on to the game.

At this point, TJC were holding on strongly to the game, despite various attempts by the MI team to take the lead. They held their defence strongly, and cleared away each ball quickly.

Speaking about his team’s performance, Skyler said: “When we came into the game, we actually didn’t have the mindset of losing. We knew we could do it, and we definitely played it the way we wanted to. We had the perseverance and the drive, and I think we defended very well. All in all, I think it was the teamwork that drove us to do well today.”

With the match coming to a lull towards the last ten minutes of play, it seemed that the match would end goalless. And it did, as the final score stood at 0-0.

Speaking about the opponents, Louis said: “I think TJC deserves all the respect considering that they were well disciplined in defence and kept their defensive shape well. They were a very motivated team and their spirit made them fight for every ball.”

“This game has definitely allowed us to reflect on more important values and characters that are also an important aspect of football such as resilience and team unity… We will definitely work harder and come back stronger in our next few games,” said Louis.