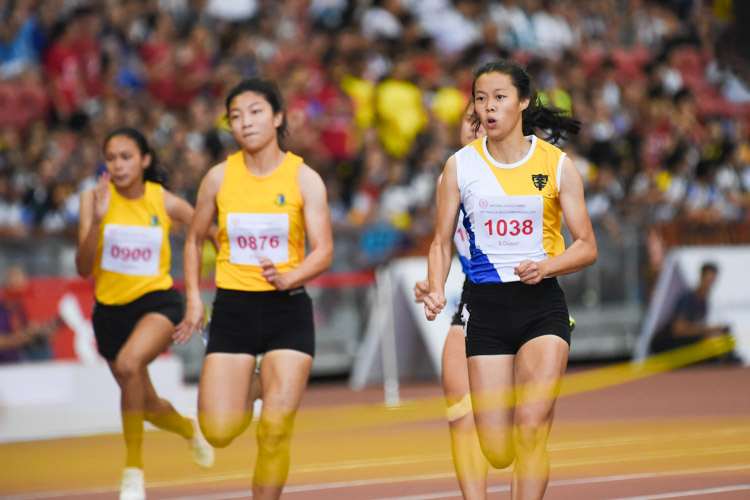 National Stadium, Friday, March 29, 2019 — Amidst the cacophony of cheers from her Nanyang Girls’ High School (NYGH) schoolmates seated adjacent to the finish line, Elizabeth-Ann Tan caught her breath after the B Division girls’ century sprint final and stole a look at the big screen above.

When her name appeared first along with her timing, the beam that streaked across her face told the whole story.

“When I saw 12.25s flash across the results board and hearing the announcement that I broke the record, I was elated,” said the NYGH Secondary Four student. “The amount of joy and excitement I felt was indescribable. I was just so glad that all my hard work had paid off.”

In a matter of two days, Elizabeth-Ann wiped out two championship records under National Stadium floodlights, clinching golds in both the 100-metre hurdles and 100m sprint finals.

She hurdled to a new B Division benchmark of 14.59 seconds on Thursday, March 28, before tearing down the track a day later in the blue riband event in a swift 12.25s.

By stopping the clock at 14.59s, Elizabeth-Ann not only cracked the B Division record of 14.65s set in 2014 by Singapore Sports School (SSP) alumna Nur Izlyn Zaini — who is also the joint national record holder in the event — but also became the second fastest under-17 sprint hurdler in Singapore ever, surpassing Goh Wei Ning, Jannah Wong, Tia Rozario and Kerstin Ong in one fell swoop.

Her timing now only falls behind Izlyn’s archived U17 girls’ record of 14.34s set at a 2014 Youth Olympic Games qualification meet in Thailand.

“I just wanted to do my best for this race (100m hurdles), and I was hoping for a new personal best. So I’m glad that I managed to break the record and set a new PB at the same time,” said Elizabeth-Ann after Thursday’s race.

Having made the switch to the 100m and 200m sprint events last year — and claiming gold in the latter — the C Division 80m hurdles record holder only started hurdling again prior to this season, in a decision made by her family and coaches.

“It’s slightly different, because last year, you know 100 and 200 are almost the same, just that you need more endurance for 200,” explained Elizabeth-Ann, who trains up to five times a week. “But for (hurdles), it’s a totally new experience, like you have to train hurdle technique. So I have to train hurdles on one day and train for 100 on another day, so it wasn’t as easy.”

Her father Raymond Tan, though, admitted that the results might have been even better if not for the tight competition calendar which saw the annual schools meet being pushed forward one month earlier than the usual April period.

“This year (the schools meet) is brought forward by almost a month, and not only that, in between there were a lot of competitions,” explained the older Tan, who took up coaching certification so he could train his own daughter, and has been doing so for the past four months. “So once there is competition, say on the weekend, after the competition you have to rest, you can’t really train.

“So there were actually a lot of (training) days that were lost, so that’s the issue.”

Elizabeth-Ann’s record-breaking week came on the back of her representing Singapore at the 3rd Asian Youth Championships a week earlier, where she clocked 12.59s in the flat 100m.

“It wasn’t the best I ran, but it was definitely a good learning experience running with the top athletes my age in Asia,” said Elizabeth-Ann of her performance in Hong Kong.

And it seemed that the experience was indeed a valuable one, when she took to the century sprint on the final day of the schools championships.

Her 12.25s timing again not only felled the B Division record of 12.37s that her own teammate Bernice Liew had set last year, but was just four-hundredths of a second shy of Shanti Pereira’s 2012 national under-17 mark of 12.21s, rendering Elizabeth-Ann as also the second-speediest all-time 100m sprinter in Singapore for her age-group.

Bernice, who won gold in the 200m this year, settled for the silver this time in 12.43s, amongst a 100m field that was one of the fastest — if not the fastest — in the history of the girls’ B Division.

The final saw the top six finishers all dip under the 13-second barrier, while the respective first, third, fourth, fifth, sixth and seventh placing timings were the quickest in at least 21 years — with Elizabeth-Ann herself holding the record for the best second-place timing in a B girls’ 100m final when she clocked 12.40s last year behind Bernice.

Though a bittersweet moment in getting one better over her teammate this time, Elizabeth-Ann maintained that she was only focused on her own race.

“I am always motivated to clock a good timing in every race, regardless of who my competitors are. My focus has always been on my own performance,” she said. “100m is a very unforgiving race. One cannot afford any mistakes. I made some mistakes last year and lost the gold by 0.03s. It’s that kind of loss you want to beat yourself up for.

“So this year there was an added motivation to want to make up for those mistakes and redeem myself, and I was extremely happy that I managed to execute my race plan really well this time round,” she continued.

“It’s better because you have someone to chase during training, rather than always running alone,” said Elizabeth-Ann. “Like if I train alone, I would only know how to run by myself, but in terms of competition, at least I know I’ve experienced running with someone already.”

Later in the afternoon, Elizabeth-Ann, Bernice and Jade teamed up with Angelina Ng to strike gold again in the 4x100m relay — missing out on the meet record by 0.08s — while Elizabeth-Ann and Bernice joined forces with Elsie Woo and Wu Shu Han for another victory in the 4x400m relay.

With her quadruple gold medal haul, Elizabeth-Ann was quick to pour out her gratitude for her pillars of support over the course of her schools track career.

She said: “I am extremely grateful to my school teachers — Mr James Ong, Ms Cho Wen Jing, Ms Delphine Tan and Mr Lim Chow Hoon — for nurturing us and always putting the students’ interest and well being first before everything else.

“My school coaches — current coaches Mr Melvin Tan and Ms Tan Yew Ling — and former coach Mr Tan Kim Seng, for imparting to us not only athletics skills but also values such as courage, resilience, humility, and graciousness.

“Mr Tan Kim Seng passed away earlier this year and I would like to dedicate my four gold medals to him. He often told me ‘Be fearless, even if your competitors are bigger and stronger’. I hold these words close to my heart in every race.

“Lastly, my parents and siblings, especially Trisha-Ann, for their unconditional love and support.”