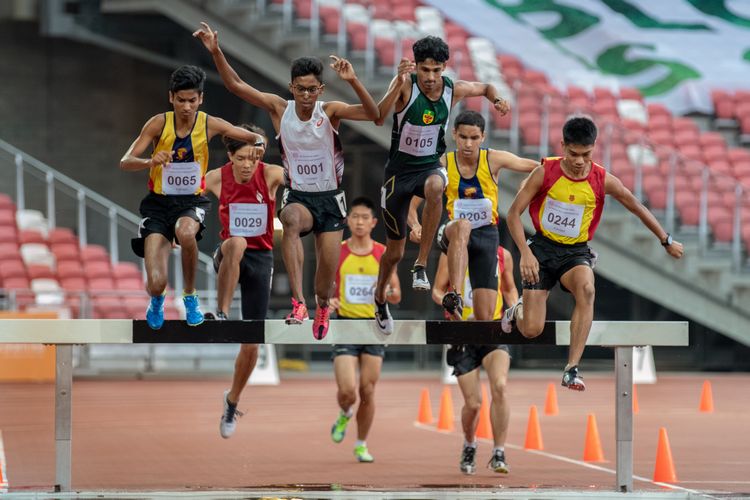 The A Division Boys’ 3000m steeplechase final was re-run on Thursday, March 28 at the National Stadium after a technical mistake during the original run three days earlier at Choa Chu Kang Stadium. (Photo 1 © REDintern Jared Khoo)

While the top runners from Monday’s race — Ruben along with Joshua Rajendran of Hwa Chong Institution (HCI) and Armand Dhilawala Mohan of Raffles Institution (RI) — retained their spot in the top three, their positions were reshuffled as the runners entered Thursday’s race in a different mental and physical state.

In track races longer than one lap, a lap counter is displayed at the finish line. Upon the completion of each lap, the number displayed would be reduced by one. In Monday’s final, the counter displayed the wrong number of remaining laps midway through the race, resulting in the officials ringing the bell — signalling the final lap — a lap too early.

The leading pack of runners, which consisted of Armand, Ruben and Joshua thus began their final surge. HCI’s Joshua was instantly dropped while Armand barely edged out Ruben in a tight sprint finish, before realising there was another lap to go.

“With around four laps to go I decided that I would make a move in the final kilometre, which is about the last two and a half laps. With three laps to go, I was thus preparing to make my move but I noticed something was off as the lap counter showed that there was only two laps remaining,” explained Armand, who is currently a JC2 student at RI.

There are seven and a half laps in the 3000m steeplechase race. Each lap is approximately 400 metres long, depending on the configuration of the water obstacle.

“I didn’t think much about it as Ruben was speeding up so I just focused on the race. It only really set in after I thought I had finished the race and saw that the timing was too quick,” said Armand.

Armand then dropped out of the race completely during the actual final lap, having bypassed one of the barriers out of confusion and hence believing himself disqualified. Ruben and Joshua struggled on to finish the final lap.

“All of us were quite tired, so when we heard the bell we just all went for it. When I finished, I looked at my watch and realised there should have been one more lap. I saw Ruben starting on another lap, so I just followed even though I was quite tired,” said Joshua.

It was eventually decided by the organisers for a re-run to be staged at the National Stadium on the morning of Thursday, March 28, giving the competitors roughly less than 70 hours to recover. However, the damage was already done for Armand.

“On Thursday, I was pretty tired and my mental state was nowhere near as what it was on Monday. I felt really demoralised and didn’t know how to cope with having to run on Monday and having to run again for two days back to back, as I had to prepare for the 1500m final on Friday afternoon as well,” Armand reflected.

The re-run, however, gave ASRJC’s Ruben a chance to defend his title. Last year, he won with a timing of 10:21.53, with Armand finishing a close second.

“I was physically and mentally tired of course, but I did not mind as everyone was on even ground,” said Ruben. “It was a really tough race as Armand and Joshua are really strong competitors. I guess it just happened to be my day especially since I never did any specific training for the steeplechase.”

The re-run started off at a slow pace, the runners visibly tired after Monday night’s nullified final. Armand took the lead from the very beginning of the race, but chose not to push the pace.

Three laps into the race, Joshua took the lead and began pushing the pace, not wanting to be outsprinted by Armand and Ruben like on Monday.

“I made a few mistakes on Monday, so I’m quite grateful for this opportunity to run again, having picked up on what my competitors are doing. I realised I’m not as strong as Armand and Ruben in the final part of the race, so today I tried pulling away mid-race to reduce the chances of a sprint finish with them,” said Joshua.

The move paid off as Armand was quickly dropped — over the next two laps, the leading pack of around seven runners quickly got strung out, with Joshua gaining a small lead of about 10 metres on Armand and Ruben, who in turn were another few metres ahead of the rest of the field.

Ruben, who up till now had been biding his time by trailing Armand, thus moved into action, closing the gap to pull even with Joshua. Meanwhile, Armand dropped further and further back. Now, less the a kilometre remained to determine whether Joshua or Ruben would emerge victorious.

Having disposed of Armand, it was now Joshua’s turn to be dropped. At the beginning of the second last lap — the bell, thankfully, was not sounded wrongly this time — Ruben began to pull away, starting to hurdle over the barriers instead of stepping on them like he had earlier, even hurdling over the water jump during the final lap. He crossed the line with a timing of 10:24.85, the only runner in the field to clock a sub-10:30 timing.

Soon after, Joshua finished in second place in 10:36.91. Nonetheless, the result was an improvement from the “bronze” that he would likely have had to resign to on Monday.

The race ended in bitter disappointment for Armand who, having seemingly “won” on Monday, clinched only a bronze medal during the re-run with a timing of 10:48.21, already out of contention for the win two-thirds into the race.

“This race was not a good one due to my poor mental preparation. I didn’t give it everything I had and the results reflected that,” mused Armand.

“I hope my results would motivate the other CCAs in my school to outdo themselves and give their all in the upcoming National School Games,” said Ruben.