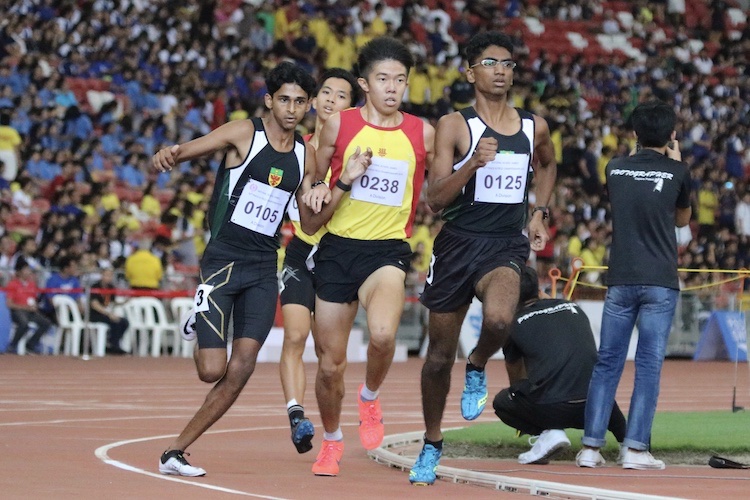 The Boys’ race wowed the crowd with the top three all finishing in under 4 minutes and 11 seconds, proving to be among the fastest since the electronically-timed (ET) record of 4:06.40 was set by Nigel Foo of Anglo-Chinese Junior College (ACJC) in 1995.

The race started out slow, with Selvageethan — or Selva for short — bursting out from the start line only to quickly decelerate, prompting HCI’s Ethan Yan to take over the lead.

“My plan was to stick to whoever was in front, then bank on my finishing sprint to push me through. I started fast and got into a good position for the first 200m. Ethan overtook me then, so I decided to just stay behind him for the time being,” explained Selva.

The two RI runners, knowing their strength lay in their speed as Ethan — who won the A Division Boys’ 5000m final on March 15 — had better endurance, thus bided their time, allowing Ethan to set the pace for the first half of the race.

“I knew Ethan was much fitter than me, so I was really just hoping my speed would help me out,” said Selva, who won the A Division Boys’ 800m on Monday, March 25 with a timing of 1:59.44, three seconds ahead of his closest rival.

“Selva and I planned to hold on for the first 800m and start pushing for the remainder of the race and give it everything we had,” explained Armand.

Ethan thus led the middle two laps of the three-and-three-quarter lap race, with only RI’s Selva and Armand, along with Ethan’s HCI teammate Dave Tung, following.

As planned, with 700m remaining, Selva tried to move to the front but Ethan responded by speeding up, thereby retaining the lead.

“Once we hit the last lap, I overtook Ethan and tried to pull away. When both Ethan and Armand started speeding up as well, I decided to go all out soon, and I did so with 300m to go,” said Selva.

With that, Selva maintained the lead for the remainder of the race, winning with a time of 4:08.97. This beats his personal best of 4:09.38, set at last year’s ASEAN School Games in Kuala Lumpur, Malaysia.

Behind Selva, Dave was instantly dropped by Ethan and Armand, who battled desperately to catch up, with Selva hanging onto his lead marginally.

Entering the final 100m, Selva, Ethan and Armand — in that order — were roughly two meters apart from each other. Selva moved to his final gear and opened the gap further, pulling away for the win, leaving Ethan and Armand to fight for the silver medal.

With around 50 metres to go, Armand put in one last burst to overtake and pull away from Ethan, thus completing a 1-2 victory for RI, with a timing of 4:09.82. Ethan finished right behind with a timing of 4:10.45, unable to move his legs any further when Armand made his final move.

For Armand, the results of the 1500m served as some kind of redemption for his third placing in the 3000m steeplechase held the previous morning; the event was actually held on Monday but had to be re-run owing to a technical error.

“Going into the 1500m I didn’t have any expectations since the field was really strong and I had not raced the 1500m since Secondary 3 (in 2016). I tried to forget about the steeplechase and did my best to prepare mentally and physically for the 1500m. I just kept reminding myself to react quickly and hold on tight to the front pack,” said Armand. Both Armand and Selva are Year 6 students in RI.

On top of his personal achievement, contributing to a 1-2 for his school was also something to be happy about for Armand.

“Selva’s been a really great teammate and friend, so doing this together made the victory a lot sweeter. We both clocked personal bests so we are both really glad with the outcome. It was pretty much the ideal outcome for us. In fact, at many points during the season it seemed so far of reach that I did not want to think about it, for fear of solidifying expectations,” he said.

“The race was intense, but also a fun one with great, great competitors who all performed admirably,” Armand concluded.

In the Girls’ race, however, it was HCI’s time to shine with Vera Wah and Toh Pei Xuan clinching gold and silver respectively in front of a 3000-strong crowd of HCI student supporters.

Vera — who won the 2017 B Division Girls’ 1500m, placed second in last year’s 1500m final in a 1-2-3 victory for HCI, and placed second in this year’s 800m final — was among the favourites coming into the race. Unsurprisingly, she sprang into the lead right from the start, with the pack content in maintaining the status quo. It was a lead she would maintain for the entire race.

Unlike the A Division Boys’ race, there was no close finish, as Vera pulled clear of the pack about 800m into the race. This surge led to the chasing pack dwindling down to Amanda Wong of Victoria Junior College, Sarah Koh of Nanyang Junior College and Vera’s HCI teammates Toh Pei Xuan and Jolene Tan.

“The first two laps of the race felt a little slow for me, so with about 700m of the race left, I decided to speed up. I had to run the second half of the race alone but this was a scenario that my coach (Mr Steven Quek) and I had anticipated and prepared accordingly, mentally and physically,” explained Vera, a Year 6 student in HCI.

By the beginning of the last lap, she had gained a lead of about 30 metres from the pack of four, maintaining her lead all the way to the finish, where she clocked a new personal best of 5:11.59.

Her previous best was 5:11.86, set in 2017 when she won the B Division Girls’ 1500m final in similar fashion — finishing a handful of seconds ahead of her nearest competitor. In a way, her journey in the 1500m had come full circle with this year’s victory.

“I am very happy that the hard work my coach and I had put in over the years paid off. Winning the 1500m again has always been a goal of mine and I am glad that I was able to achieve it in my last year of competing in the National School Games. Being able to stand on the podium with my teammate, Pei Xuan, was a bonus — we worked very hard for this race,” Vera concluded.