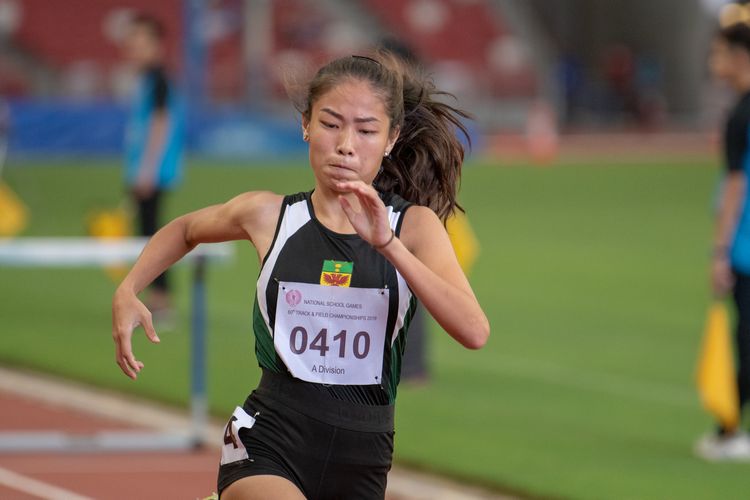 It adds to the B Division gold she won in the event last year and her C Division 80m hurdles win in 2015. Between those, the former Nanyang Girls’ High School (NYGH) athlete still earned silvers losing to teammate and record-setter Elizabeth-Ann Tan in the C girls’ race in 2016, and to Singapore Sports School (SSP) alumna Rachel Chin in the 2017 B Division final.

“I’m very happy (with the result), and it’s quite unexpected because Nationals is held one month earlier,” said Valencia, adding that she would probably have performed better if the schools meet is held in April instead. “But I’ll just come back stronger next year and do a better timing.”

The first-year junior college student’s win comes on the back of a hamstring strain she sustained last December, which forced her out of training for three weeks.

“It was quite hard and depressing,” she shared. “But like, I just came back. I definitely (had doubts), and I was really scared that I couldn’t perform, because everyone was training and I thought I was losing out because there was so little time. I know quite a lot of my fellow athletes also had a lot of injuries because everything is squashed into three months.”

In the final, SSP’s Palada Tang claimed a second silver for herself in 16.33s after earning the same medal in the 400m hurdles, while Natalie Shek of St. Joseph’s Institution (International) clocked 16.82s to finish with the bronze.

The gold is also one better than the silver she claimed in the long jump event with a best leap of 5.32m, placing behind Dunman High School’s Lim En Ning.

Valencia said she is enjoying life in a new school and team environment, after making the switch to Raffles instead of moving up with her former NYGH teammates to perennial title winners Hwa Chong Institution.

“I actually kinda like it, because you get to meet new people, and you train with a new team,” she said, adding that the team mentality in her new school is “more chill” and less pressurising.

“It’s refreshing to not always have that thought of ‘you will win’,” she added with a laugh.

On her future hopes for the hurdles event, Valencia said: “I hope next year I can sub-15s… and qualify for overseas competitions, and from there I will keep setting new goals and pushing myself.”

A day later, she took on the second leg for RI in the 4x100m relay final, where her team finished with the silver behind SSP.