A Div High Jump: Kampton Kam of VJC overcomes back injury to break U20 record with 2.15 metres 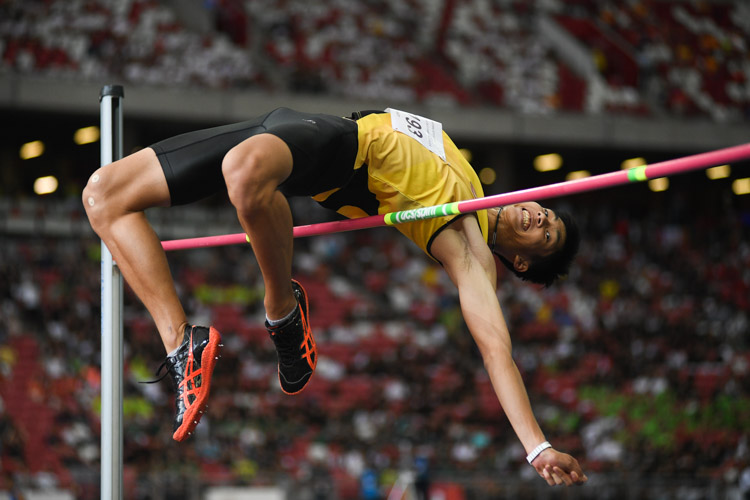 Kampton Kam of VJC smiling as he cleared the 2.15-metre height. He came in first in the A Division Boys’ High Jump event and broke the schools national record and the under-20 record with a final height of 2.15 metres. (Photo 1 © Stefanus Ian/Red Sports)

National Stadium, 2019, March 29 — As Kampton Kam looked at the bar that was set at 2.15 metres, he raised both his hands in the air and began clapping — urging his Victoria Junior College (VJC) supporters, seated behind him, to clap along.

With the crowd clapping with him, Kampton then steadied himself. As he began his run-up, the rhythm of the clapping sped up alongside him almost as if to give an extra lift to the 18-year-old high jumper, who had already failed his first attempt at the record-breaking height.

Kampton smoothly took off, with his eyes fixed firmly on the bar, he arched his body over the bar and as his legs cleanly floated above the bar, you could see his gritted teeth break into a smile of disbelief.

“2.13 (metres) was part of the game plan with me and my coach but 2.15 was definitely out of the question, so I was quite amazed to be able to clear it,” said a delighted Kampton to Red Sports after the competition, who added that his coach actually had advised him against clapping before.

“I don’t really have a very good record with clapping,” said the VJC student, who rewrote his own national under-20 high jump record, previously set at 2.10 metres.

“Last year, I tried clapping at the 2.07m for the championship record but I failed then I got injured, so my coach was like ‘I think clapping is not really for you’,” he added.

What makes this result more special was the fact that he competed with a back injury which he picked up from a bus accident in January this year. He was also limping after his successful 2.15 metres jump, which required him to skip his second jump attempt at 2.18 metres on the advice of his coach, Yu Long Nyu, who has been with him since primary three.

He would eventually bow out at 2.18 metres but not without giving his appreciation to his supporters with a backflip on the high jump cushion.

“I would like to thank everyone who came down to support me, it was really beyond my wildest dreams,” said Kampton, who will now look ahead to his next competition in April, the Asian Athletics Championships in Doha.

The silver medal for the high jump event went to Hansel Loh of Hwa Chong Institution who cleared 1.95 metres while Jonathan Pua of Raffles Institution rounded off the podium with the bronze medal by jumping a final height of 1.93 metres.