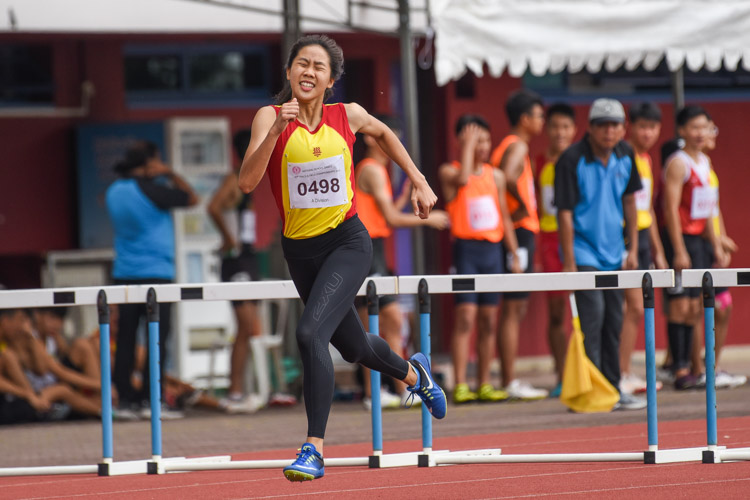 Amanda Ashley Woo of Hwa Chong Institution stopped the clock first in the A Division girls’ 400m hurdles final with a time of 1:05.96. It is her third gold in four years in the event. (Photo 1 © Iman Hashim/Red Sports)

Her timing falls short of the championship record by 0.61 seconds, but sees her enter the sub-66s club in the event. It places her fourth on the all-time list in the championship’s A Division, only behind Singapore Sports School alumna Celeste Goh‘s 2017 heats and final timings of 1:05.49 and 1:05.35 respectively, and Norshidah Bte Mohd Ali’s hand-timed 1:05.8 in 1984.

“I’m just very grateful, because it’s the last individual race I’ll run for National Schools,” said the final-year HCI student, whose gold added to the silver she claimed in the flat 400m two weeks back.

“In a way, it felt like everything boiled down to this one race, because it’s the very last one. And especially for 400m hurdles, it’s an event that I’m very grateful for because it has given me a lot of opportunities to compete in overseas competitions,” she added.

Fatigued by her exertions in the race, Amanda instantly crashed onto the track after dipping past the finish line.

“I saw the clock as I was running in, so I just threw myself over the finishing line,” she recounted. “I was hoping to maybe hit a timing that was a bit closer to the record. But I’m just thankful that it was over, and it was an ending that I would be happy with.”

Amanda still surpassed her previous personal best, a time of 1:05.97 set at the 2018 ASEAN School Games, by a hundredth of a second.

The victory also meant the former Nanyang Girls’ High School athlete has won the event at the annual schools meet thrice out of a possible four, only losing in the 2017 B Division final by 0.02s to CHIJ (Toa Payoh)’s Noor Fatehah Bte Mustaffa.

“I think it was nice to finish it (with the other competitors),” said Amanda. “The nice thing about 400m hurdles is that, almost every year it is the same group of competitors.

“So every single year you see the same faces, and then after that you just cheer each other on, and tell each other to look forward to the end,” she added with a laugh.

Done with her final individual event of the meet, Amanda concluded: “I think generally it wasn’t a very easy season for my team, so I think what was important was the support that we had for each other.

“I also want to praise God, because I think faith is something that helped me get through this season. But mostly I’m grateful for my coaches and my teammates, even my juniors from Nanyang.”