B Div 3000m: RI’s Chai Jiacheng clinches title after bouncing back from defeat 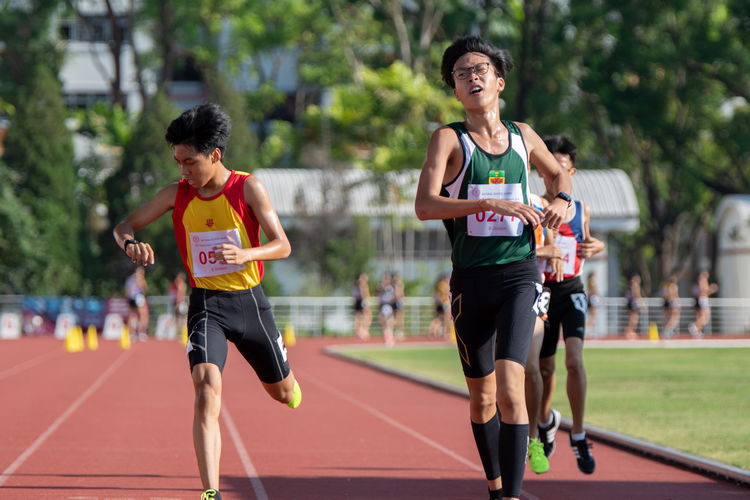 Choa Chu Kang Stadium, Friday, March 15, 2019 — Looking to bounce back from his defeat in the B Division boys’ 1500-metre final, Chai Jiacheng of Raffles Institution was seeking redemption in the 3000m final at the 60th National Schools Track and Field Championships.

He had lost the 1500m gold to Lim Yu Zhe of Nan Hua High School by one second.

When asked what spurred him on during the race, Jiacheng replied: “The thought of the previous race (1500m final) went through my mind, and I told myself I was not going to end this season without at least one gold. So I just went out here today giving it my all, especially in my last lap.”

Jiacheng, as well as Bryan Ong of Bukit Batok Secondary and Lim Wei Feng of Nan Hua High School, took the initial lead in the first few rounds. Despite their lead, the combination of heat and fatigue proved too much for Bryan and Wei Feng, with the duo slowly dropping further back into the pack as the race progressed.

Holding on to his early lead strongly, Jiacheng never faltered once despite fierce competition from the other runners. His eyes were solely focused on the track in front of him, his determination to claim the title showing.

In the last two rounds, Chew Yue Bin of Hwa Chong Institution almost caught up with Jiacheng — and was in close contention for the gold.

In the last lap, Yue Bin attempted to overtake Jiacheng, but his efforts were not enough. Jiacheng, sensing the competition, sprinted in a last burst of energy to cross the line and take the gold. Despite Yue Bin’s best efforts, he had to settle for silver with a timing of 9:44.14.

After the race, Jiacheng was seen visibly limping, grimacing with every step. When asked about it, Jiacheng clarified that he had entered the race with a slight injury.

“I was a little bit unsure about my performance today, as I’ve had this ache in my quadricep for the past week due to the back-to-back races. Despite all that, I told myself to just go out and just win it,” he shared.

Though Jiacheng may not have outmatched his personal best, 9 minutes and 39 seconds achieved in 2018, he was content with his win.

Smiling, Jiacheng quipped: “I’m quite happy getting the gold, although I was aiming for a personal best today. Initially I was thinking about going for the record, but I wasn’t feeling too good in the morning. As such I decided to take it easier at the start, and hopefully win.”

Having ended his last B Division race on a sweet note, Jiacheng is looking forward to next year’s A Division. But first, he will contend for the individual title at the National Schools Cross Country Championships in April.