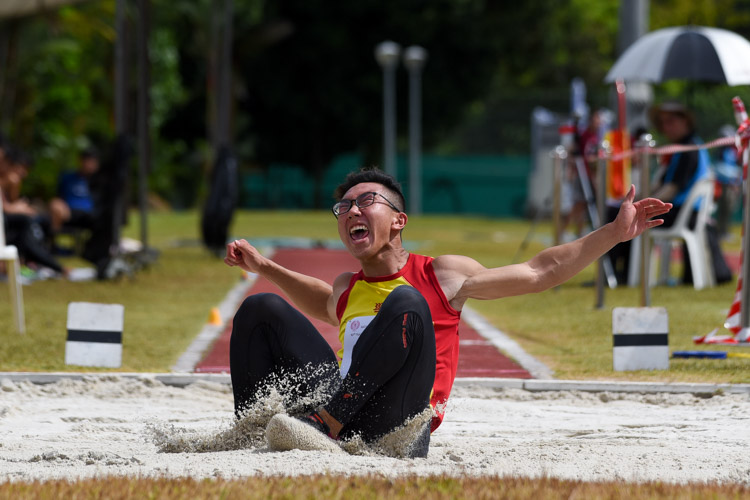 Choa Chu Kang Stadium, Tuesday, March 12, 2019 — Tedd Toh is perhaps fondly remembered for his animated antics, but he was uncharacteristically silent right before his sixth and final attempt in the A Division boys’ long jump competition at the 60th National Schools Track and Field Championship.

Instead of appealing to the crowd to clap to help him get psyched up, his eyes were trained on the sand pit in front of him in the oppressive afternoon heat. The Hwa Chong Institution fifth-year student knew he had one last chance at catching Victoria Junior College’s Kampton Kam, who had recorded 6.81 metres earlier, against a head wind of 1.6 metre/second on his third jump.

“Usually, I would get people clapping before I jump,” Tedd said. “But this time, my coach told me to just focus on what I needed to do.”

The loud roar at the end told the whole story.

Tedd jumped a personal best 6.89m in windless conditions to claim yet another gold in the long jump, adding to his previous victories in the B and C divisions. Kampton was unable to muster a response with his final jump, but the high jump specialist was pleased with his first competitive long jump in six years.

“The silver is a nice surprise actually,” said Kampton, who is a nominee for The Straits Times Young Athlete of the Year award. “Coach told me to just have fun with this event and avoid injury, she said anything would be a bonus.”

Organisers pioneered a new competition format for the jumps this year. Instead of giving only the top six jumpers another three jumps after the first three, the top 16 were accorded six jumps. Each jump event is also completed in a single session this year, compared to the conduct of the preliminary and the final rounds in separate sessions, often on the same day.

Kampton, who is coached by former Singapore national heptathlete Yu Long Nyu, is due to next compete in the high jump on the final day of competition at the Sports Hub. Tedd qualified fastest for the A boys’ 100m final on the same day and is due to also play a part in Hwa Chong’s 4 by 100m relay.

Tedd’s gold on Tuesday was among the six that HCI won on day three of competition, including victories for Jasmin Phua in the A Division girls’ discus and Ashton Tan in the C Division boys’ high jump. Mei Togawa set a new A Division meet record on her way to gold in the girl’s Open pole vault event after she cleared 3.19m, besting the previous record by one centimetre.