National B Div Hockey: Sengkang trumps St. Hilda’s 3-0 in in second round fixture 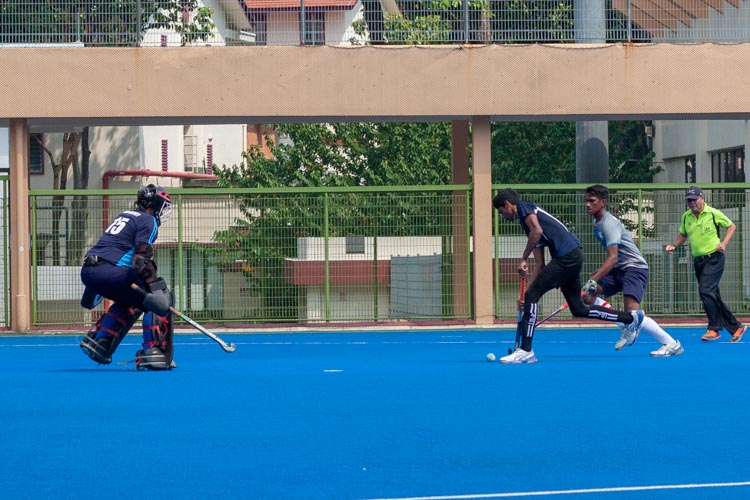 Despite the comfortable victory, SKS captain Supaya Saran Raj (SKS #10) said his team will still be looking to review and improve their performance.

SKS captain Supaya Saran Raj (SKS #10) said after the match: “Although our goal is ultimately to win the title, we focus on embracing the process. While enjoying our win today, we will still go back and watch replays of our performance, identify areas needing improvement and march onward to the next match.”

The match took off at an exhilarating pace, as both sides pressed up the pitch in search of an opener.

SKS had the game’s first real chance as they had a close-range volley saved by the
goalkeeper.

SKS did not have to wait long for another chance as they soon found a breakthrough as Dhinagaran Nair (SKS #2) controlled a penalty corner and swept the ball into the bottom right corner.

Yet, it was SKS who nicked their second goal against the run of play.

Raj finished off a lightning-fast passing move to flick home into the bottom right corner.
And astonishingly, before SHS could even muster a response, SKS had grabbed a third from right under their noses.

Once again, Raj deftly jinked the ball through the opposing defense, before imperiously striking the ball into the bottom right corner of the goal.

Though they seemed shattered, SHS rallied themselves off the ground and spent the rest of the half bearing down on the SKS defense in hopes of pulling a goal back.

Yet, SKS kept their defense as tight as a drum and closed out the half with their 3-0 lead still intact.

Even at this scoreline, SHS refused to believe the game was lost, and they came racing out of the blocks in the second half. They pressured SKS intensely, breathing heavily down their necks whenever SKS had the ball.

This tactic quickly saw a glut of chances fall to SHS, as they proceeded to win three penalty corners in quick succession. Still, they simply could not crack the SKS guard, as an array of last-ditch blocks and tackles were pulled out of the bag to hold off the SHS attackers.

In fact, SKS almost caught SHS on the break with their counter-attacking game, only to be thwarted by a clutch recovery from the SHS backline.

In the nail-biting action, SHS then almost tasted the fruit of their labour, as they managed to slip the ball past the SKS goalkeeper, only for it to be cleared frantically off the line.

SHS could smell blood, and they kept adding fuel to their attacking fire, with attackers tearing down the flanks in search of a path to the opposition goal.

To their credit, SKS defended with a burning fervor, throwing their bodies on the line in a frenzied attempt to stifle and swarm the SHS offensive.

Unexpectedly, it was SKS who earned the last real chance of the match, as Raj drilled the ball goal-wards, but was denied by a sprawling save from the SHS goalkeeper.

SKS came out on top at the end with a 3-0 victory over SHS.

Said SHS’s Hisham Ahmad Putra (SHS #15): “Fighting to come from behind has been characteristic of our team’s victories this season. Unfortunately, this time we lost, yet we still fought through to the end, and I believe this is the fighting spirit that will one day take us to the finals.”