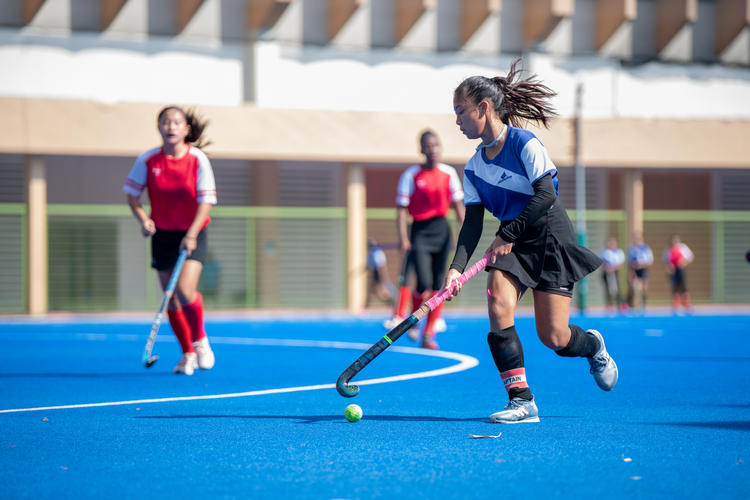 PESEB, Friday, March 1, 2019 — Teck Whye Secondary (TWS) doubled their 2-0 lead against Seng Kang Secondary (SKS) in the second half to secure a clear- cut 4-0 win in the preliminary round of the National B Division Girls’ Hockey Championship, bringing them to second position in their group.

TWS captain Myra Tan (TWS #33) said she did not expect such a big win and that the team has grown stronger after this game.

“It feels an achievement not for me, but for the school as well. This was one of the games in which we didn’t expect such a big scoreline,” said the 16-year-old.

“I felt that we learnt a lot from this game — working together, knowing that even though there may be strong players from the other team, we are strong together,” she added.

In the first half of the match, TWS entered the match with tenacity and fight from the start, showing their prowess with a short corner in just the third minute. However, nothing came out of it as it was blocked out by the SKS keeper.

Vinisha Ammani Prem (SKS #23) blazed down the left flank for her team in an attempt to cross the ball in, but was repeatedly denied by good defending by the TWS defenders.

In the sixth minute of gameplay, TWS took the lead when Narumatha D/O Rajan (TWS #34) took a shot from outside the D that rocketed into the top left of the goal, leaving the SKS keeper rooted to the spot.

A mere minute later, TWS doubled their lead when Siti Ermina (TWS #28) dribbled inside the D to slot the ball past the SKS keeper.

TWS were the stronger team in the first half, stringing together passes and being quick to cover each other. SKS on the other hand, were not pushing hard enough and were easily dominated by TWS’ clean plays.

In the dying minutes of the first half, Nor Fazira (SKS #11) had the opportunity to score the first goal of the match for her team. However, her attempt at goal rolled just shy of the left post.

Both teams were communicating well by the end of the first half, shouting instructions to their teammates, as well as words of encouragement.

In the start of the second half, SKS entered the game a renewed team, determined to take back the game. Their gameplay was faster, and they entered each tackle with more energy and fight.

In the 39th minute, SKS almost had the chance to score — however, their attempt rolled agonisingly across the goal, to frustrated shouts from the SKS players.

Just three minutes later in the 42nd minute, TWS scored the third goal of the game due to a defensive lapse on behalf of the SKS defenders. Confused about who to take on the TWS attacker, this allowed Divya Sharma (TWS #26) to capitalise on a 1v1 with the keeper and slot the ball in the bottom right of the goal.

SKS were presented with multiple goal scoring opportunities, but botched their attempts due to miscommunication between the players. This allowed the TWS defenders to quickly cover and prevent the goals from being scored.

In the 53rd minute, TWS sealed their win with the fourth goal of the match, by team captain Myra Tan Shi Min (TWS #33). Following a set piece from the short corner laid off by teammate Narumatha (TWS #34), the TWS captain launched a rocket of a shot into the top right of the goal, stunning the helpless SKS keeper.

Towards the end of the match, SKS managed to get two short corner, but were slow to lay off the ball and take a shot, allowing the TWS defenders to block the attempts at goal.

With the sound of the whistle, the final score of the game stood at 4-0.

SKS team captain Nurul Unaisah (SKS #7) said her team will be looking to bounce back from the defeat.

“I think we tried our best in trying to score a goal today — we did what coach told us. We tried to get as close to the goal as possible, and managed to get two short corners for the last quarter,” said the 16-year-old student.

“As a team, I think we did very well for our last two games. We have one more game after this, and we’ll try our best to come back from this.”

Praising her team’s showing today, TWS team captain Myra quipped: “I would like to thank my team for making this year such a good one. It’s my last year in the school, and everyone played a very big part of it and I’m very happy about that.”

“I would say that it was a good game today — both teams benefited from the game. We both learnt a lot from the game today and I felt that they gave us a good match to gauge where we are in this competition right now. I hope that they learn from today and work harder for their next match.”

Teck Whye are set to face CHIJ St. Nicholas Girls’ School next for their last match of the preliminary round.