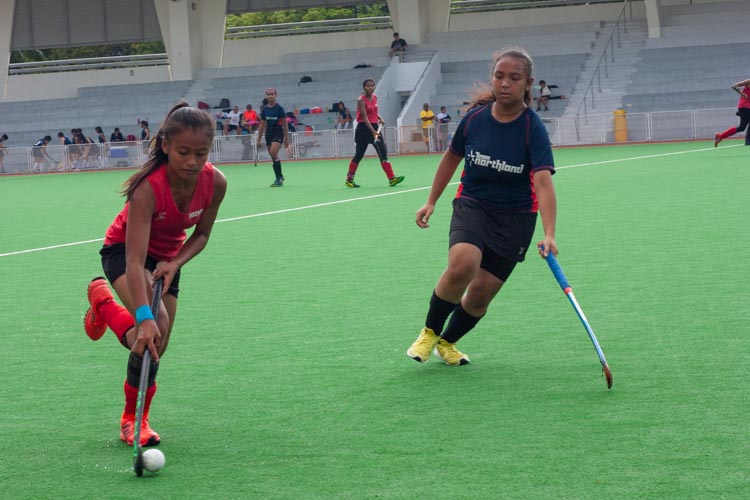 Senkang Hockey Pitch 1, Friday, March 1, 2019 — Marsiling Secondary School (MSS) continued their push for a top-four spot with a solid 7-0 trouncing of Northland Secondary School (NSS) in the preliminary round.

MSS captain Khairatun Nawah (MSS #47) said: “Our attack was in great form today, yet I feel we left holes in our defense which NSS could exploit. Once we solve this issue, we can surely fulfill our goal of reaching the top four, or even better, maybe win the championship!”

MSS came to attack right from the outset, bearing down on the NSS defence and winning successive penalty corners in the process.

And it was from one such corner that MSS opened the scoring, as Khairatun collected the ball and swept a low drilled shot down the middle of the goal.

Sensing an opportunity to double their lead, MSS went hunting down the flanks, trying to work the ball to an attacker in the penalty area.

However, as the pre-game jitters began to settle, NSS grew into the game, and nearly scored from a quick counter-attack, forcing the MSS goalkeeper into an excellent save.

Yet MSS kept pressing up the pitch confidently, and in a matter of minutes they had doubled their lead.

Najibah Hana (MSS #20) struck a deflected slap-shot goalwards, and the ball trickled over the goal-line to add to the MSS tally.

This shocked NSS into a response, and they switched swiftly to a flowing and attacking strategy.

NSS had speed on their side, and they utilised this to launch rapid counter attacks, trying to catch their opponents off guard.

In spite of this, it was once again MSS who struck home next, this time from yet another penalty corner.

Nur Aleya Nabila (MSS #49) controlled a pass before arrowing the ball into the bottom right corner of goal.

Yet, barely seconds after conceding, Nuril Izyani (NSS #18) almost scored after embarking on a mazy dribble from her own half into the penalty area.

To MSS’s relief, however, her shot fizzed just wide of the goal-frame.

Still, it was MSS who would have the last say in the period.

Aleya dragged a swift grounder-shot that deflected off a defenders stick and into the roof of the net.

This closed out the half 4-0 in favour of MSS.

When the match resumed, MSS picked up where they left off, launching an all-out offensive in search of their fifth goal.

And they were soon rewarded, as the ball was squared across the goalmouth, where Teo Geraldine Gripon (MSS #4) was on hand to tap home.

However, NSS simply would not just lay down and accept defeat.

They surged forward in numbers to pile pressure on their opponent’s goal, and managed to draw some last-ditch defending as MSS frantically cleared their lines.

Unfortunately for the NSS warriors, their opponents were out for blood, and were not content to sit back and defend.

Geraldine led the attack for her team, dribbling and feinting deftly past defenders as she took shot after shot on goal.

NSS defended heroically this whole time, putting their bodies on the line to smother their opponents’ attacks or block their shots.

Yet, MSS’s constant barrage of attacks yielded fruit eventually, as both Geraldine (MSS #4) and Sophia Kristina (MSS #10) fired home to seal the game at 7-0.

Although the loss was heavy, NSS could hold their heads high after battling tooth and nail every minute of the match with their skilled opponents.

NSS captain Nurshallynn Bte Hashal (NSS #1) reflected: “I felt our performance improved as the game went on, yet we need to better support our teammates when they are in possession of the ball. Still, we really had a blast playing today, and this has always been our team’s main objective for each game.”