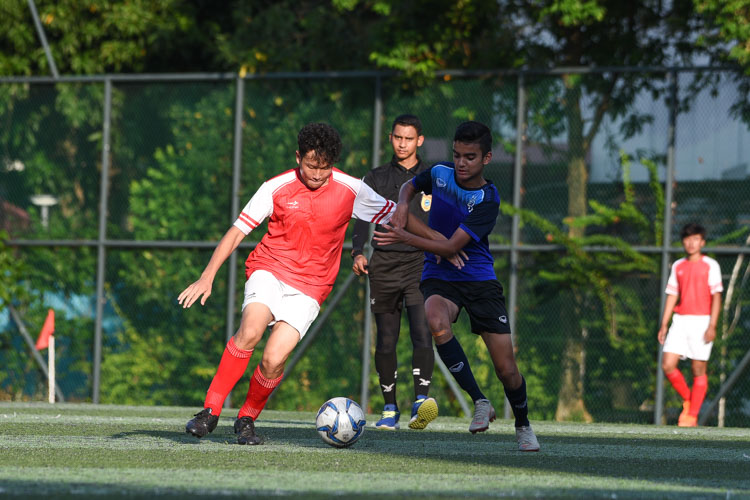 Woodlands Secondary School Field, Monday, February 23, 2019 — Bartley Secondary School (BSS) edged out North Vista Secondary School (NVSS) 5-3 on penalties after a 1-1 draw at the end of full time in the National B Division Boys’ Football League Qualifying Round to seal their spot in the School Premier League (SPL) 1.

The first half of the match started off uneventfully, with both sides fighting for possession of the ball without many clear-cut chances. Both teams struggled in midfield, gaining and losing possession of the ball in mere seconds. Bartley’s tactical intentions soon became clear, as clarified by their teacher-in-charge, Mr. Seah.

He said: “Even though we did not score any goals in the first half, we actually intended to wear down the opponent. However, there were a couple of defensive mistakes that created chances for the other team.”

Chances for each side to take the lead were aplenty in the first half, yet neither of the teams managed to capitalise. Bartley were presented with a free kick in the eighth minute of the match, taken by Muhammad Noor Niqman B Mohd Mohtar (BSS #5) that soared far from goal. Similarly, a free kick given to North Vista in the 18th minute taken by Muhammad Aqil B Mohamad Noor (NVSS #9) fell short of the players in the penalty box.

In the 30th minute, North Vista goalkeeper Fatih Prabaswara Hakim Nurdin (NVSS #1) was called to action, when a shot at the bottom left of the goal forced him to make a diving save to prevent the ball from rolling into the net.

With the sound of the referee’s whistle, the first half ended in an uneventful 0-0.

On his boy’s showing in the first half, North Vista coach Jaswinder said: “We weren’t worried at all that there were no goals in the first half — we were waiting for that chance to happen.”

The second half saw more action as the teams entered rejuvenated from the break, eager to win the game.

The first attempt at goal came in the 46th minute from NVSS, when a free kick by Amirul Zulfaqar Bin Zuhaidi (NVSS #6) whizzed past the left post of the net. In the 50th minute, BSS responded with a curling corner taken by Rewaz Basnet (BSS #10), which was promptly headed away by the NVSS defence.

The first goal of the match came just one minute later, when Namnuhang Rai (BSS #11) headed the ball into the back of the net at close range, leaving the NVSS keeper with no chance at stopping the ball.

Not ready to be defeated just yet, NVSS soon responded in the 63rd minute, when Muhammad Danish Bin Juma’at (NVSS #17) capitalised on a scramble in the penalty box to tap in the ball into the bottom left of the net.

The rest of the game carried on with both teams struggling, each side tired out from the energy they had invested into the first 20 minutes of the second half. At the end of full time, the match was tied in a 1-1 draw.

With no attempts at goal towards the end of the second half, the match was set to go to penalties, as the earlier game between Woodlands Secondary and Sembawang Secondary had seen the latter qualify for League 1, while both North Vista and Bartley were tied on points, goal difference and goals scored.

Having to resort to penalties, Bartley teacher-in-charge Mr. Seah commented: “I think the boys didn’t really perform to their standard and the game plan did not really work. We also did not resolve (the problems) and as such, had to go to penalties.”

When asked about his team’s plan going into the shootout, North Vista coach Jaswinder said: “I told the boys, there is no blame on anybody — whatever we get, is whatever we get. At the end of the day it’s luck, at this point. Whoever is confident should just go ahead and take the penalty.”

The atmosphere was tense on the pitch as the first penalty taker from BSS stepped up to the spot. The only noise that could be heard on the field was the sound of the cars passing by the adjacent road.

Both BSS’ and NVSS’ second penalty takers managed to get their penalties into the back of the net — Asis Hang Rai (BSS #8) firing his penalty into the left of the goal, while Mohammad Tirmidzi Bin Mohammad Sallehin (NVSS #8) calmly tapped the ball into the same corner.

After BSS’s third penalty taker Rewaz Basnet (BSS #10) rolled his penalty into the bottom right of the net, NVSS showed their prowess when Mohamed Zaid Bin Abdul Aziz (NVSS #11) took a fantastic penalty kick, his effort going in the top left of the goal.

With no penalties saved yet, NVSS keeper Fatih Prabaswara Hakim Nurdin (NVSS #1) could be seen anxiously pacing back and forth while his opposing counterpart, Khairul Nizam Bin Rosli (BSS #1) looked equally nervous.

Stepping up to the spot, Muhammad Noor Niqman B Mohd Mohtar (BSS #5) had no trouble converting his penalty, finishing it effortlessly, his penalty going in at the bottom left.

Looking extremely nervous, Amirul Zulfaqar Bin Zuhaidi (NVSS #6) got ready to take his penalty. His effort was aimed at the centre of the goal, having it easily blocked by the BSS keeper.

With the penalties at 4-3, all BSS needed was one more successful penalty to seal the win for them. Shaking off his nerves, Jenit Suhang (BSS #13) fired a low ball into the bottom left of the goal, confirming the win for his team.

With the win, Bartley move on to League 1 with Sembawang, while North Vista will have to settle for League 2, together with Woodlands.

Despite the loss, coach Jaswinder had nothing but praise for his NVSS team, saying: “I think the boys played very well today — it was very unlucky that it had to come down to penalties. However, they were unbeaten the whole year, so to lose on penalties and go to the second league, just unlucky.”