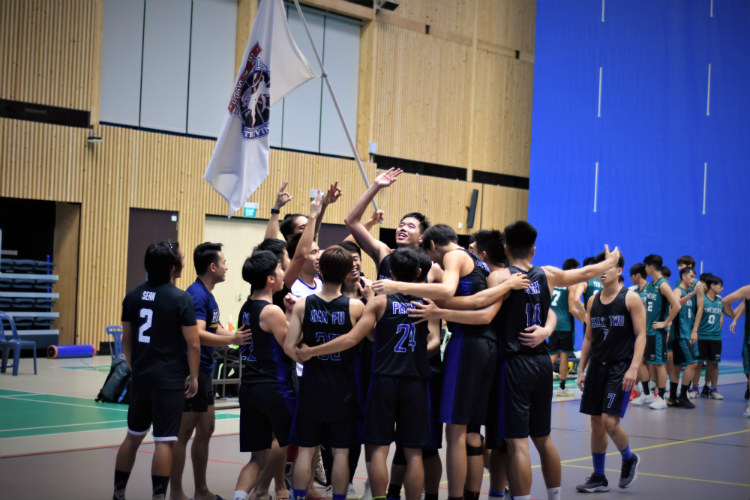 Sports Recreation Centre @ The Wave, Thursday, February 28, 2019 — In a tough and intense contest, Hall 2 proved their mettle and held their composure to emerge victorious 69-62 against Hall 12. This would be their third consecutive Inter-Hall Games Basketball championship to succeed their three-peat campaign.

Wen Han (Hall 2 #34) made his jumper to extend the lead, but it was quickly answered by Rymond Neo (Hall 12 #5) who was fouled beyond the arc and made it a 4-point play, closing the score gap back to the single digit 52-43.

With five minutes left in the quarter, Hall 2 looked to run down the clock but made multiple mistakes in their set plays and rushed shots leading to Hall 12 going on an 11-0 run through transition plays.

With less than 20 seconds on the clock, Hall 12 racked up a series of team fouls to bring Hall 2 to the line. Brian Wong (Hall 2 #11) drew the consecutive fouls and went to the line with 7 seconds on the clock. He secured the crucial free throws and put Hall 2 ahead 67-62, which greatly diminished the comeback from Hall 12.

In their last offence, Hall 12 committed a turnover and Lyon Chia (Hall 2 #14) capitalised with a buzzer-beater fastbreak to round up the 69-62 victory against Hall 12.

On the close game, captain Tay Wee (Hall 12 #6) commented, “We were not as composed, had slow transitions and gave multiple fastbreaks to Hall 2 in the first few quarters. We came in as the underdogs but despite that we gave out best and our 100% to fight hard and I’m proud of the team. Hall 2 trained really hard and they deserved the win.”

Having contributed significantly throughout his Hall 2 IHG career, Rong Hao (Hall 2 #13) was elated with the threepeat. He shared, “We have different players and different dynamics every year, but we managed to adapt to each other. This year we have better players and a deep rotation as we trusted each other.” On his aspirations for the team, Rong Hao (Hall 2 #13) cheekily remarked for a Hall 2 “fourpeat”

With this victory, traditional powerhouse Hall 2 will celebrate their third consecutive IHG basketball championships and look forward to continuing their dominance in the future IHG seasons