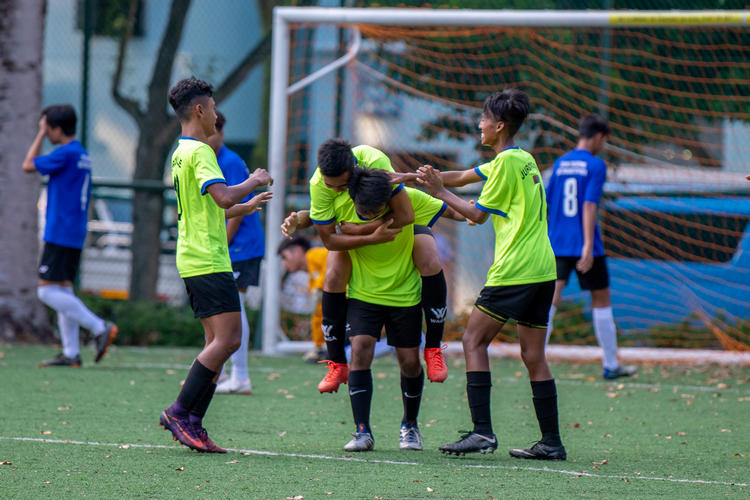 Jurongville Secondary finally broke the deadlock with a single goal in the last 10 minutes, which secured the three points and their current unbeaten record.

Coach Azman of JVSS said after the match that he felt his boys put themselves at a disadvantage as they were unable to control their emotions on the pitch.

“I think some of the boys, they are too anxious, too eager, they are rushing (the play),” said Coach Azman.

“I hope these boys, with the qualities that they have, start to play with some thinking. When they control their emotions the result will come with the quality football they can play,” he added.

The first half of the match started off uneventfully, with both sides fighting for possession of the ball. The strategy of the match soon became clear, as CCKSS adopted a more defensive position, holding all 11 of their players in their own half to prevent JVSS from attacking.

Chances for both sides were few and far in between, as JVSS struggled to find a way around defensively tight CCKSS. The pace of the match was slow, as CCKSS held their formation well, leaving JVSS with little room to move around their half.

JVSS fired a few stray shots close to the goal, but they flew agonisingly over the crossbar, to loud groans from the players on the field. The match went on with little to remember in the first half – CCKSS were content with their defensive formation, while JVSS were frustrated with the lack of scoring opportunities they had.

The first half ended in an uneventful 0-0.

“I think we must be patient, so we were just waiting for the right moment,” commented JVSS Coach Azman.

“They are a very good team, a team full of good individuals, but they have the potential to work together as a team more to score more goals,” commented CCKSS Coach Magen on the JVSS team.

Coming back on the field in the second half, JVSS seemed more determined as they looked to keep their winning streak in the group stages. CCKSS players, however, were calm and collected, playing cleanly and covering each other well.

Just four minutes into the second half, Raihan Shah (JVSS #13) fired an early warning shot at the CCKSS keeper, who made a diving save to maintain the score of the game at 0-0. Another opportunity came for JVSS a minute later, when JVSS captain Nur Fazli (JVSS #4) collected a rebound, but his attempt was fired over the crossbar.

A show of good sportsmanship was also on display during the match in the eighth minute of the second half. Adib (CCKSS #17), went down with a cramp in his leg and was immediately helped by opponent Muhammad Irfaan (JVSS #3). The latter helped to stretch his opponent while waiting for the coach to be allowed on the field. Hobbling off after some help and ice compression, Adib was soon able to return to the game.

The first yellow card of the match was given in the 57th minute of the match, when a bicycle kick by a JVSS player hit CCKSS’ Jin Tao (CCKSS #4) in the side of the face. While slightly shaken, he was soon able to return to play with shouts of encouragement from CCKSS’ coach, Coach Magen.

CCKSS almost went ahead in the 63rd minute of the game, when Febryan (CCKSS #8) was given a freekick outside the box. The lofted ball sailed over the wall and was headed just shy of the goal, whizzing past the right post.

While there were no goals yet after 65 minutes of the second half, both sides seemed to be more confident in their play – JVSS were taking more chances, and shooting towards goal, while CCKSS looked stronger and started to attack as well.

However, the deadlock was soon broken in the 70th minute, when Muhammad Arshad (JVSS #16) capitalised on a scramble inside the box to help his team take the lead. The ball was cooly slotted into the bottom right of the net, to shouts of excitement from his teammates.

JVSS had two more botched attempts at goal, both efforts flying over the crossbar in the 73rd and 78th minute of the game. Despite being 1-0 down so late in the game, CCKSS players did not back down and give up just yet and still looked strong defensively and playing well.

At the sound of the final whistle, the final score for the game stood at 1-0.

“I actually believe in my team — I think we defended well. It was just unfortunate that there was a lapse in concentration that led to the last minute goal. These boys are not DSAs, just here to play football. For them to come out here and play like this, it is very heartening to see”, said CCKSS Coach Magen, commending his team’s showing.