National B Division Football Qualifying Rd: Serangoon Garden come from behind to finish 5-2 against Orchid Park 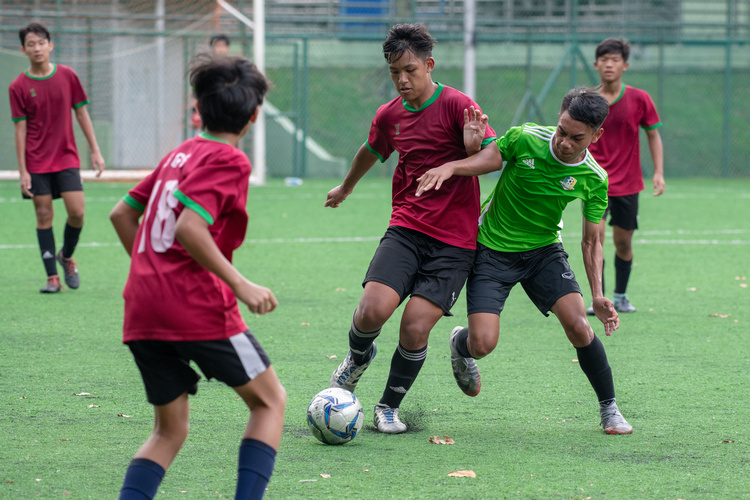 Unity Secondary School Field, 20 February, 2019 — Serangoon Garden Secondary School (SGS) fought back after being 2-1 down halfway through the first half to power through and win the match in a seven-goal thriller. The match ended with a 5-2 win against opponents Orchid Park Secondary School (OPSS) in the National B Division Football Boys League Qualifying Round (Group 20).

Aayush Gurung (SGS #6) and Kunal Gurung (SGS #8) contributed two goals each while Muhammad Sufian (SGS #17) had one goal. For OPSS, Indra (#17) and Brandon (#16) each had a goal during the first half. The early goals by OPSS were clearly pressurising for the boys in red as said by their captain after the match.

“At the start, the game for us was not that good, but we fought back and we did not give up until the final whistle and got the result that we wanted,” said SGS captain Aayush Gurung.

“The match was very intense as we had to make sure that we qualified for the round of 16. We had always done that, so it was always important for us,” he added.

The first half of the match started off extremely fast-paced, with SGS immediately firing an early warning shot at goal in the first minute. By the fifth minute, SGS had established themselves as the more dominant team, with greater possession of the ball.

The first goal of the match came in the 10th minute, when Muhammad Sufian (SGS #17), capitalised on poor defending in the box to poke the ball into the back of the net.

Despite that, the boys in green were still able to create chances. In the 14th minute, Puo Xuen (OPSS #18) demonstrated a good piece of skill to cross the ball into the box. Unfortunately, the ball was quickly cleared by the SGS centre-backs.

OPSS’ first goal came soon after in the 16th minute, when Indra (OPSS #17) tapped in a goal at close range into the bottom right of the net due to a positioning lapse on behalf of the SGS keeper.

Just four minutes later, in the 20th minute, against the run of play, OPSS were awarded a penalty after a foul was committed in the box. Brandon (OPSS #16) stepped up to take the shot, and coolly slotted it into the bottom right of the net.

Not willing to be defeated just yet, SGS responded just four minutes later, when Aayush Gurung (SGS #6), capitalised on a scramble in the box to toe the ball past the goal. This came just after fellow teammate Laken Limbu (SGS #7) lofted a freekick dangerously into the penalty box.

Commenting on the loss of the lead that his team held, OPSS Coach Amin said: “To be honest, we approached the game quite cautiously. When we were 2-1 up I was quietly confident, but the lapse in concentration and focus was what brought them down.”

In the 27th minute of the match, SGS scored their third goal of the match through team captain Aayush Gurung (SGS #6), who headed it past the keeper to up the score to 3-2.

OPSS were presented with a leveller in the 32nd minute, with a free kick taken by Shabirin (OPSS #5), which veered agonisingly to the left of the goal.

SGS almost scored their fifth goal in the 41st minute, when a corner by Sahas Mehbhak Limbu (SGS #5) rebounded off the crossbar.

The second half of the match was less eventful, as the hot afternoon sun soon got to the players. The pace of the match slowed down considerably, as players struggled to keep up in the heat and humidity from an earlier shower of rain.

While both teams battled for possession, neither was able to establish dominance in the second half. Chances were far and few in between as both teams struggled to play around each other’s tighter defence.

In the 48th minute of the second half, OPSS had the opportunity to score from a corner, but the ball was quickly saved by the SGS keeper.

The lull in the match was suddenly shattered in the 66th minute, when Kunal Gurung (SGS #8) scored his second goal of the match. Following a counter-attack, the OPSS defence was slow to fall back, allowing Kunal to easily chip the ball over the OPSS keeper.

In the 78th minute, the OPSS keeper made an amazing save, tipping a rocket of a shot by SGS above the goal, maintaining the current score of the match.

At the sound of the final whistle, the score stood at 5-2.

Despite suffering a heavy loss, OPSS Coach Amin still had good things to say about his team: “Today they fought very well. We were probably too relaxed today as we had not had training in a while from the consecutive games. We will definitely bounce back for sure, we are ready for the next round.”