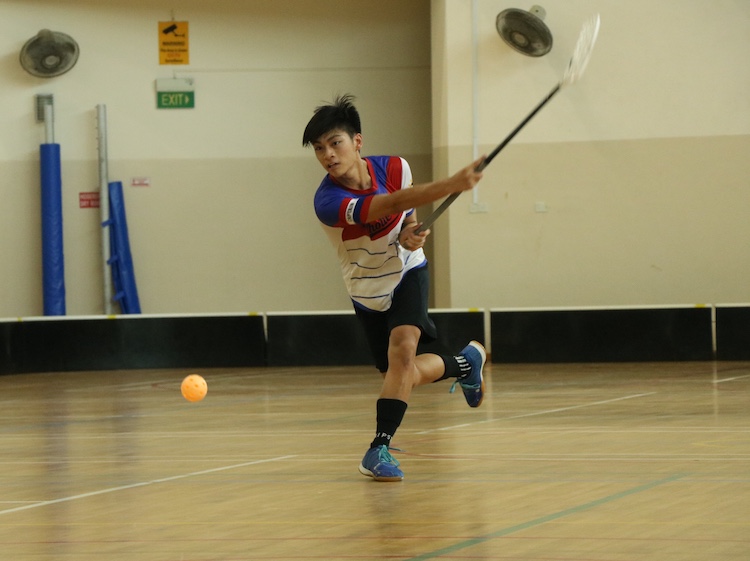 With this win, CHS capped off the group stage with a perfect 5-0 win-loss record, while YHS finished with one of 2-3, resulting in YHS’s exit from the tournament at this stage.

YHS captain Quek Fu Wen (YHS #20) reflected: “Even though we lost, we can be proud that we played with all our heart and soul throughout this season. Also, I truly believe that we have come to cherish one another as teammates, which is the most important factor for us.”

Thus, they took the fight to CHS, resulting in high-speed end-to-end action early on in the game, as both teams surged forward in search of an opener.

After minutes of deadlock, it was CHS who opened the scoring, when Javier Ho (CHS #29) won the ball during a goalmouth scramble, and struck the ball into the bottom right corner of the goal.

CHS then switched to a long-range shooting tactic in an attempt to double their lead, and they landed shot after shot on target, yet the YHS defence stood firm.

However this strategy did pay off eventually, as Harvy Chan (CHS #45) fired a sharp flick shot into the top right corner and put his team 2-0 up.

But YHS refused to be fazed by this, and the team proceeded to tussle hard with CHS in the midfield areas, allowing them to win a lot of turnovers from their opponents.

YHS used these opportunities to attack and test the CHS defence, especially doing so through long range attempts on goal from free hits.

Yet, CHS had the last say in the period, as Jayden Li (CHS #22) pounced on a defensive error, allowing him to tap the ball home and close out the period with CHS 3-0 up.

In the second period, CHS came flying out of the blocks, determined to earn themselves a comfortable lead.

And in spite of strong resistance from the YHS defence, CHS drew blood four times in rapid succession.

This shocked YHS into retaliation, and they launched charge after charge of high-octane attacks on the CHS goal, unleashing a stream of shots that whizzed just shy of the CHS goal.

But CHS made use of this to wear their opponents down, before going on to release a barrage of shots at their target.

YHS keeper Fu Wen did his best to parry many shots, yet he could not prevent Harvy and Ryan Chia (CHS #8) from adding to their side’s tally, rounding off the period at 9-0 in CHS’s favour.

Going into the final period, with the game virtually out of sight, YHS played for their pride and honour, and they fought with all their heart, intensely pressing their opponents back into their own half.

In response, CHS employed a counter-attacking style of play, which worked wonders as they proceeded to find the back of the net three more times, through Elliot (twice) and Jia Hao.

Unfortunately for the warriors of YHS, as fatigue crept in, they were powerless to resist the goal-hungry CHS attackers, who found the back of the net a further six times in the dying minutes of the period.

CHS forward Elliot said: “It took us a while to adapt to the new tactics our coach has given us, yet we applied ourselves to our task and this gave us the win. Above all, our team has truly bonded this season, and I hope this bond only strengthens as we move forward in the competition!”

CHS will next play in the knockout stages, while YHS are now out of the tournament.