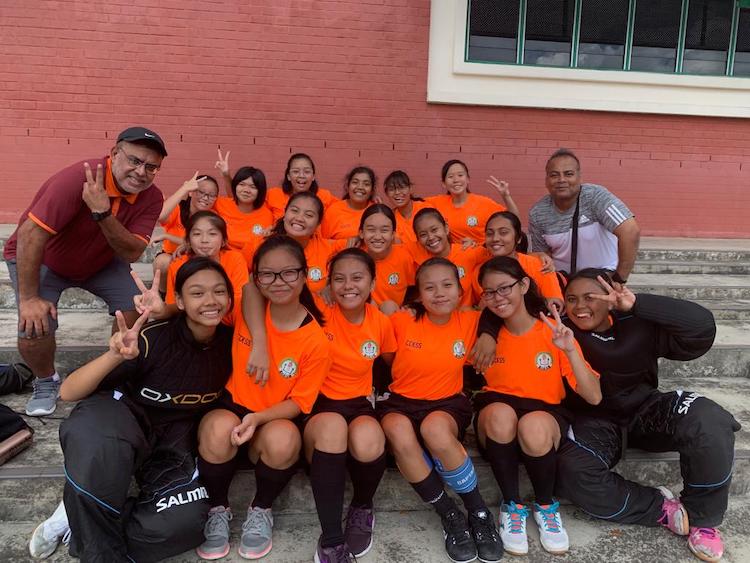 The result saw CCK climb to a 1-4 win-loss record, while CVS dropped to 0-5. Neither team qualified for the knockout stages.

CCK captain Destinie Lau (CCK #15) said that despite being unable to proceed to the next round, she was glad that her team got to end their season with the win.

“We listened to our coach’s advice on clearing the ball and shooting whenever possible, and these were our strengths. Although we could have done better this season, we are truly glad that we could end it off with a blast,” said Lau.

The game started off with CCK as the aggressor, and they pressed their opponents into defending constantly as they pursued a quick opener.

In contrast, CVS chose to build up play calmly as they managed to constantly hit CCK on counter-attacks and getting some shots at their opponent’s goal.

Yet, against the run of play, it was CCK who took an early lead.

Ong Jia Le (CCK #7) did brilliantly to slam a low shot from the halfway line on target, where it deflected off the goalkeeper and into the net.

This sudden setback instilled a new sense of urgency in the CVS players as they switched to an attack-minded, one-player back formation.

CVS received further help when CCK had a player temporarily sent off for an illegal action carried out on the substitute’s bench.

Buoyed by their one-player advantage, CVS proceeded to rain shots at the CCK goal, with most attempts coming from long-range or the flanks.

However, CCK defended vigorously and bravely held fort in the face of the CVS onslaught, allowing them to close out the period while still holding a 1-0 lead.

Unfortunately for CCK, they continued the second period while still being one man down, as they carried out a substitution at an incorrect side of the court.

CVS once again pushed relentlessly to make use of their advantage, yet they were still faced with fierce resistance from the gutsy CCK defenders.

Then, when CCK’s 5th player was restored, they reverted to their regular all-out attacking strategy and was nearly rewarded with a shot that trickled centimeters shy of the goal.

However, in a surprising turn of events, CVS had a player sent off, and without delay, CCK fully capitalised on their advantage.

Nur Syazwani Bte Rosli (CCK #10) doubled her team’s lead with a sharp, grounded slapshot into the bottom left corner of the goal.

CVS, realising the gravity of the situation, retaliated with true grit and determination.

They surged forward in a full-on offensive, unleashing a barrage of shots at their target and giving the CCK defenders a real headache to deal with.

Unfortunately for CVS, either their attempts just whizzed past the goal frame, or a CCK defender was on hand to block them, and the 2-0 scoreline managed to survive the period.

In the final period, it was do or die for CVS, and they threw everything they had at their opponents in an attempt to salvage the game.

To their credit, CCK showed no sign of complacency and matched their opponent’s intensity in attack with a spirited and unwavering defence.

CVS piled enormous pressure on the CCK goal, with Asyiqin and Gwyneth Yeo (CVS #25) coming dangerously close to finding the back of the net.

Yet, as CVS began to tire, CCK once again pounced on their chance. Amelia Ow (CCK #13) managed to shrewdly rob a defender of the ball before slotting home and handing her team a comfortable 3-0 lead.

Though this was a tough pill to swallow, CVS showed immense heart and pride to fight for a consolation goal.

Alas the story of the match prevailed, and although CVS dominated the final exchanges of the game, the match rounded off at 3-0 in favour of CCK.

After the match, Nurul Asyiqin Bte Juraimi (CVS #11) said she remained proud of her team’s efforts.

“I am proud that we fought our utmost hardest in this match,” said the CVS captain.

“Yet I believe that this season taught us we need to improve our in-game communication and our floorball foundations.”