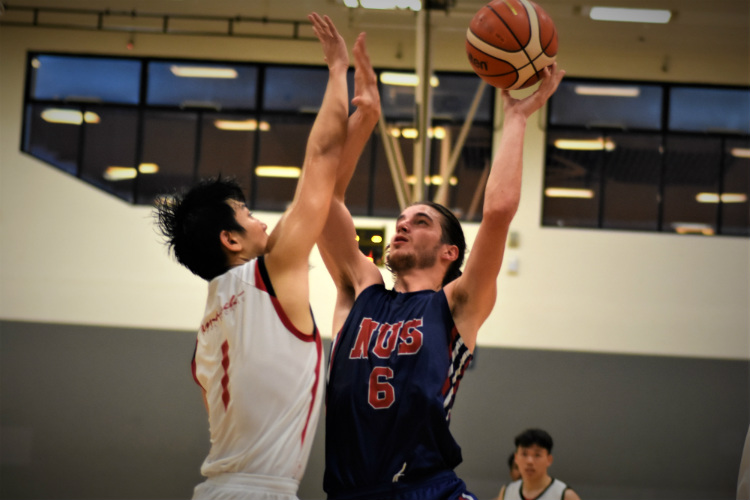 It was an intense start to the game as both teams adopted man to man defence against each other. Amidst the tight defence, both teams executed their set plays with dribble hand offs as well as pick and rolls to create plays. NUS started off with Rolu (NUS #3) driving in from a good screen and kicking out the ball to Raymond Loo (NUS #10) who converted the 3-point shot.

This was answered with Terry Peter (TP #9) scoring the under-basket through a timely inbound pass coming from the baseline. Both teams were scoring at similar tempo but halfway through the quarter, NUS had a slight lead coming off from their better-organized defence. However, that lead was subsequently narrowed down in the late minutes of the quarter as TP’s offence found its tempo through quick transition plays.

These transitions were led by Captain Ji Keong (TP #77) who drove through the NUS defence and was followed up by a 3 pointer by Zhai Siming (TP #1) in their subsequent attack. Despite this, NUS managed to secure their narrow 1 point lead of 17-16 at the end of the quarter via Arno Ricou (NUS #6), whom leveraged on his domineering height and muscled his way in with solid post moves.

The second quarter saw a more aggressive TP offence as they forced their way into the NUS defence with numerous drives towards the basket. This led to NUS suffering from foul trouble. An unsportsmanlike foul by NUS onto Sherman Seet (TP #11) after his steal passed the lead over to TP as he converted both free throws and scored a jumper from the continued possession.

This lead was short lived as NUS soon tied it with Arno Ricou (NUS #6) exerting his height advantage in the paint scoring back to back baskets. Despite conceding several points through free throws with their foul trouble, NUS managed to secure a narrow 1-point lead again with a 3-point shot by Raymond Loo (NUS #10), ending the quarter 40-39.

The same affair would be repeated in the third quarter as both teams took turns at the lead. Both teams got into foul troubles early just merely 4 minutes into the quarter and were mostly earning their points at the free throw line. At the end of the quarter, NUS managed to extend their lead to 2-points with the scoreline at 61-59.

NUS will further extend their lead in the final quarter backed by strong defensive intensity and capitalizing on the offensive opportunities. According to NUS Captain Lim Dao Han (NUS #24), the change to zonal defence at the last quarter was the main attribute to their victory. He shares, “They (TP) were getting a lot of foul calls and free throws, hence our coach got us to switch to the 2-3 zonal defence which prevented their drives and minimized our fouls.”

NUS’s defensive strategy did manage to keep the TP offence at bay, as they fell behind as the quarter progressed. TP’s offence was centered around shooting outside the arc due to NUS’s tight zonal defence which left minimal space. It was a good attempt as Jordan Lee (TP #23) clinched 3 consecutive 3-point shots although they still fell short. This was mainly due to their lack of an answer to Arno Ricou (NUS #6), who managed to clinch 14 out of the 28 points NUS had in this quarter. With the stronger defence that transited to more offensive opportunities, NUS clinched the victory 89-79 against TP.

On the close match TP had, Captain Chaw Ji Keong (TP #77)remarked, “I think we did well, sadly we couldn’t close the game. We lacked focus at the last part and did not have enough stamina to keep up.”

When congratulated on advancing to the IVP finals, Captain Lim Dao Han (NUS #24) commented, “Advancing to the finals was our goal coming into IVP. We focused one game at a time and played against worthy opponents on our way. We earned every single game, and it is due to the same mindset that all of us have in wanting to achieve.”

NUS advances to the IVP finals with their victory, whereas TP proceeds to the 3rd/4th placing match. Both matches will be played on Wednesday, 30 January, at SUTD.