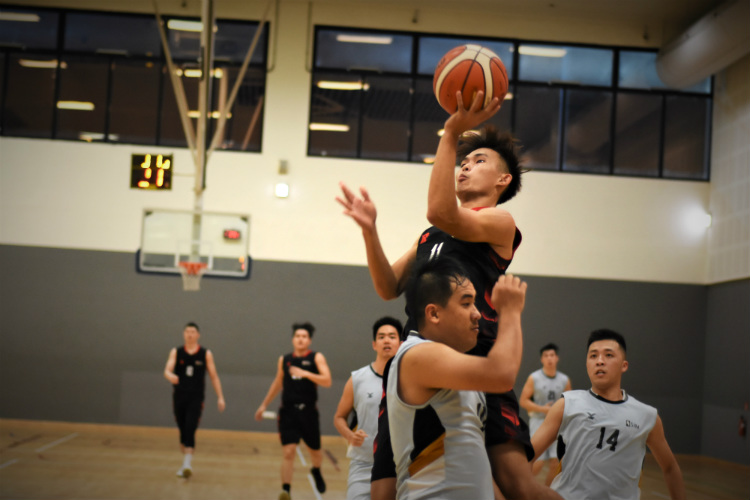 SUTD Sports Hall 1, Monday, January 29, 2019 — Nanyang Technological University (NTU) advances to the Institute-Varsity-Polytechnic (IVP) finals with a steady game performance to secure their spot with a 74-57 victory against Singapore Institute of Management (SIM).

The scoreline remained even in the first quarter as both teams answered each other with baskets coming off smooth set plays and many shots coming off pick and rolls. A notable play by Gary Yeo (SIM #14) saw him a chance at a 4-point play after being fouled on his 3-point shot, however he failed to convert the free-throw. That did not deter him as he continued to score in SIM’s next possession, netting him 7 points out of SIM’s 13 points in the quarter. NTU managed to hold a slight lead of 16-13 to end the quarter.

NTU managed to pull the lead apart in the second quarter with better offensive tempo. Liau Ming Shun (NTU #11) contributed to this with his and-one play and a jumper in the subsequent possession. Ming Shun (NTU #11) stayed hot to score a game-high 18 points. NTU also had a field goal percentage over SIM who were not making as many of their shot attempts. This was due to a tight NTU defence that denied SIM of their drives and contested their shot attempts. NTU extended their lead to 34-26 to round up the quarter.

The third quarter saw the scoreline retaining a similar gap as SIM capitalized on NTU’s foul trouble. This was despite NTU having a 42-30 lead earlier in the quarter off their swing offense which created space for Sim Jia Hao (NTU #4) who made 3-point shots and Ming Shun (NTU #11) who drove into the paint area for baskets. In addition to foul trouble, NTU also committed turnovers with inbound passes from the baseline, allowing SIM to capitalize and maintain the scoreline for a comeback opportunity in the last quarter. The third quarter ended 49-42 with NTU having a slight advantage.

Both teams were evenly matched up in the early minutes of the last quarter. However, NTU picked up their rhythm eventually and went on a 10-4 run before SIM called for a timeout. This rhythm continued after the timeout as NTU’s robust defence managed to keep the SIM offence at bay and allowed them to transit into several fast break plays. The score gap would be blown apart and NTU secured a comfortable victory of 74-57.

On main winning factors, Captain Darryl Lee (NTU #30) attributed their win to the defence. He explains, “We played as a team, played great defence to stop their offence and transited to fastbreak plays.” He hopes the team will continue doing what they are supposed to do, starting with defence.

Reflecting on the game, Captain Hiew Zi Jie (SIM #10) shares, “It was a great game, we did our best and fought for every ball. We were not as prepared, perhaps, NTU were better prepared. They had better shots and rebounds.”

NTU advances to the IVP finals to play against NUS with their victory, whereas SIM proceeds to the 3rd/4th placing match against TP. Both matches will be played on Wednesday, 30 January, at SUTD.