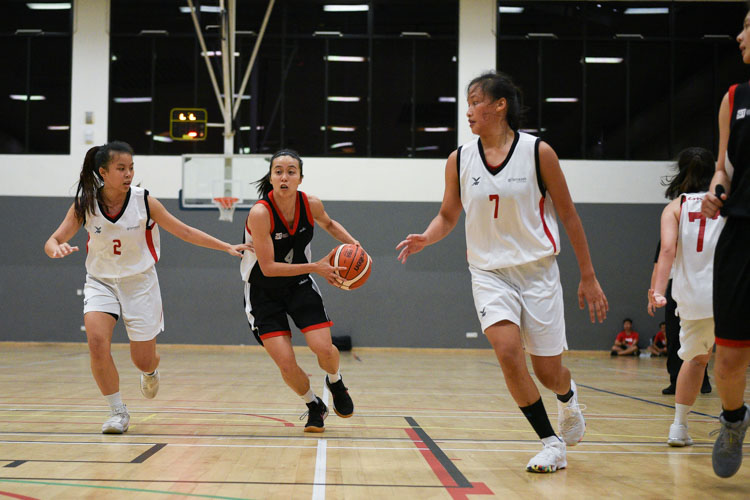 SUTD Sports Hall 2, Monday, January 28, 2019 — Trailing for most of the game, Singapore Institute of Technology (SIT) rallied back in the final seconds to earn their spot in the Institute-Varsity-Polytechnic (IVP) Basketball Championship final by a margin of two points, beating Temasek Polytechnic (TP) 55-53.

In the first quarter, TP took the lead as SIT struggled to gain momentum. SIT soon found their rhythm and clawed their way back, closing the gap to tie the score at 10-10. However, a free throw and a three-pointer got TP back in the lead to finish the quarter 14-10.

This would prove to be a trend for most of the game as TP continued to maintain a slight edge over SIT — whenever the latter caught up, TP would quickly respond with a few more points.

However, SIT prevailed in the end as TP’s streak ran out in the fourth quarter.

“I think our coach really gave us a lot of self-confidence, and all our teammates encouraged each other on and off the court. We had a lot of trust and confidence in each other. For instance, if someone cut in we’d let her have the entire space to herself, or if the ball is passed out the players outside have the confidence to shoot,” said SIT’s Cheryl Ong (#10).

The intensity would only increase further in the third quarter as Cheryl (SIT #10) scored a three-pointer merely a few seconds after the game resumed, bringing the match to 28-26. TP’s lead, which seemed commanding just minutes ago, now appeared to be under threat.

The rest of the third quarter played out like déjà vu. TP responded strongly to the challenge with TP’s Joanne Lim (#2) and Carissa Chan (#7) scoring two points each to bring the game to 32-26. TP’s lead was extended further when Monica Lim (#77) scored three points — to much fanfare from the crowd — to bring the score to 35-26. A few more possessions later, the score was set at 39-29.

However, a three-pointer was scored by Cheryl Ong (SIT #10) after receiving the ball from Sara Choong (SIT #4), who dribbled the ball across the entire court to catch TP by surprise. Not to be outdone, TP’s Syirin Hashim (#9) answered back with a three-pointer for her team to bring the score to 42-32.

But as the third quarter came to a close, SIT continued to chip away at TP’s lead. Cheryl (SIT #10) in particular scored two crucial free throws in the last 10 seconds of the quarter to narrow the gap to just two points.

Entering the final quarter, the stakes were certainly high. SIT’s cohesion had paid off by now as their seamless teamwork brought them closer to TP point by point, while TP’s players, perhaps under pressure, missed a few free throws.

However, TP’s Monica (#77) made up for it with a spectacular three-point shot in one of their possessions — the ball leaving her hand a split second before the shot clock ended.

With three minutes of play remaining, two points scored by Sara (SIT #4) brought her team in the lead with the scoreline at 51-52. This was not to last, however, as TP’s Joanne scored another two points to regain the lead with 53-52.

The metaphor of the “last-minute” victory proved literal here as SIT’s Su Rui (#5) scored two points from the charity stripe to bring SIT back into the lead at 54-53, with roughly 45 seconds of the game remaining.

A timeout was then called with 13 seconds of play remaining. Anxiety was running high in the Sports Hall as TP needed just two more points to win or one point to bring the game into overtime.

Two missed free throws from TP and a successful one from SIT later, the game ended with a score of 55-53 in SIT’s favour.

“We were nervous at the start of the last quarter, but we stayed calm and just tried to play our best. I’m really proud of my team as we worked really hard, and we did not give up even in the final seconds of the game. We’re looking forward to the game against NTU,” said SIT’s Cheryl (#10).

In the other semi final, Nanyang Technological University (NTU) raced to an early lead against Singapore Polytechnic (SP) in the first quarter and never looked back as they defeated SP 63-44. The 2018 women’s IVP finalists dominated SP with their taller physique and had a commanding double digit lead of 23-11 after the first half.

They then comfortably closed out the game and stayed on course to reclaim their title which they lost to SIM last year. SIT will face NTU in the final on Wednesday, January 30, at SUTD.

More photos of both women’s semi-finals next page