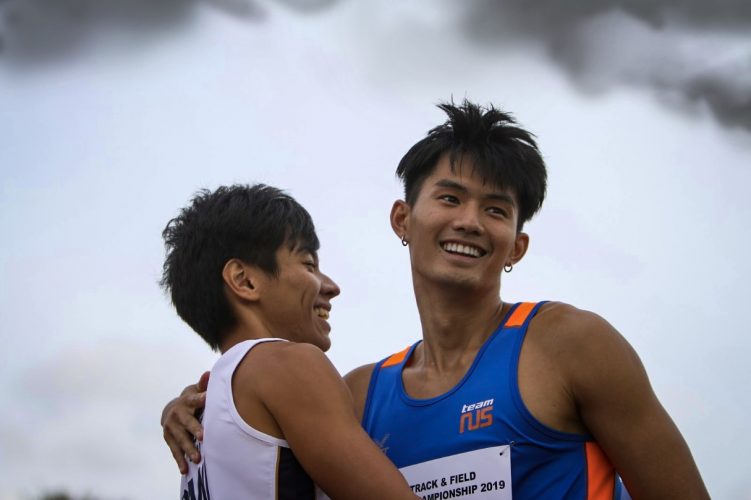 Kallang Practice Track, Saturday, January 19, 2019 — Timothee Yap and Tan Zong Yang have been teammates since their junior college days in 2011 and 2012, back when they represented Hwa Chong Institution.

But while Timothee was dabbling in the hurdles events back then, the 2016 Rio Olympian is now a fully-fledged sprinter sparring day in, day out with training mate Zong Yang, who now specialises in the 400 metres.

The pair, both final-year law undergraduates at the National University of Singapore (NUS) and Singapore Management University (SMU) respectively, are currently training together under the tutelage of Luis Cunha.

And the results look promising, as both sprinted to a tight 1-2 finish in the 200m final at the Institute-Varsity-Polytechnic (IVP) Track and Field Championships, with Timothee edging Zong Yang by 0.04 seconds.

Said Timothee, who was nursing a niggling injury prior to the race: “Actually I just wanted to help Zong Yang to qualify for the World Uni Games. So I didn’t intend to… I just wanted to play it safe and not finish the race.”

“But then I came out of the curve quite ahead, then I decided to just finish the race,” he continued, laughing.

Zong Yang is now 0.07s away from qualifying for the World University Games (WUG), which is to be held in Naples, Italy, this July.

However, Zong Yang — who improved on his 200m personal best by 0.21s — still has his eye on the 400m event, which he said he will attempt again at the Singapore Athletics Series 2 meet and subsequently.

Earlier in the women’s 200m final, Clara Goh of Temasek Polytechnic (TP) claimed her first ever IVP gold with a time of 26.09s, bettering her previous best of 26.27s set when she won bronze at last year’s edition.

“I felt that it was my best performance this season and I was really happy that I managed to beat my PB,” said Clara, whose only other individual gold medal at an inter-school meet came in the same event at the 2017 POL-ITE Championships.

“I wasn’t thinking much about the winning, more of running a PB.”

Clara finished a good 1.36 seconds ahead of her nearest competitor in the final, as Rebecca Tay of Nanyang Polytechnic (NYP) and Darshini Kuppusamy of Ngee Ann Polytechnic (NP) finished in 27.47s and 27.92s respectively to complete the podium.

Clara, who clinched silver in the 100m last week with a new personal best as well, attributes her improvement to her two coaches.

She said: “Currently I’m training under two coaches. During TP relay training, coach Hamkah (Afik) has been a great trainer. But the bulk of my development was under coach Margaret (Oh) — her patient and careful guidance plus her constant pushing during my training has most probably been the reason for my rapid improvement.”

Later in the afternoon, she ran the third and second leg for TP in the 4x100m and 4x400m relay finals respectively, clinching another gold and silver alongside teammates Alanis Moey, Haanee Hamkah and Andreana Tang for the former and Tor Jia Wen, Alanis and Andreana in the latter.

In the day’s opening events, Celeste Goh of NUS and Calvin Quek of Nanyang Technological University (NTU) conquered the 400m hurdles in dominating fashion, finishing in 1:08.27 and 56.52s in the women’s and men’s timed finals respectively.

Celeste, who was also champion in the flat 400m, stopped the clock more than six seconds ahead of her nearest rivals, NP’s Joanna Seet and NUS teammate Kathleen Lin, while Calvin was at least three seconds faster than the other podium finishers, TP’s Hafizul Hakim and NYP’s Isaac Toh.

However, both finals were marred by a technical mishap as race officials had allegedly placed the eighth hurdle in each lane on the wrong mark.