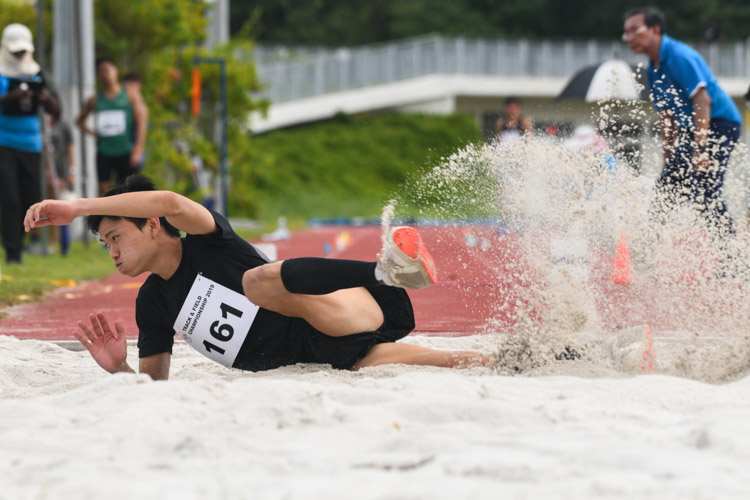 Joseph, who recorded only two jumps — 13.91m and 14.11m, ignited the competitive streak in Zhe Ying.

“Actually, coming to this competition I wasn’t very well prepared because it was after the holidays and all that,” said Zhe Ying.

“He was actually in front of me, so I was like, I just had to beat him.”

His winning jump ensured a 1-2 finish for NUS and continued the friendly rivalry between Zhe Ying and Joseph, who were roommates in Myanmar where they competed in the ASEAN University Games. In that competition in December, Joseph had beaten Zhe Ying with a jump of 14.22m.

Arfan bin Azhar of Republic Polytechnic wrapped up the top three with a jump of 13.84m as he adds another bronze to his collection. He also came in third during the POL-ITE triple jump event in November 2018.

Last year’s POL-ITE champion Shawn Jong was edged out of the podium as he came in fifth with a final distance of 13.32m, which was some distance off his previous winning jump of 13.94m.

Zhe Ying said this would probably be his last competitive IVP as he would be focusing on school after the competition. He did not rule out a return in his final year of schooling but he said he “wouldn’t be at this level”.

“I would like to thank my coach, coach Gabriel Lim for putting in so much effort since secondary two, JC, army — all the results I achieved are due to him — and my teammates, and also Joseph.”

“I think without him to compete against me, I probably wouldn’t have done so well.”