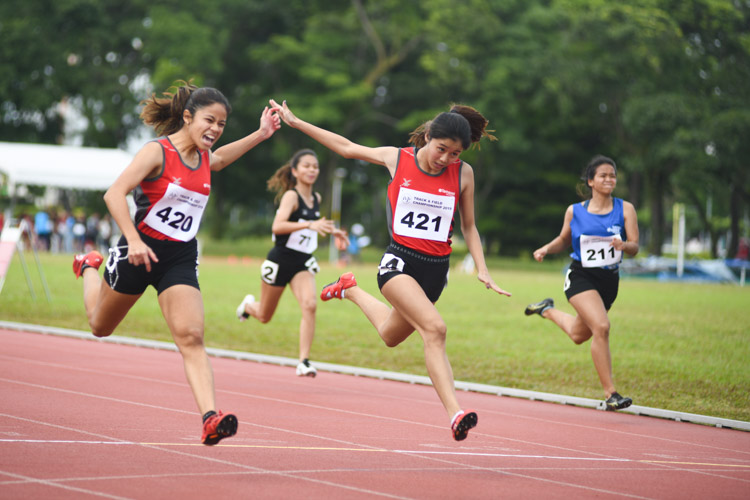 This time round, it was down to a mere 0.09s as the Temasek Polytechnic (TP) sprint duo went head-to-head again in the 100-metre final of the Institute-Varsity-Polytechnic (IVP) Track and Field Championships, finishing one-two.

Surely, the regular sparring during school training has borne fruit as both girls achieved personal bests — Haanee’s 12.66s bettered her POL-ITE winning time of 12.73s, while Clara twice rewrote her previous mark of 12.86s in the heats (12.79s) and final (12.75s) of this IVP meet.

“Honestly we’ve always been finishing very close, even during training,” said Haanee. “But I think because of that, she motivates me to push even further. So that’s why she’s a very good training partner for me.”

Just like their race finishes, the teammates are equally tight off the track.

Clara quipped: “Like what my coach said, on the track we must focus on our race like we are rivals, but then after that we are like sisters, we are friends.”

The pair are coached during school training by Haanee’s father and former national sprinter, Hamkah Afik, who is also the current national relay coach.

Haanee acknowledged the impact her father has had on her training and performance.

“I think he has really played a huge part in (my improvement),” said the former Cedar Girls’ Secondary athlete. “And because of the effective training, I’ve been improving quite a lot recently. Also in poly, it is a different environment from secondary school so I think that the new environment has really helped me to push further and have more discipline.”

In the men’s century sprint final, Nanyang Technological University (NTU)’s Khairyll Amri rose to the occasion as he came out tops in a strong field of competitors.

This is the first time in at least 12 years that the top four of the IVP men’s 100m final have all dipped below the 11-second barrier, and with all eight finalists finishing under 11.3s.

“This year it was actually very interesting in a sense,” said Khairyll, giving a nod to the high quality competition he faced. “I had to really be mentally prepared. So in the past two days I was just focusing a bit more, not on the competition, but what I had to do during the race.

“I train with some of them and I know that they are actually doing very well in training. The poly students are getting faster and faster, which is surprisingly amazing.

“I can see the progression — there’s more of development, rather than just focusing on results itself.”

Joshua had edged Dexter to the POL-ITE 100m gold two months ago by the tiniest of margins — to be exact, just three-thousandths of a second in a 10.93s photo finish. This time round, the 0.01s difference between the pair was not any much bigger.

“We push each other on and off the track and I’m really happy for him on his improvements,” said Joshua, formerly of Raffles Institution and holder of the National Schools B Division boys’ 100m record. “He works very hard and deserves everything he’s achieved.

“We have a very good relationship off the track and I hope we will continue to lower our timings for the rest of the season together.”

Dexter, though, did get one better over Joshua in the 4x100m relay, where TP triumphed in 43.25s.

Joshua had crossed the finish line second in the relay, but his NYP team was eventually disqualified for a botched baton handover in the first exchange zone.

That helped the National University of Singapore (NUS) quartet to silver, while SMU took bronze.

TP’s relay team was boosted by the return of national sprinter Hariz Darajit, who had a year-long injury layoff after suffering a complete tear to his right anterior cruciate ligament (ACL).

“We felt like we had a chance but of course knew it was going to be a tough competition,” said Hariz, whose other relay teammates were Dexter, Hafizul Hakim and Yusuf Arsyad. “We just gave our best and everyone ran well.”

Though Hariz could only manage sixth place in the 100m final, the 2017 POL-ITE champion with a 10.71s personal best could not be more grateful to be competing on the track again.

He said: “Honestly, I was just waiting for this day since my surgery. It was a long process. Along the way I still had some problems here and there, but in the end I’m thankful that I managed to compete again.

“Obviously it was hard to replicate my previous personal best but slowly, along the way, I can get there.”

In the day’s other track events, NUS medical undergraduate Ang Chen Xiang capped off his sixth and final appearance in the annual IVP with his fifth straight gold in the men’s 110m hurdles, a streak which saw him set a new championship record thrice in the process.

This time, the national record holder (14.36s) equalled his 2017 IVP mark of 14.39s, as NTU duo Awyong Liang Qi and Ang Ding Hui, who is Chen Xiang’s younger brother and coach, completed the podium — with the former recording a huge personal best of 14.59s.