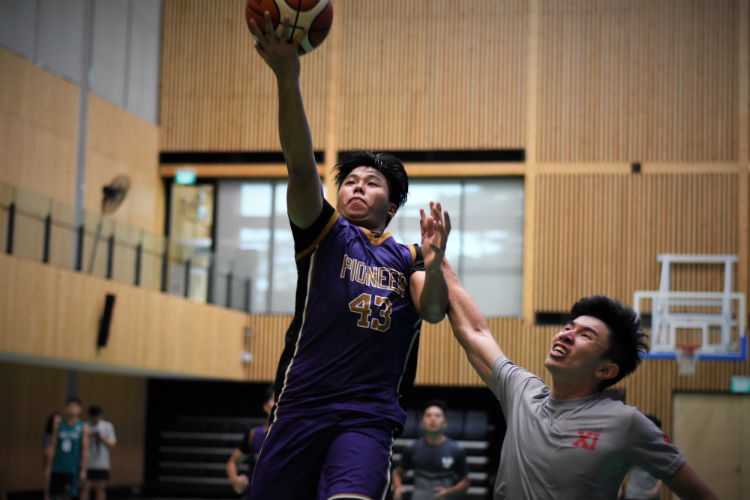 Pioneer Hall was led by Felix Teo (#43), who swished four three-pointers to tally a game-high 22 points. Brian (#2) chipped in 10 points for Pioneer Hall.

Hall 11, who were severely short-handed with only a 6-man rotation, was led by Jonathan (#18) in the scoring column with 5 points.

The opening quarter saw Pioneer Hall jump out to a 15–5 lead, as their staunch defense created transition baskets and ball movement created easy open looks for their half-court offense. Hall 11 on the other hand struggled to create offense, as turnovers plagued them, limiting scoring opportunities.

It was more of the same in the second period, as Pioneer Hall continued to dominate on both ends of the floor to extend their lead to 28–9 heading into the half-time break.

The third period saw Hall 11 put up a spirited performance, as they put up a spirited defensive display to limit Pioneer Hall to just nine points in the quarter, while putting up seven points for their highest offensive output in the game.

However, fatigue caught up with the Hall 11 players, as they found themselves outpaced by Pioneer Hall. At the final buzzer, it was Pioneer Hall that emerged as victors with a 52–18 scoreline.