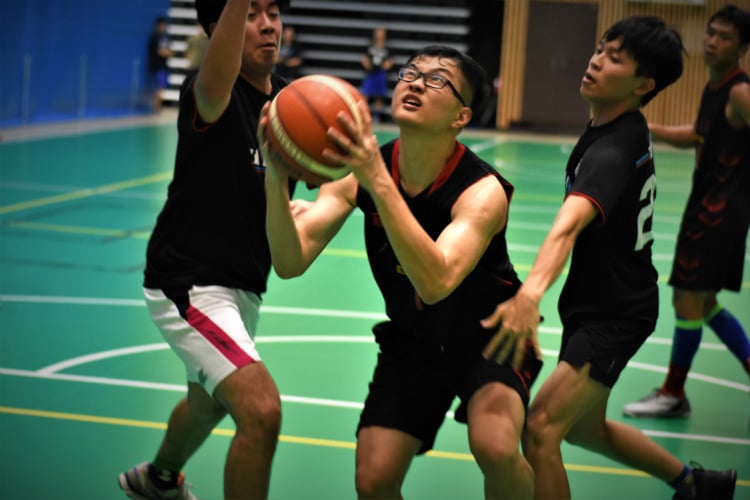 NTU Wave, Friday, January 4, 2019 — An 11-point performance and a clutch steal by Tang Kai Wei (#11) propelled Hall 8 past Hall 15 for a narrow 35–32 victory in what was a tightly contested match in the preliminary round of the Nanyang Technological University (NTU) Inter-Hall Games Basketball Championship.

“We were not composed on the offensive end,” commented Tang Kai Wei on the 0-point performance in the second period by Hall 8.

“However, we were able to settle into the game in the second half and started to make shots. We also performed better defensively after changing to a ‘box-and-one’ defense,” he added.

Hall 15 was led by Lionel Chua (#7), who put up a scorching shooting performance to drop 4 three-pointers en-route to a 17-point performance.

The opening quarter saw both teams trade baskets with each other as Hall 8 held a 10–9 advantage to close out the quarter, courtesy of a three pointer by Silas Lim (#5) in the final possession of the quarter.

The second quarter turned out to be a low scoring affair, as turnovers plagued both sides. Both teams also struggled to to make shots, with Hall 8 not adding any points to their tally while Hall 15 managed just four points in the second quarter to hold a narrow 13–10 lead at half-time.

The third quarter opened with a scoring explosion from #7 of Hall 15, as he caught fire from beyond the three-point line to tally 9 points on three treys.

However, Hall 15 were not able to shake off Hall 8 despite the scoring burst from Lionel Chua (#7), as Hall 8 moved the ball well and aggressively attacked the basket to generate 15 points in the quarter to hold a 25–24 edge heading into the final quarter.

The final quarter was an encore of the opening quarter, where both teams traded baskets with each other in a bid to gain control of the match.

In one sequence, Silas Lim (#5) drained a contested three over his defender to draw a response from the Hall 8 bench. However, Hall 15 responded on the following possession as Lionel Chua (#7) swished a deep pull-up three over the defense to give Hall 15 a 30–28 lead, driving the bench wild.

Just as Hall 15 seemed to gain control of the match, went on a 6–2 run to grab a 35–32 lead with less than a minute remaining in the ball game.

With Hall 15 having the final possession of the ball game, it was clear that they needed a three to force overtime. Putting the ball on the hands of Lionel Chua (#7), they ran a series of screens to give Lionel Chua (#7) an opportunity for a game-tying three.

Just as Lionel Chua (#7) managed to shake off his defender after a series of screens, Tang Kai Wei (#11) made a huge defensive rotation to come up with a clutch steal, sealing a 35–32 victory for Hall 8.