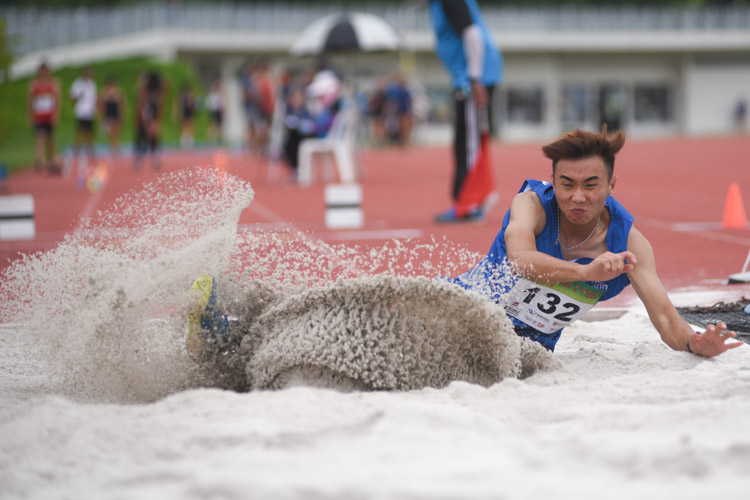 The 18-year-old said he did not train much and came into the competition without any specific targets in particular.

“I wasn’t aiming for anything because I was just like having fun,” he said after his win.

“I didn’t train much but then I listened to my teammates’ advice and they really were a good support team, they really cheered me on and gave me the motivation to really jump my best.”

Shawn started off slow and for much of the competition, it looked like Ephraim Soh of Republic Polytechnic would be walking away with the gold medal.

“It was a build up, every jump was getting better with my coach’s advice and I managed to pick up the advice and execute it,” explained Shawn, who added that he felt happy and relieved when he finally nailed the gold-medal winning jump.

Despite the back-to-back victory, Shawn said he is unlikely to return for his third title in the POL-ITE competitions next year.

“I’m not sure if next year POL-ITE I’ll be doing the triple jump. I might be going back to my main event, which is the 400m hurdles,” said Shawn.

Earlier in the competition on November 17, a couple of jump championship records were also broken.

In the Men’s high jump event, Brandon Heng of Republic Polytechnic broke the POL-ITE championship record with a winning jump of 1.96m — bettering the seven-year-old record of 1.95m set by Nanyang Polytechnic’s (NYP) Daryl Lee. Heng edged out the current defending IVP champion Syamil Hairul of NYP who came in second with a 1.85m jump.

In the Men’s long jump event, Darren Lee of Ngee Ann Polytechnic bettered his own championship record set last year by 0.01cm with a distance of 6.80m.