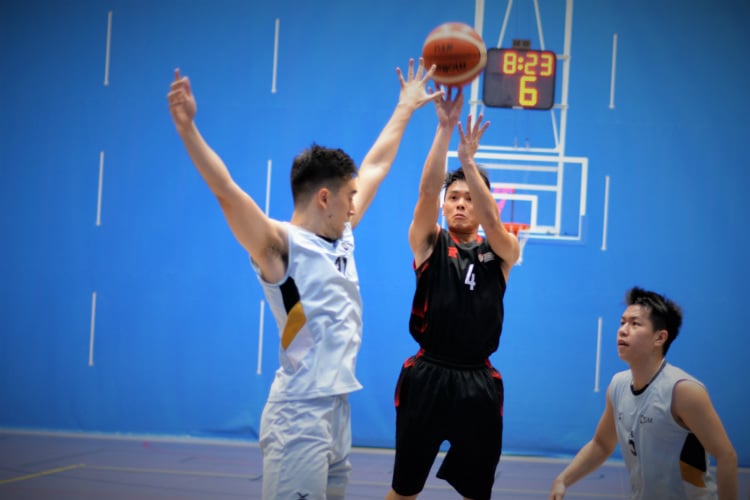 SIM got off to a quick 6-0 start which forced NTU to take a timeout. The timeout allowed NTU to compose themselves as they came out on a run of their own, quickly eliminating the lead that SIM had.

“I think our composure is better this game. For the last few games, we had a lot of turnovers, but in this game, in the first half, we managed to minimize our turnovers and protect the ball better,” said NTU captain, Seah Chin Seng (NTU #24).

NTU went into the second quarter with composure as they played good defense to limit SIM’s offensive prowess. Sim Jia Hao (NTU #4) scored 6 straight points, including a buzzer beater, to give NTU the 27-25 lead going into the half. He led the team with 16 points.

In the second half, NTU were able to go on a huge offensive run in the third quarter to increase their lead. They outscored SIM 22-14 in the quarter and took a 10-point lead at the end of the third.

Not wanting to lose, Ng Kian Hao (SIM #27) tried to will his team back into the game. He had a game-high 22 points. However, with time expiring, SIM’s efforts fell short as NTU took the game 61-58

Scott Driscoll (SIM #21), SIM’s captain, commented, “I think today we lost in terms of the effort. The 50-50 balls, I would say we aren’t as hungry as them and it showed on the court. Moving forward, firstly, I think we can improve on our team’s cohesiveness as a lot of us are playing division one and have national team commitments, so training as a full squad is actually quite rare. Hopefully, we can have that moving forward. Secondly, I think we can learn to trust the team a bit more, especially for me. I must be able to find the open man and identify the correct chances and not take them one v two. It is not over till the final whistle. I think we still have a good chance. So, we are going to go at it with full intensity and 150 percent of our efforts. So let’s get ready.”

Moving forward, Chin Seng (NTU #24) felt that the younger players can step up and be confident in their offensive plays, “I think our young players can get more minutes on the floor and improve themselves. For ourselves, seniors, when our own seniors graduated last year, we feel that our team’s scoring got affected a lot as our seniors were the one that carried our offense. I would like the juniors to be more active in the scoring role so that when us seniors graduate, they won’t feel the scoring deficit that we felt.”