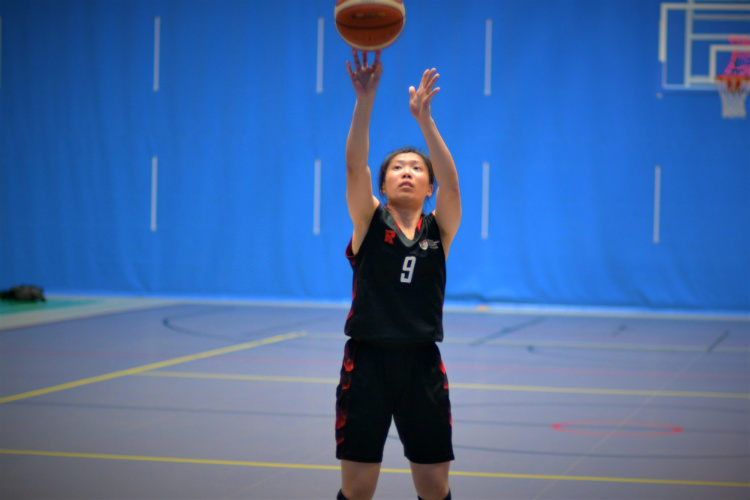 Amanda Lim taking one of her free throws during the match. (Photo 1 © Low Zheng Yu/Red Sports)

Amanda Lim (NTU #9) led her team in scoring with 17 points — including four from beyond the arc — as the home side cruised to their third win of the season. Despite the wide margin of victory, it was clear that NTU was still cautious entering the game.

“For NUS, they are known for their defence, so actually sometimes like even though we may be leading they’re still very active on the court and they won’t give us an easy time,” said Amanda, who is NTU’s team captain, after the match.

“So actually, we didn’t have the mindset of ‘okay lah we are going to go easy’ but rather we want to just play to our best and just put a score as much as possible.”

And the visiting team did live up to their reputation. From the tip-off, NUS was eager to show that they are not going to give any easy looks and fouled Choo Jieying (NTU #8) under the basket to force her to the line. And although Jieying converted her two free throws, NUS was showing their grit in defence.

NTU was no slouch either. The girls in black kept NUS at bay limiting them to single digits in the first quarter as they raced to a 16-8 early lead in the opening quarter.

For NUS, they entered the game knowing that NTU had strong inside players, said Leah-Diane Warden (NUS #13).

“We did try to switch out a bit with our defense because they have very strong inside players so we did try the Zone,” said Leah after the match.

“But then they also have very good corner threes so it was a bit hard for us to switch out also to a man-to-man,” she added.

In the subsequent quarters, NUS was unable to impose themselves in offence as they could only score six points in each of the second, third and fourth quarters.

Jieying (NTU #8) was a towering presence under the basket for the home side as she recorded multiple blocks throughout the game although the lanky forward eventually got into foul trouble towards the end of the game racking up four fouls.

Leah (NUS #13) believed that despite the loss, it was still a decent effort from her team. However, she said her team will still need to work on their communication.

“I think now the goal is just to get into Institute-Varsity-Polytechnic Games and perform well on the last game (of SUniG) because we only have SIT left to play.”

On October 4, NUS will play Singapore Institute of Technology while NTU will face off Singapore Management University.