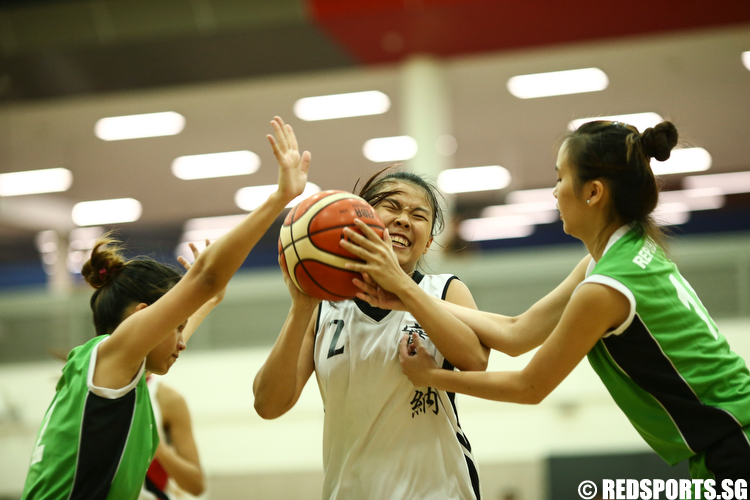 With this win, TP end their NYSI season with a 3-2 win-loss record. On the other hand, RP fall to 2-2 with one more group game to go.

Leading TP was the sharpshooting of Joanne (TP #2) as she drained two treys on the way to a team-high 10 points, while Sheryl Koh (RP #2) led RP with a game-high 11.

Syirin (TP #19) kicked off scoring with a trey, and Sheryl (RP #2) quickly answered back with one of her own. That trend would continue for the majority of the game, especially in the first half: whenever one team scored, the other would respond.

From the tip, RP began with a 2-3 zone defence, and with some timely help defence, prevented TP from scoring inside often. TP, identifying that, placed their emphasis on ball movement around the arc, swinging the ball left and right and left again to finally find open looks from range.

As for RP’s offense, most of their scores were coming from looks in transition. In the half-court set, where scoring was at a premium, the looks they generated beyond the arc were not falling. Despite being known as the shooter’s team, RP only managed one trey throughout the first quarter.

Their shooting woes would continue throughout the second, and although they managed to build a three-possession lead in the middle of the quarter, it was quickly snuffed out.

After a back-and-forth first half which saw both teams score nine and seven in the first and second quarters respectively, TP and RP were tied at 16–16.

TP began the second half with a suffocating full-court press, and their active hands could not stop deflecting passes to create steals and fast-break opportunities. However, they were unable to convert them into points, struggling mightily as RP took a two-possession lead by the end of the quarter’s end.

Joanne (TP #2) made sure her team did not fall too far behind, however, scoring seven out of the team’s eight in the quarter. It got to a point where RP’s Coach was shouting out to his players on the floor: “Don’t let TP #2 shoot!”

In the fourth quarter, it would be RP struggling to score, spending the first seven minutes or so without a single made bucket. Too many times, they managed to get the ball inside the painted area yet came up short. Defensively, they were aggressively jumping into passing lanes in an attempt to force turnovers, but to no avail.

TP was on fire, and the one setting them ablaze was a hot-handed Joyce (TP #11). With 3:31 left on the clock, she would drain her third straight three, enlarging the lead to 38–30 and forcing RP into a timeout.

RP needed a bucket, and fast. Finally, Tan Jun Xiu (RP #12) stopped the bleeding for RP with a three of her own, the team’s first points of the quarter. From there, they were able to force a shot-clock violation, but on the next possession, were forced into a shot-clock violation of their own.

With that same shot clock now off, RP had to foul to stop the clock. TP made their free throws, and just like that, the game was over – a 41–35 win for the home team as they ended their season in the NYSI Basketball League.

Safe to say, TP Captain Monica (TP #77) was happy with their final win: “I think my team did well in the last five minutes of the game, they managed to stay calm and had control over the game despite the close score… It was also good that the Year 1s stepped up and played with more confidence in today’s game.”

Meanwhile, for RP, they have one game to go, and Captain Fadzlia (RP #17) elaborated on what the team has to work on: “I think the team was a bit nervous and TP’s defence was not allowing us to make our shots. And that should change for our next game. We have to convert our shots, make every ball count and run through our plays like we always do during trainings.”

When asked about the experience in the NYSI Basketball League, Monica added: “I think it’s really good exposure and experience for the freshmen. The transition from secondary to polytechnic standard is pretty different, so this league actually lets them learn more. It also allows the entire team to gel and improve from our mistakes.”

RP will be hosted by Singapore Institute of Management in their final game on July 18, with tip-off at 7:30pm.