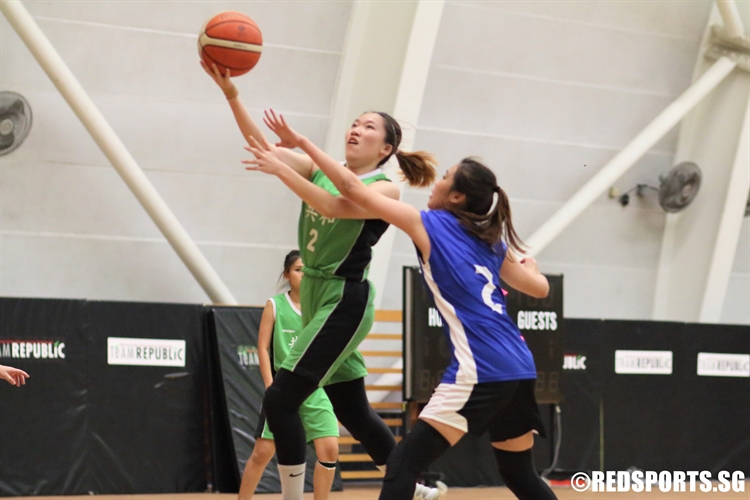 From the jump, it would be RP who set the tone with an 8–0 run in the game’s first four minutes. Playing a man-to-man defensive scheme, NP would find it difficult to provide help defence as RP repeatedly drove inside for easy points under the rim.

Sheryl Koh (RP #2) would be a big benefactor in this first frame, as she kept attacking the paint for 11 of her 16 points. Be it as a ball-handler, or cutter, she somehow managed to find her way to the hole again and again.

Ng Jie Yi (NP #2) would finally break their drought with an and-one layup, but that would be three of their mere seven points in the quarter, as RP blitzed them to a 21–7 first quarter.

Despite having their fair share of inside looks, RP’s staunch interior defence prevented them from scoring. Many a time, this would be due to the defensive effort of Desiree Lee (RP #24), as she went for every loose ball and contested every shot she could.

Into the second quarter, and again, a cold NP team spent another two and a half minutes missing shot after shot, until Jie Yi sank a three for their first points of the quarter. She would go on to score seven of the team’s 12 points in the quarter, and nearly half of her eventual 15.

RP were not slowing down, however. Desiree’s hustle was also showing on the other side of the ball, as she crashed the offensive glass for second and third opportunities. RP would find themselves up 35–19 by the end of the half.

The second half saw more of the same, with NP finding themselves dribbling inside and running into multiple RP defenders. They could not depend on their outside shot either, managing just two treys throughout the game’s final 20 minutes.

On the less glamorous end, NP found themselves in some foul trouble as RP relentlessly went at their interior defence for whistle after whistle. However, thanks to some careless turnovers by the RP offense, NP was able to make sure their deficit did not grow significantly larger, finally ending the game down 62–42.

“Our warm-up wasn’t good, we were very sloppy. Our first quarter was very bad, and because our morale was down, our tempo was also down. Also, we weren’t communicating,” NP Captain Leong Le Yi (NP #5) admitted.

On the contrary, Desiree Lee (RP #24) complimented the play of their opponents on the day: “I thought that NP really put up some good play today. It was a shock, because we did play against them before, in last year’s NYSI League and POL-ITE. They really came out with some shocking new plays.”

When asked about making improvements, she added: “Now, we really need to work on our stamina, because some of our players were down from cramps and stuff. And, we need to…get used to our shooting as that should help us in our next games against TP and SIM.”

Likewise, for NP, they know what they should be working on: “Communication, and we need to improve our warm-up so that everything is on-form from the first quarter. We shouldn’t need to warm up in the first quarter and pick it up in the second.”

RP will next be hosted by Temasek Polytechnic on July 16, with tip-off at 7:30pm. NP’s next game has yet to be confirmed.