NYSI Bball: Fast-paced, balanced scoring in transition for RP as they take down NP 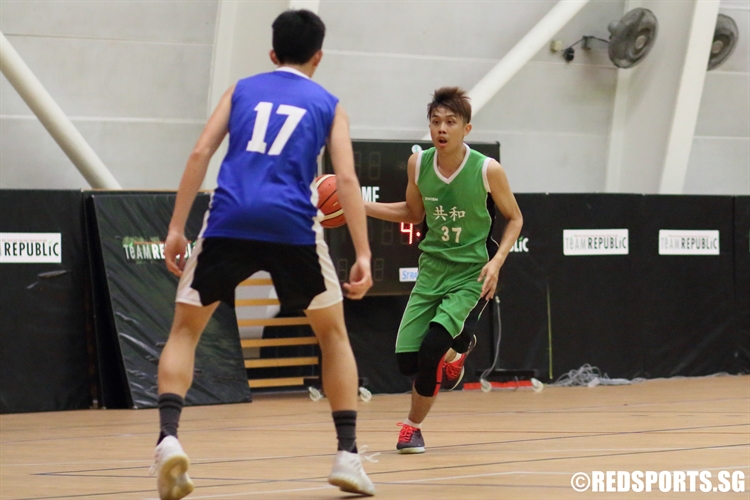 Tng Zhi Cai (RP #37) surveys the floor in transition. He poured in a game-high 15 points in the victory. (Photo 1 © Chan Hua Zheng/Red Sports)

Right from the get-go, RP took the fight to NP as Tan Cheng San (RP #9) scored on the game’s first possession. NP soon responded as Toshiro Murakami (NP #14) made a strong move inside for an and-one layup.

Both teams continued to trade buckets in an intensely contested first quarter, especially as both teams were playing a physical man-to-man defensive scheme. At its conclusion, they were tied at 16-apiece.

NP made a major change in the second quarter, switching up their defensive scheme from man-to-man coverage to a 2-3 zone. With this change, RP exploded for 29 points in the quarter, and the blowout was on.

This explosion could be attributed to Tng Zhi Cai’s (RP #37) multi-dimensional impact on the floor. Not only did he score eight of his 15 points in the quarter, he provided the playmaking for RP by drawing double-teams and making flashy passes to his teammates for assists.

RP went into the second half up by 16, but they were not slowing down, attempting to exploit NP’s zone defence to get out in transition and score easily on the fast-break. With RP Captain Desmond Loh (RP #32) scoring six straight throughout their run, they kept pushing the pace with another 23 points in the third quarter.

Not only that, but RP was finding ways to score in the half-court set as well. Finding the chink in the NP defence, RP found their way into the painted area, scoring repeatedly and drawing fouls to lengthen the lead.

Another stand-out performer in the second half was the two-way play of Mohamed Ismail (RP #11). With his length and verticality, not only could he score inside with his post moves, his interior defence was outstanding. Many a time, if RP’s bench was going wild, it may have been due to Ismail blocking yet another shot.

The fourth quarter was better for NP, as their perimeter defence pressed up on RP’s ball-handlers. This constant harassing caused the ball to be poked away multiple times, but NP was unable to convert on the other end, eventually scoring a mere six points in the quarter.

The game was over long before the final buzzer, but when it did sound, RP would take their second home win with an 88–43 victory over NP.

RP Captain, Desmond (RP #32), talked about how their game went: “At the start, we were quite cold, so we were a bit off. But gradually, we got the hang of it, and played pretty well…we started slow because we did not warm up properly and we did not have the right mentality.”

As for NP, Captain Bryan (NP #37) explained their mid-game switch-up: “Basically, this game was our first against this team, so we wanted to test out their strengths and weaknesses.”

When asked about how he thought it went, he replied: “I’d say it was okay, I wish we picked up some pointers, good or bad, from this game.”

In their next game, RP will be hosted by Temasek Polytechnic on July 16th, with tip-off at 8:45pm. NP’s next game has yet to be confirmed.