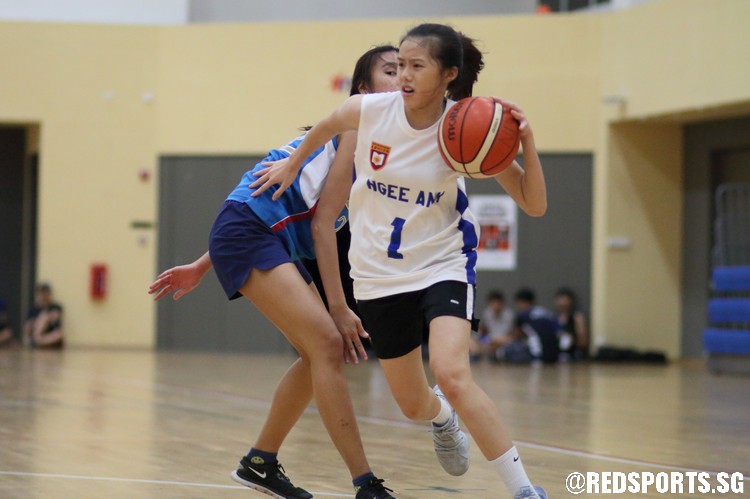 Valentia Wong (NP #1) drives by her defender. She finished with a game-high 13 points in the victory. (Photo 1 © Chan Hua Zheng/Red Sports)

From the get-go, NP’s defensive scheme was a well-practiced full-court man press. With good communication and attentiveness, NP was able to easily jump passing lanes, rack up some steals, and score easy buckets in transition.

In contrast, SMU was playing a 1-2-2 zone defence in the half-court set, and although it prevented many a NP score, they hardly got to showcase it. SMU were constantly forced into playing under-manned transition defence as they found themselves turning the ball over to the NP defence often.

This was where NP excelled, and in transition, they were able to pull down second and third opportunities off offensive rebounds even if they failed to score on their first attempts. After a one-sided 15–6 quarter, NP began to run away with the game.

Into the second quarter, and not much had changed. SMU was not passing the ball well and the long arms of the NP defence kept harassing the SMU ball-handlers, even forcing an eight-second violation and a shot clock violation.

The third quarter saw more of the same, as NP clamped down SMU for a measly five points in the quarter, while scoring another 15 of their own.

Thankfully, for SMU, NP decided to change up their defensive scheme in the final quarter, playing a 2-3 zone instead. This allowed them to break double-digit points in a quarter for the first time in the game, but not without a fight.

SMU’s attempts to feed the ball inside to their bigs were repeatedly denied by an effective NP defence, and on the other side of the ball, NP were making strategic plays both on the ball and off the ball to score in the restricted area.

After NP took a loss in their season opener, Captain Leong Le Yi (NP #4) told us they would work on their defence and rebounding. They definitely did that today, and she knows that: “Our defence was better, we had more steals today. However, when we suddenly changed defence to a full-court zone in the last quarter, a few of us were confused so it wasn’t as good as the previous three quarters.”

Whereas for SMU, Co-Captains Lui Si Xuan (SMU #11) and Lim Jie En (SMU #13) knows what went wrong for them today: “Actually I think our defence was okay, but it’s just that our attack needs more work…because most of our players are very new, so the aggression really isn’t there. So, a lot of times, we end up losing the ball to the opponents’ team just because we can’t protect the ball properly or we have no confidence to bring the ball up and attack…So that’s what we need to work on.”

SMU will play their next game away against Singapore Institute of Management on July 2, while NP plays Nanyang Technological University on July 3. Both games will tip-off at 7:30pm.