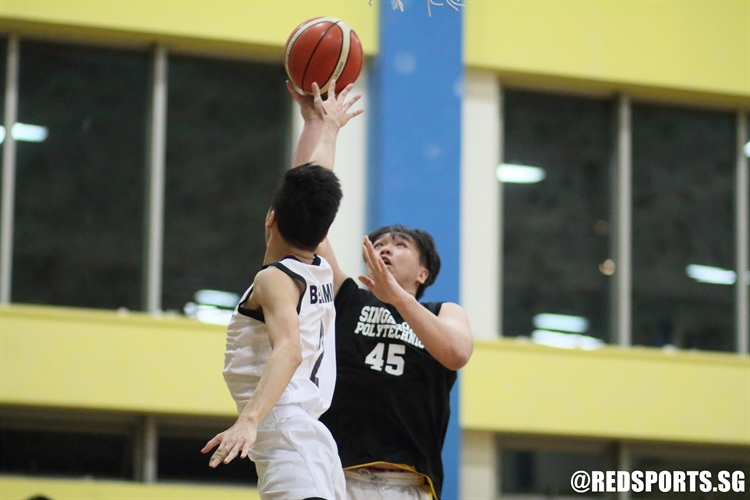 Lijiang (SP #45) rises for a floater over the defense. He finished with a team-high 7 points in the victory. (Photo 1 © Chan Hua Zheng/Red Sports)

With this win, SP are now 2-0 in the win-loss columns, having taken down Singapore University of Technology and Design in their previous encounter. On the other hand, this was ACSO’s opening game of the season, and they drop to 0-1.

SP had many players which contributed to the box score, but their leading scorer would be Lijiang (SP #45) with a team-high seven points. For their opponents, ACSO, they were led by the 16 points of Kelvin Frany (ACSO #7).

From the starting buzzer, it looked like ACSO were outmatched. Running an offence which focused on feeding the ball into the post and working it inside, ACSO found themselves matched up against the size of SP – size which they could not find a way past.

Aside from their interior defence, SP also employed a full-court press to their advantage, and after a one-sided first quarter, found themselves up double digits 18–8.

The second quarter saw the speed of the game pick up, with plenty of transition plays and fast-break opportunities. No doubt, this could be attributed to the sloppy passing by both teams, as many a time, it led to a careless turnover. Both teams traded baskets, and after a 11–12 quarter, SP held on to a 30–19 lead.

The second half began, and within its first eight minutes, a re-energised ACSO team went on a 16–5 run to tie the game at 35-apiece, thanks in a large part to Kelvin Frany (ACSO #7).

Not only did Kelvin score eight of his team’s 16 in the quarter, his constant penetration inside the restricted area helped create opportunities for his teammates as well.

However, it seemed that by the fourth quarter, SP had found the chink in the ACSO armour. As ACSO played at a slower pace, reliant on setting up their looks in the half-court set, SP played some fast and hard man defence to create turnovers and transition buckets.

It didn’t help that the tiring ACSO team were not taking care of the ball, and combining that with the lack of boxouts, SP were able to retrieve possession after possession to add to their lead. They finally ended the game with a 56–42 win.

After the game, a pleased SP Captain Jonathan (SP #10) commented on his team’s performance: “The team played very well. This is the second time we’re playing as a team, so, I think for a starting team, I think it wasn’t bad. But, there’s more to improve.”

As for ACSO, Captain Daryl Chung (ACSO #88) was just glad that his team was able to learn from the game: “So, it was a very good experience for us, and it gives both the coach as well as the team a lot to think about in terms of how we can do it better for the next game.”

He also shared on how appreciative his team was to be part of this NYSI League, saying: “It’s very interesting, offers a very different dynamic compared to the older or more traditional competitions for IHLs in Singapore. I think Oldham basketball is very grateful to be part of this, as we continue to build bonds with other IHLs in Singapore as well as to integrate with Singapore’s basketball ecosystem at large.”

ACSO will play against National University of Singapore, on their home floor, on June 22. Meanwhile, SP will host Nanyang Polytechnic on July 3. Both games will tip-off at 8:45pm.