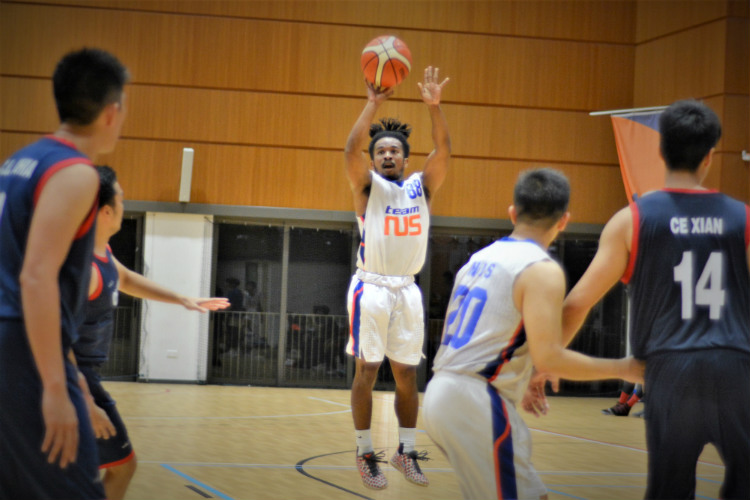 ACSO captain, Daryl Chung (ACSO #88), commented, “We are grateful to be here as part of the NYSI team together with the other institute of higher learning (IHL) teams which allow us to grow as a team. We are here to integrate with them and build friendships but most importantly we are here to grow as a team.”

ACSO got off to a great start. They played good defense which led to offensive opportunities. ACSO were able to score consistently and led 15-8 after the first.

Johrathan Cheok (NUS #2) who arrived late due to having another game prior to this showed his impact upon being inserted into the lineup. He controlled the pace and was able to get the NUS offense flowing. Within a few plays, NUS tied the game at 15 after back to back threes from Rolu Oyeknami (NUS #88) and Zhuang Bao Kun (NUS #4).

NUS were able to increase their defensive presence and score in succession to be up 21-18 at the half.

NUS carried the momentum into the third. They continued to play great defense on ACSO while scoring consistently. ACSO were not able to break the NUS defense as they started to rush their shots.

While Kelvin Ho (ACSO #91) had a game-high 12 points, the consistent scoring of NUS allowed NUS to eventually secure the 49-32 victory.

NUS captain, Lim Dao Han (NUS #24), commented, “We got to start the game better. We didn’t start the game well. Our shots weren’t falling but I think we made good adjustments when we transitioned from 2-1-2 zone to man-to-man defense about halfway through the second quarter. I think once we started to play man-to-man defense, that’s when the strength of the team really showed. We know we can guard guys individually and we managed to stop them. They had a 15-point first quarter and then after we switched up our defense, we held them to 17 points in the next three quarters. So, defensively, I think we did good and that translated into our offense in terms of transition layups. We still got to work on our half court sets, but this is a new team, so we are still trying to integrate everybody.”

Daryl Chung (ACSO #88) added, “Compared to the first game, we were a bit caught off guard. We had the intensity from the get-go. Even before the game, the guys were early for warm-ups and we got together as a team and had a very good start. Every game is a learning experience for us even though this is a very short season. NUS gave us a very good game and this was something we look forward to in terms of competition from all the teams, including NUS. It is good to be play in this new hall as well, it was a very nice game.”