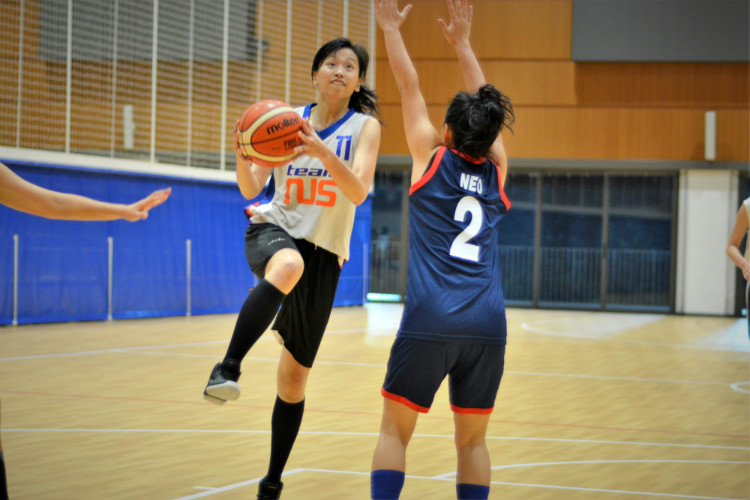 NUS got off to a good start. They played excellent full-court press defense and was able to contain and limit ACSO’s offense. As it was hard to sustain the full-court press for an entire quarter, the NUS coach did a five-player substitution every 3 to 4 minutes so that the NUS players could sustain their high-intensity defense and not affecting their ability to score.

This tactic paid off as NUS continued knocking down shots from beyond the arc. They made all their shots from the three-point range to lead 12-4 after the first quarter.

ACSO made use of the break to regroup and came into the second quarter determined to catch up. They were able to get defensive stops and convert on the transition to cut the NUS lead. Neo YingQi (ACSO #2) knocked down a three-point shot as ACSO were able to cut the lead down to one.

However, NUS continued to score after that and led 20-13 at the half.

Refining their defense, NUS upped the intensity of their full-court press defense in the third. They were able to force several turnovers and scored off those turnovers.

With no answer for the NUS defense, ACSO could not cut into the NUS lead. NUS eventually took the game 63-37.

NUS captain, Michelle Chew (NUS #12), commented, “We feel that the game was quite slow-paced, it takes quite a long time from the backcourt to the frontcourt. To challenge ourselves, we tried to full-court press to force some turnovers and quick points from that. At the same time, this allows us to train our communication and since we are going for an overseas event next week, our coach also wanted to push our stamina more. This is a new team, we haven’t had much training together so we lack in our chemistry on offense. After making the first step to a play, we will forget about the second step and this is something we got to work on.”

ACSO captain, Tan Ee Leng (ACSO #11), said, “We sort of better understand where we are lacking in and where we are strong at. So throughout the game, we improvised on our plays and things that we initially wanted to use at the beginning, we changed it based on how the team responded. It gives us the inspiration to work harder for the next game. We can also understand the pace of the opponent better and not to let it overrule our own pace. Communication within the team is also important as well as improvising on the spot.”