NYSI Bball: NUS get 66-39 victory against NYP in first match of season 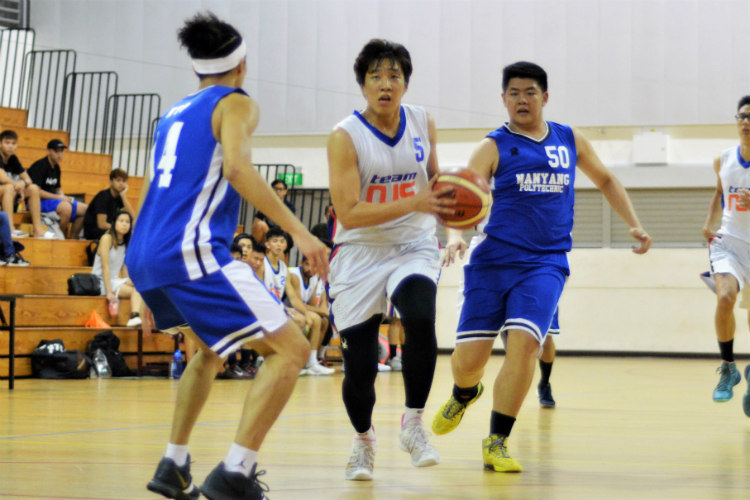 NUS have a 1-0 win-loss record while NYP falls to a 0-1 win-loss record. NUS will be facing Anglo-Chinese School (ACS) Oldham next while NYP will move on and play against Singapore University of Technology and Design (SUTD).

Being the first game of the season, with new teammates, NUS and NYP got off to a slow start. The chemistry was not there and shots were not falling despite several open looks for both NYP and NUS.

The game would be decided by the team that could overcome their chemistry issues faster and NYP showed signs of that towards the end of the first quarter. They played good defense and made their shots to be up 13-9.

However, the NUS players collected themselves during the break and started to get into their grooves. They played lock-down defense on NYP limiting them to only three points in the quarter while hitting a barrage of shots to gain an eight-point lead over NYP at the half.

With the momentum from the second quarter, Raymond Loo (NUS #13) knocked down two three-point shots which got the team fired up as they continued their good plays to stay ahead. Despite that, Wong Teng Yew (NYP #5) tried to will his team back into the game. He made tough shots to keep the score close, leading his team with nine points.

While NYP tried to stage a comeback, NUS proved too much for them to handle. NUS continued their stellar defense and continued to score. Han Jun Seo (NUS #5) had a game-high 12 points.

Despite that, NYP treated it as a learning experience. Captain Koh Jun Xiong (NYP #6) said, “We gained experience in terms of trying to execute the plays that we did during training. Other than that, we also played against the bigger sized opponents from NUS which was an experience as well.”

Clement Chan (NUS #17), added, “It was a mental game, but our focus for this game was more on the technical aspects. We observed that NYP did not really want to shoot the ball, so we sink in our defense and force them to do things that they didn’t want to do. We change the game tempo from there and attacked them at their weakness. Regarding the sharpshooting, we came to a consensus before the game that we must dare to shoot. If there is no courage to shoot, there would be no threat and without the threat, we would be a very easy team to defend. So, it all comes from the courage to shoot which we all agreed on.”

Despite the loss, Jun Xiang (NYP #6) hoped that the team would stay positive and work harder for their next game.