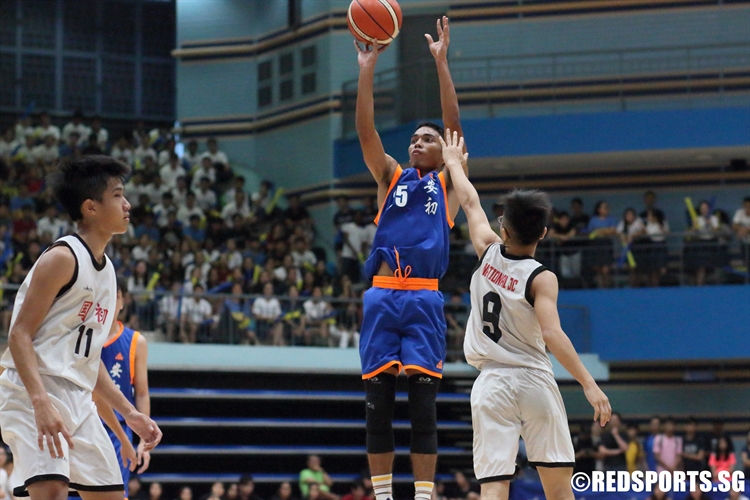 Ram Sunda Putra (AJC #25) pulls up for three over the defense. He tallied 16 points and bagged the MVP award in the victory. (Photo 1 © Chan Hua Zheng/Red Sports)

AJC’s Xavier Ng (AJC #13), who scored a team-high 21 points in last year’s finals victory, coincidentally scored 21 again to lead the team to the title. Close behind were teammates Keith Tan (AJC #21) and eventual Most Valuable Player (MVP) Ram Sunda Putra (AJC #25) with 16 each.

For NJC, swingman Huang Yi Fan (NJC #22) gave it his all in an extraordinary effort, scoring a game-high 25 points despite the loss. Teammates Nicholas Gao (NJC #1) and Ian Tay (NJC #10) added 13 and 10 respectively.

It was to be the end of a fairy-tale run for NJC, as they came into their first final ever as huge underdogs. For a team that had only three players with primary school basketball experience, NJC had to earn their wins with hustle, grit, and an impenetrable defence.

With that said, it was surprising to see NJC take the fight to AJC in the game’s first quarter. From the tip, they made sure to let AJC know it would be a fast-paced and physical forty minutes of basketball.

Early in the game, AJC made sure to protect their paint from the NJC onslaught, using their larger line-up to pressure inside shots. AJC had started off with three guard/forwards and two bigs, while the smaller NJC team had started with five guard/forwards.

But, as NJC came right at AJC, wave after wave, AJC were forced into the bonus with 5:57 left in the first quarter. NJC capitalized, making five free throws by the end of the quarter to tie the game at 13–13.

Be that as it may, AJC were still able to get buckets to prevent falling behind, ending the first half a mere three points down.

The second half began, and NJC seemed to have an endless supply of energy. Throughout the first five minutes of the quarter, they out-hustled AJC for the ball: diving for loose balls, grabbing weak-side offensive rebounds and the like.

With this disruptive defence, AJC kept finding themselves missing and-one opportunities. Three times in the quarter, an AJC player had been fouled on their shot, but they were unable to put the ball in the basket for the three-point play.

They were hitting their free throws, though, with Xavier Ng (AJC #13) sinking five in the quarter. Throughout those 10 minutes, he would score 14 of AJC’s 15 to close their deficit, entering the fourth quarter down by one.

Throughout the majority of the fourth quarter, both teams traded buckets, until a huge and-one play by Huang Yifan (NJC #22) put NJC up 55–54 with around two minutes left.

That lead would not last long, however, as Ram Sunda Putra (AJC #25) drilled a mid-range pull-up with a hand in his face to take the lead. As the clock ran down, both Xavier (AJC #13) and Ram made one of their two free throws, extending their lead to two at 58–56.

Once again, Yifan would make a big play for NJC. Cramping and barely able to lift his feet, he sized up his defender in an isolation play and penetrated into the paint for a score. This bucket would tie the game at 58-apiece with 8.5 seconds left.

On the final opportunity to score, AJC would go to their hottest hand, Xavier. But he missed, and the season’s final game of basketball would be extended by five minutes of overtime.

With a smooth mid-range fade-away, Ram would score the first points of the extra period. Ryan Ignatius De Mello (AJC #7) would extend that lead with a fast-break lay-up after NJC missed three shots in a row.

With time running out, Xavier found himself on the fast-break with only one defender in front of him. He stretched out his arm for a lay-up – and missed. But with his size, the swingman was able to tip the ball back up, twice, before it found the bottom of the basket.

That would be AJC’s final field goal, and with the clock counting down to triple zero, AJC successfully defended their National A Division Basketball Championship crown, earning a 66–60 win over NJC.

The season’s MVP, Ram, shared on what was the key to his team’s win: “I feel that our never-say-die attitude has helped us claim this championship, and we wanted to do that for our teachers since they are leaving.”

Down the stretch, it was AJC’s consistency and depth which led them to the win. Despite being constantly harassed by the National JC defence, they were still able to put up almost 15 points every quarter, and added eight in overtime. Their depth also meant that even as the game drew longer, they were able to put more fresh legs on the hardwood, in comparison to an under-manned NJC line-up.

The NJC team was gassed by the end of the fourth quarter, and without a bench to rely on, the starters could not rest and recoup enough energy for one final push. And when it mattered most, in the latter half of the overtime period, they could not hit their shots.

That should not take away from Yifan’s (NJC #22) incredible performance – he scored 20 of NJC’s last 21 as he tried to will his team back into the game.

NJC captain Lu Guan Yu (NJC #11), however, had a different take on the team’s last game: “We didn’t care whether we won or lost. We just wanted to play well together because most of us have been in here for six years together…We don’t really care if it’s the finals or a first-round game.”

When asked about the crowd support on the day, his answer was short and sweet: “Thank you to all our supporters.”

NJC teacher-in-charge, Mr Sham Das, added: “On behalf of the school and the leadership, they have been very supportive of the school teams. Despite having their exam period, many close friends of players came down to support the team. This final just showed how close the student body was, as well as the strong relationships between students and even staff. It was a great day for NJC.”