National A Div Bball (Girls): VJC edge out RVHS for 21–19 victory to close out season 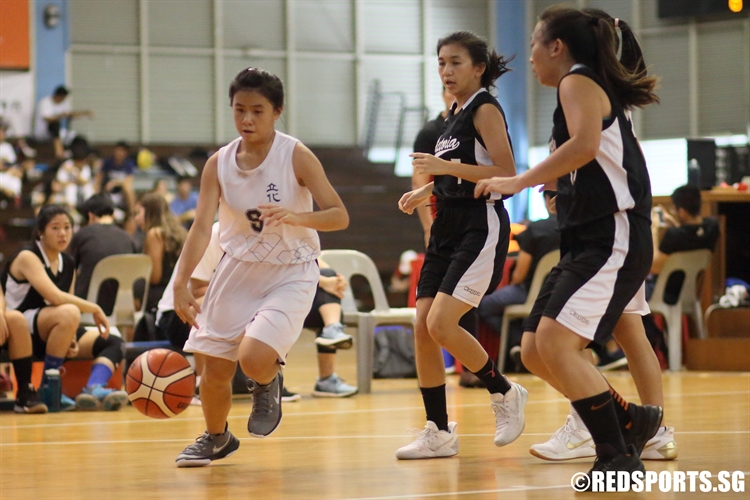 Singapore Basketball Centre, Wednesday, May 9, 2018 — In what was a low-scoring battle, Victoria Junior College (VJC) emerged with a slim 21–19 victory over River Valley High School (RVHS) in their final second round match of the National A Division Girls’ Basketball Championship.

VJC will end their season with a 1–3 win-loss record in Group X of the second round while RVHS will bow out of the tournament with a 0–3 record in the same group. Hwa Chong Institution and Nanyang Junior College emerged as first and second respectively in Group X to qualify for the semi-finals.

The first quarter was a low-scoring affair as both sides found themselves struggling to make shots against the opposing defence.

With 2:24 left in the quarter, VJC grabbed a 4–3 edge over RVHS after Rachelle Sim (VJC #15) converted a fast-break lay-up. However, the quarter will close with both teams tied at 4 apiece, after Petra Ng (RVHS #7) drew a shooting foul and made one of two free-throws with 1:39 left.

The second quarter would see both teams trade baskets throughout the quarter.

VJC relied on their ball movement to cause chaos on the RVHS offence and create open shots around the perimeter. On the other hand, RVHS resorted to aggressively attacking paint to create scoring opportunities in the paint and draw fouls for free-throws.

After Gabbie Er (RVHS #14) made one of two free-throws to give RVHS an 8–7 lead with 4:54 left, VJC close out the period with a 5–0 run that included a tough pull up three from Ong Sze Yan (VJC #7) that banked in off the backboard to grab a 12–8 lead heading into the halftime break.

RVHS would respond in the third quarter by aggressively attacking the paint and drawing shooting fouls for free-throws. RVHS would outscore VJC 8–5 over the period, including a 5–0 scoring run over the final 5:08 to cut VJC’s lead to just one heading into the final period.

RVHS would grab an 18–17 lead with 8:57 left in the fourth quarter, after Wang Shitong (#9) swished home a pull-up jumper over the defence.

RVHS would resort to pick and rolls on offence to create mismatches and scoring opportunities, while VJC continued to rely on their quick ball movement to move the defence out of position and create open shots.

With the game hanging in the balance, Cheryl Lee (#9) came up clutch for VJC, driving through the teeth of the RVHS for a running floater over the outstretched arms of the defence to give VJC a 21–19 lead with 2:52 left.

Facing a two-point deficit, RVHS had several opportunities to tie the game up over the final 2:52. However, a string of turnovers denied RVHS crucial offensive possessions and RVHS were unable to convert their final six shots to tie the game at 21 apiece and force overtime.

At the final buzzer, VJC would hold on to close out their season with a hard-fought 21–19 victory over RVHS.